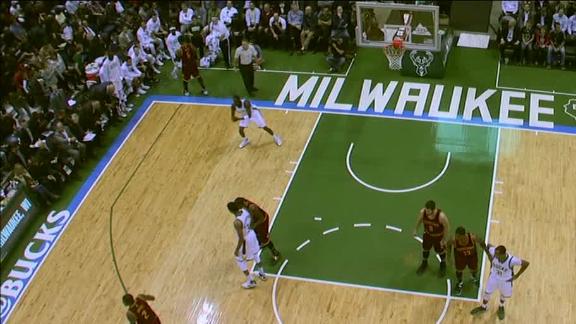 MILWAUKEE -- Following a blowout loss to the Bucks on Tuesday in a game during which J.R. Smith allowed a wide-open dunk because he was busy greeting a Milwaukee player on the sidelines while the ball was in play, the Cleveland Cavaliers guard pleaded ignorance when asked about the mistake.

"I wasn't even paying attention," Smith said of his hug with Jason Terry with 2:57 remaining in the second quarter that left Tony Snell with an uncontested path to the basket. "I don't even remember that."

The blunder certainly wasn't the main reason Cleveland lost -- it can blame its season-high 20 turnovers leading to 22 Milwaukee points and the 68 points in the paint it gave up -- yet Smith maintained his charade of selective amnesia.

"What play are you talking about?" Smith said when a reporter continued to ask him about the clip that had gone viral even before the game ended.

When the reporter described the play in detail, Smith replied, "I didn't even know I was in the game. My bad."

During the interview, Smith wore a ski mask-style cover over his face, only making his answers more bizarre.

Smith got the hood during the Cavs' trip to the Michigan-Ohio State football game over the weekend.

He was then asked if his alter ego had a name.

"I can't tell you," Smith said, as LeBron James chuckled while dressing at the locker next to him, causing Smith to laugh, as well.

Cavs coach Tyronn Lue was in a far less cheery mood after what was, unmistakably, his team's worst loss of the season.

"I just didn't like that we didn't match their physicality," Lue said after Cleveland saw an early 14-point lead turn into a double-digit defeat. "I thought they were physical from 1 through 5. They were physical, they played harder than we did and that's what happens. You give up 68 points in the paint, you don't get back in transition and this team scored 118 points with only seven 3s. So, 68 points in the paint -- we told them we had to protect the paint tonight, and we just didn't do it."

Things got so bad for the Cavs in the third quarter that Lue employed one of his boldest moves since becoming coach at midseason last year: He benched his entire lineup en masse to bring in five reserve players as substitutes.

"I just wanted to do it," Lue said of taking out Kevin Love, Kyrie Irving, Tristan Thompson, Iman Shumpert and James and replacing them with Chris Andersen, DeAndre Liggins, Mike Dunleavy, Jordan McRae and James Jones.

Pressed for his reasoning, Lue replied, "I just didn't like how we played, how we were playing."

Cleveland trailed by 11 when Lue made the move with 3:49 remaining in the third. By the end of the period, the Bucks' lead had ballooned to 18.

"He's our coach, and if he felt like we weren't giving the effort we needed to do, then he has the right to do that," James said. "Our guys that came in, they played as well as they could, for sure."

Lue went back to his starters with 10:56 left in the fourth and Cleveland down 15, but the coach pulled them back out for good with 6:03 remaining, when the Bucks pushed their cushion up to 22.

Asked whether he saw any change in his top unit after the lineup swap occurred, Lue scoffed, "Same results. ... You saw it."

While Love did not agree with a reporter suggesting Lue was "sending a message" with the move, the team accepted it, no matter Lue's motivation.

"Probably if I was a coach, I probably would have done the same thing," Irving said. "Even though the point disparity wasn't as big in the point of the game, but, I mean, we needed it. They were getting some easy looks, and you obviously know the coaches around the league -- probably one coach, in [Gregg] Popovich, [would] do it with his starting five and take them out just to prove a point.

James was ready to leave the loss in Milwaukee and focus on the back-to-back against theLA Clippersand Chicago Bulls awaiting the Cavs to finish the week.

"Move on," James said, as he pretended to crumple up a piece of paper and throw it in the trash. "Move on, move on.

"[In an] 82-game season, you're going to have one or two of these. I was looking at the scores after the game, and I see San Antonio is losing at home to Orlando right now. I know Pop is not happy about that. You just crumple it up and move on to the next."