Kaymer sets Open record, up by 6 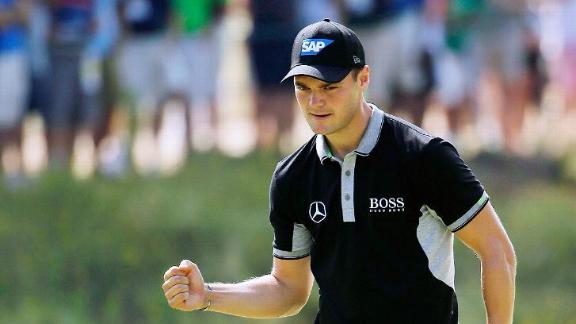 PINEHURST, N.C. -- Before the U.S. Open began, Martin Kaymer didn't think a score of 65 was possible at Pinehurst No. 2.

Now he has two of them.

The soft-spoken German, who broke American hearts when he sank the clinching putt at the 2012 Ryder Cup, is now making a mockery of the U.S. Open. He added another round of 5-under-par 65 on Friday to reach the halfway point at 130, a tournament record. He broke Rory McIlroy's mark of 131 set at Congressional in 2011.

Kaymer, who won The Players Championship last month and captured the 2010 PGA Championship, didn't make a bogey over the seemingly treacherous Pinehurst layout, where he holds a six-shot lead over Brendon Todd after the first two rounds.

"I played very well, I've had some good rounds in the past as well," said Kaymer, who was ranked No. 1 in the world in 2011. "But yesterday and today, especially today, the way I worked my way around the course ... I hit some smart shots. I didn't play too aggressive, and when I had a good number, I went for the flag and I didn't make many mistakes on the greens. I didn't 3-putt and made a lot of good putts."

He became just the sixth person in the 114-year history of the U.S. Open to reach double digits under par during the championship. Kaymer's six-shot lead after 36 holes tied the U.S. Open record first set by Tiger Woods at Pebble Beach in 2000 and matched by McIlroy at Congressional.

McIlroy went on to win by 8 shots at Congressional; Woods won by a record 15 at Pebble Beach.

"He's dialed in," said Keegan Bradley, who played with Kaymer during the first two rounds and is 8 strokes back. "He's as dialed in as I've seen."

"It's great golf for Martin," said Adam Scott, whose score of 67 was his best in a U.S. Open but he still trails by 10. "There are so many talented guys, and he's certainly one of them and he's confident enough after winning a big event already this year.

"And when you're playing like that, you want to just keep it going. So for him to come out today and back it up is super. If he does it for two more days, then we're all playing for second spot."

After making six birdies and a bogey on Thursday, Kaymer added five more birdies Friday without a bogey.

And his statistics tell the story. Kaymer hit 12 of 14 fairways and missed just three greens. Each time he failed to find the green in regulation, he was in a bunker, and got it up and down for par each time. He has yet to have a three-putt green in the tournament and took 29 during the second round.

"I heard he played the No. 3 course. Is that true?" Kevin Na said after a 69 put him seven shots behind. "It's unbelievable what he's done. Is 4 or 5 under out there? Yes. Ten under out there? No, I don't think so. I guess it was out there for him. I watched some of the shots he hit and some of the putts he's made and he looks flawless."

Kaymer is the first player in the history of all four major championships to open the tournament with two scores of 65.

"He's always been a really good putter," said Dustin Johnson, who shot 69 to finish at 138, 8 strokes back. "So obviously he's making a lot of putts, and to make putts you have to be hitting good shots. I think obviously, 10 under, his score speaks for itself, he's doing everything well."

Kaymer had his struggles with the game soon after reaching No. 1 in the world. He attempted to change his swing to help him hit a draw, a shot he felt he needed to compete at the highest level.

Before his Ryder Cup heroics, he was playing so poorly that there was talk about him giving up his spot on the team. He won later that year at a limited-field event in South Africa, but when he won the Players last month, it was his first significant victory since the 2011 HSBC Championship. Before that, he had fallen outside of the top 60 in the world.

"It's just very, very satisfying," Kaymer said. "I said to my caddie [Craig Connelly], there were a couple of shots today that I was surprised how good they were. Because I was not expecting to hit it that close, because it was a tough pin and all of a sudden you end up with a very good birdie chance and you would have taken 4 from the fairway.

"So I'm just hitting the ball very solid right now, and I think it's important to keep going and not try to relax. There's still a lot of stuff to improve on, but the way I played now is quite nice."

What appears to be a one-man tournament has a group of players with at least some hope heading into the third round. Todd, who won the Byron Nelson Championship last month for his first PGA Tour win, will play in the final group Saturday in his first U.S. Open.

Brooks Koepka, the American who is carving his way through the European Tour, birdied his last hole for a 68 and joined the group at 2-under 138 with Brendon de Jonge (70), Henrik Stenson (69) and former PGA champion Bradley, who played in the same group with Kaymer and rallied for a 69.

Kaymer Running Away At U.S. Open
Martin Kaymer's back-to-back rounds of 65 propelled him to a commanding six-shot lead at the U.S. Open.

Mickelson Struggles In Second Round
Phil Mickelson is 3 over at the U.S. Open after shooting a second-round 73.