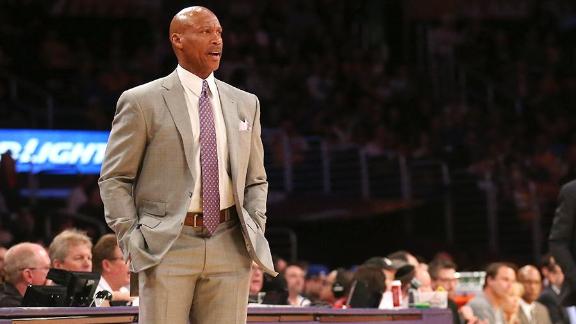 EL SEGUNDO, Calif. -- Six games remain for the Los Angeles Lakers during the worst season in franchise history, but Lakers coach Byron Scott is already targeting which players he wants to keep around going forward as the team works to rebuild.

"I got a sense of a whole lot of them I wouldn't want to be in a foxhole with," Scott said after practice Monday at the Lakers' facility. "I think they'd end up shooting me in the back. So I've got a pretty good sense of the guys that I think are going to be around, that we will build around, build together in this process and go through it."


Though Scott didn't name any players specifically, it's well-known that he especially admires Kobe Bryant and that Scott has criticized Jeremy Lin and Nick Young throughout the season.


Young, who has been sidelined with a fractured left kneecap, has been asked to become a more complete player by Scott, but the volume scorer told the L.A. Daily News earlier this week that he has taken Scott's criticism "with a grain of salt."


"Nah," Young said of buying into his coach's advice. "I don't know. I feel like it's just a target toward me. It's a little unfair. But it's cool."


Although the season is almost over, Scott still expects the players on his roster to perform, despite the fact that many know their futures with the Lakers are uncertain.


"The one thing you find out when you're having a season you're having, especially the last couple of games, you find out what guys are really made of," Scott said. "That's what I'm interested in finding out. I want to see how many of these guys that I would love to be in a foxhole with."

Byron Scott critical of several Lakers
Baxter Holmes discusses what Lakers coach Byron Scott has to gain by saying there are several players on the team that he "wouldn't want to be in a foxhole with."
Related topics:
sportsespnnick youngbyron scottnbalos angeles lakersjeremy linswaggy pfoxhole
Copyright © 2020 ESPN Internet Ventures. All rights reserved.
More Videos
From CNN Newsource affiliates
TOP STORIES