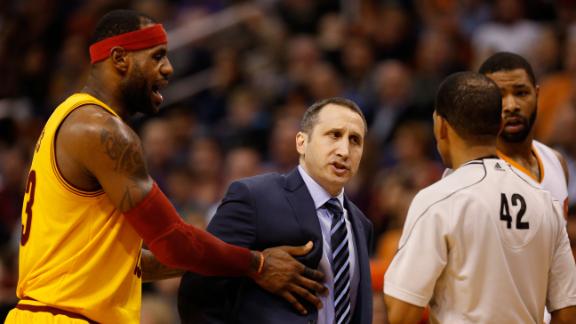 PHOENIX -- Ever since the start of the season, LeBron James' new-look Cleveland Cavaliers have been compared to his first campaign with the Miami Heat -- from the tricky balancing act of fitting together the Big Threes, to both teams' struggles out of the gate, to the relationships between the players and their coaches.

After Cleveland's 107-100 loss to the Phoenix Suns on Tuesday that dropped its record to 19-20, there's another point of comparison.

On Tuesday, James came in contact with David Blatt, shoving the coach back toward the Cavs' bench when Blatt came between James and a referee to argue an offensive foul called against James in the second quarter.

James and Blatt assured media the push looked worse than it really was. Both player and coach said James was simply saving Blatt from being called for a technical foul.

"I got called for an offensive foul, and they said I hooked one of the Morris twins on a post-up when he grabbed me," James said after the game. "It was a referee that was away from the play [who called it]. I was talking to Eric Lewis, one of the other refs, and Coach Blatt was getting a little fired up about it, too, and he was on his way to a technical. So I just got him up out of the way before he got a T. So, just protecting my coach."

"He was trying to keep me from getting a technical foul," Blatt said.

When a reporter suggested that usually it's the coach holding the player back from being whistled for a tech and not the other way around, Blatt retorted: "He wasn't arguing with the official; I was."

"Look, it's a physical game, and no disrespect to the officials, but I just thought my guy was taking a lot of hard hits and I didn't like it and I was expressing my opinion, and LeBron stepped in to I guess protect me in that situation, which is more than fine," Blatt elaborated. "But what I really wanted to do was protect him."

Play resumed without Blatt being T'd up. James continued to bark at Lewis as he backpedaled down the court on defense after the Suns inbounded the ball.

James couldn't shield the Cavs from their current slump, however, as Cleveland lost its sixth straight and racked up the 10th defeat in its past 12 games despite James' 33 points, seven rebounds and five assists in his return from a two-week rehabilitation session because of strains to his back and left knee.

While there was some rust to James' game -- he missed five three throws and had five turnovers -- he looked more much explosive than he did prior to sitting out.

For example, after just 27 dunks through his first 29 games this season, according to CBSSports.com, James had three dunks against the Suns, all of the highlight-reel variety -- a baseline reverse, a powerful putback and a tomahawk jam to punctuate a drive to the hoop.

"I couldn't make those moves two weeks ago," James said. "I know it. And for me be to be able to come back and feel [like] myself again was pretty cool."

After the Cavs trailed by double digits early, James' driving layup with 3:53 to go in the fourth gave them a 97-96 lead, but Phoenix finished the game on an 11-3 run to close Cleveland out.

The Cavs made their run late in the third quarter, led by James and J.R. Smith, who scored 15 of his 29 points in the period.

Their surge also happened to coincide with Kevin Love being benched.

When Tristan Thompson subbed in for Love with 3:52 remaining in the third quarter, the Cavs trailed by 18. Come the start of the fourth, the deficit was down to just six. And Love stayed on the bench the entire fourth quarter.

"It was what we did to try to get ourselves back in the game, to play small and to mismatch them, I thought it was successful," Blatt said of the substitution.

It was the second time this season Love was benched for the fourth quarter of a game, the last time coming in Cleveland's 98-89 win Dec. 26 in Orlando.

"It wasn't challenging," Love said after finishing with nine points on 3-for-11 shooting and nine rebounds in 27 minutes. "I know that both times, if you told me I was going to sit out the fourth quarter, maybe I would have thought it would have been tough. But we had a great rhythm going tonight. I thought the group that we had out there was doing a great job of getting us back into the basketball game, and more than anything, they gave us a shot. We just wanted to win a basketball game after dropping five or six in a row."

Tuesday was another loss, however.

And not long after it, Love met with Cavs general manager David Griffin for a face-to-face talk in the corridor leading to the Suns' practice court after the game before he entered the adjacent visitors locker room, where he spoke to reporters.

On Love's reaction to the benching, Blatt said, "He's a pro, and I'm sure he handled himself accordingly."

And according to Love, better times are ahead for the Cavs.

"We've woken up and we're ready to play," Love said. "We know that we're desperate for a win, and hopefully we can get one on Thursday."

Was LeBron's Shove A Big Deal?
Freddie Coleman and Jorge Sedano debate if LeBron James shoving coach David Blatt is a big deal and if there is a lack of respect between LeBron and Blatt.

Cavs Need More Than LeBron
Tim Legler breaks down why the Cavaliers relying too heavily on LeBron James will be their downfall. 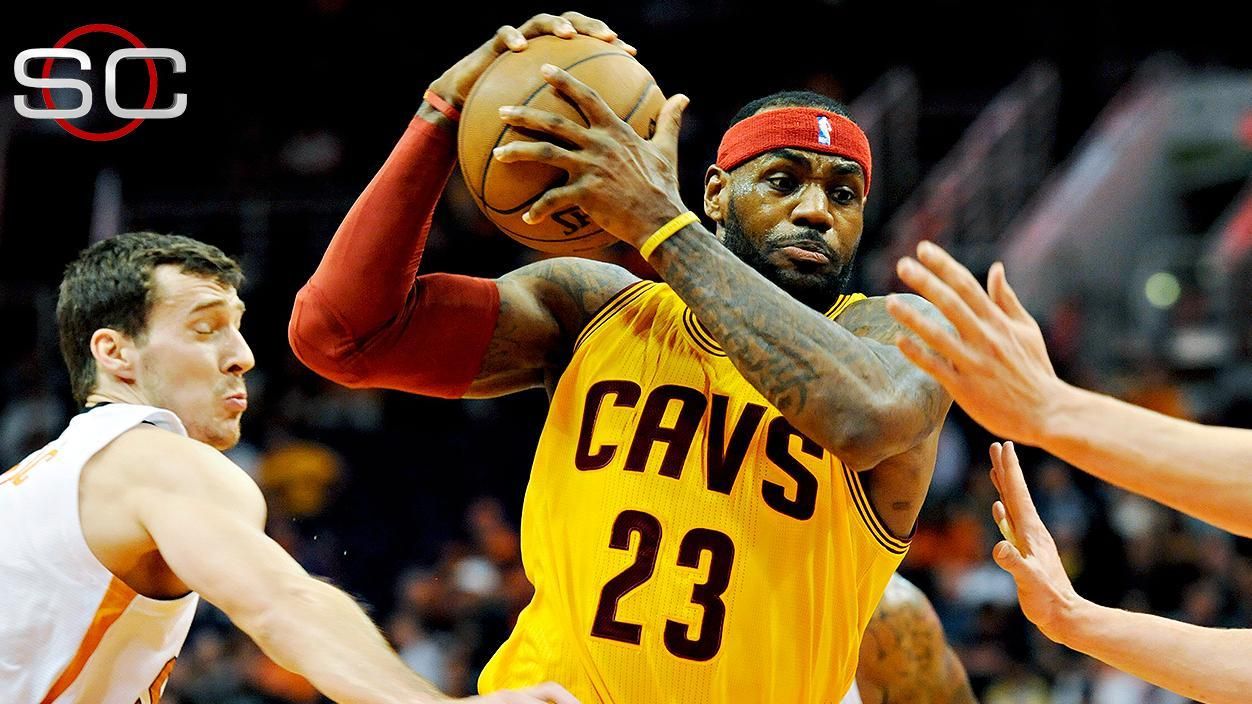