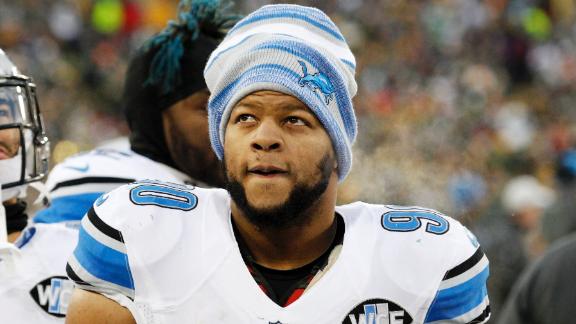 The Detroit Lions and Ndamukong Suh have been informed that the defensive tackle will be suspended for Sunday's wild-card playoff game against the Dallas Cowboys.

Suh's punishment comes a day after he stepped on the leg of Green Bay Packers quarterback Aaron Rodgers.

Suh "unnecessarily stepped on [the] opponent's unprotected leg as he lay on the ground unable to protect himself," according to a statement released by the NFL.

Suh is appealing the suspension, and his appeal will be heard by Ted Cottrell.

"He was getting pushed back, you know," Raiola said. "... There's no way at that point in the game that he did something like that on purpose."

"I don't know if you can put it into words," Ihedigbo said. "He's a dominant force in our defense. He's kind of the key centerpiece. We have faith in guys that can step up and fill that void and do the best job they can to get this win and help us out.

"It's unfortunate, whatever way you want to slice it. You're losing one of your best defensive players and one of the best D-linemen in the league, it's unfortunate."

If Suh's appeal is denied, Detroit would be without both of its first-round defensive tackle selections. Coach Jim Caldwell said Monday it would take "a miracle" for defensive tackle Nick Fairley to play against the Cowboys. Fairley has not played or practiced since injuring his knee against Atlanta in Week 8.

If neither Suh nor Fairley is available, the Lions likely would start C.J. Mosley and Andre Fluellen or Jason Jones at the defensive tackle spots.

This isn't the first time Suh has had issues with Green Bay. He was suspended for two games in 2011 after stomping on the arm of then-Packers center Evan Dietrich-Smith. Suh was also fined $100,000 last season for an illegal low block on Minnesota center John Sullivan.

If Suh is not allowed to play in Sunday's game and the Lions lose, it could be the end of the defensive star's time in Detroit, as he is set to become a free agent at season's end.

NFL Suspends Ndamukong Suh
Chris Mortensen reports the latest on Ndamukong Suh, who has been suspended for the Lions' playoff game against the Cowboys for stepping on Aaron Rodgers' lower leg during Detroit's loss to the Packers.