Maria Sharapova survives at US Open 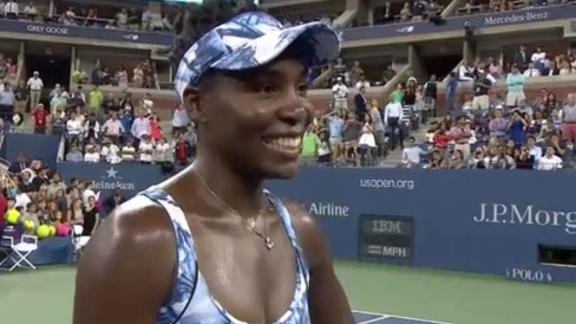 NEW YORK -- A year ago at this time, Maria Sharapova was sitting out the US Open, getting checked by doctors and having tests on the surgically repaired right shoulder that has troubled her off and on.

On Wednesday, Sharapova found herself down by a set and facing a break point early in the second at Flushing Meadows, bothered by the whipping wind, her own off-target strokes and an opponent who wasn't backing down.

As dusk fell and the Arthur Ashe Stadium lights came on, Sharapova came through the way she so often does in the crucible of a third set, beating 95th-ranked Alexandra Dulgheru of Romania 4-6, 6-3, 6-2 in the second round of the Grand Slam tournament she won in 2006 but has missed twice in the past six years.

Sharapova won in part because of her big shots, yes, but also because she had more in the tank when it mattered.

"Overall I felt like in the end I was in much better shape than she was and I could have played another few sets," Sharapova said. "Mentally that helped me a lot."

It helped that Dulgheru had played one set over the past five weeks because of inflammation in her right wrist, which was operated on in May 2013 and flared up recently.

Dulgheru, though, pointed to Sharapova's grit as a key factor, too.

"The thing is that she's smacking the ball and she's a fighter. ... It can seem that she's down, that she's tired, but she's there," Dulgheru said. "She can get mentally really tough. She hangs in there with you until the end."

Sharapova improved to 17-6 in three-setters this season, including four wins in a row that went the distance en route to the title at the French Open in June, her fifth Grand Slam trophy.

"It's really good to get through," said Sharapova, who faces 2013 Wimbledon runner-up Sabine Lisicki next. "Put yourself in a really tough position, but then you're able to find a way to get back and finish really strong."

She managed to do that on a day that was not easy for some other seeded women in the second round, although No. 19 Venus Williams, the 2000 and 2001 champion in New York, advanced with a 6-1, 6-4 victory over 78th-ranked Timea Bacsinszky at night.

Williams got to the third round at Flushing Meadows for the first time since 2010.

"As the tournament goes on, it will get tougher," Williams said.

No. 4 Agnieszka Radwanska, a finalist at Wimbledon two years ago, became the first man or woman seeded in the top 10 to lose, defeated 6-3, 6-4 by 39th-ranked Peng Shuai of China. And No. 21 Sloane Stephens of the United States had her earliest exit at the US Open, eliminated 5-7, 6-4, 6-2 by 96th-ranked Johanna Larsson of Sweden.

Stephens was largely her own undoing, compiling a whopping 63 unforced errors.

She was in such a hurry to get out of there that she briskly walked around the net to Larsson's side of the court for a handshake.

Stephens has failed to get past the second round at 11 tournaments in 2014, including the past two Grand Slam events. That follows a streak in which the 21-year-old American made it to the fourth round or better at six consecutive majors.

The US Open is the only Grand Slam tournament at which Radwanska never has made it to the quarterfinals. That includes another second-round loss to Peng, four years ago.

"I really want to know the answer," Radwanska said. "Then maybe I will find a way to play better here and just try another way to be in the second week."

Venus On Second-Round Win
Venus Williams discusses her win over Timea Bacsinszky to advance to the third round at the US Open.

Larsson Shocks Sloane
Johanna Larsson beat Sloane Stephens in three sets to advance to the third round at the US Open.

Peng Upsets Radwanska
Shuai Peng beat Agnieszka Radwanska 6-3, 6-4 to advance to the third round at the US Open.

Evert: The Hunger Isn't There
Chris Evert, LZ Granderson and Cliff Drysdale discuss Sloane Stephen's loss to Johanna Larsson in the second round at the US Open and what she needs to do to improve.