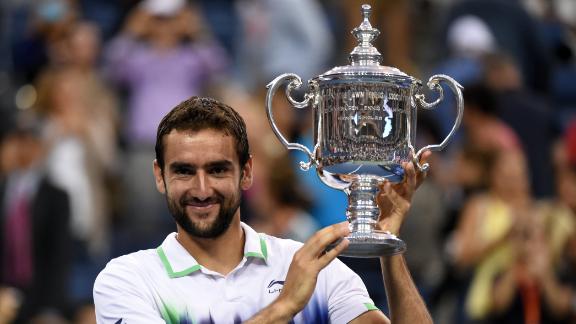 NEW YORK -- Marin Cilic was barred from last year's US Open during a doping suspension he still says was unjust.

Unable to compete, he watched the tournament on TV from his home in Croatia, while using the forced time away from the tour to improve under the tutelage of new coach Goran Ivanisevic.

The 14th-seeded Cilic won his first major final Monday, beating 10th-seeded Kei Nishikori of Japan 6-3, 6-3, 6-3 at the US Open by using 17 aces and the rebuilt game and confidence instilled by Ivanisevic.

"This is a second chance he got," Ivanisevic said, referring to Cilic's four-month ban in 2013, "and now he can just go forward and forward."

Cilic earned a $3 million winner's check and will rise to No. 9 from his pre-US Open ranking of No. 16, which made him the first man from outside the top 10 to win a Grand Slam title in a decade.

"This," Cilic said, "is (from) all the hard work in these last several years -- and especially this last year."

He prevented Nishikori from becoming the first man from Asia to win a major singles championship.

"Tennis has not been our biggest sport in Japan," Nishikori said. "Hopefully I can win next time."

There hadn't been a matchup between players making their Grand Slam final debuts at the US Open since 1997.

Lopsided and lasting less than two hours, this hardly qualified as a classic. It had been 40 years since a US Open men's runner-up failed to win at least four games in any set of the final.

"Both of us were pretty nervous in the first set, especially," Cilic acknowledged.

Cilic won the last 10 sets he played in the tournament, including three against 17-time major champion Roger Federer in the semifinals, and three against 2010 Wimbledon runner-up Tomas Berdych in the quarterfinals.

Nishikori stunned No. 1 Novak Djokovic in the semifinals, so this was the first Grand Slam final since the 2005 Australian Open without Djokovic, Federer or Rafael Nadal, who won the US Open in 2013 but is sidelined now by a wrist injury. That trio had won 34 of the past 38 major titles, but this was the second of this season that eluded them.

Some, including Cilic, had seen Stan Wawrinka's victory at the Australian Open in January as an indication that the next tier -- Cilic calls them "the guys from second line" -- was about to get a crack at the hardware.

Cilic tested positive for a stimulant at a tournament in Germany in May 2013. The International Tennis Federation initially sought a two-year punishment; Cilic wound up with a much shorter suspension on appeal. He said he ingested the substance unintentionally via a glucose tablet bought at a pharmacy and says the process that led to his penalty "wouldn't be fair to any tennis player."

But he looks on the bright side.

"I just used the positive parts, which, you know, made me tougher," Cilic said.

Plus, it was last September that he connected with the only other man from Croatia to win a major, 2001 Wimbledon champion Ivanisevic.

"Any Croatian knows where he was at that time," said Cilic, who was 12 and at summer camp.

Ivanisevic insisted the biggest change for Cilic is being more relaxed on court.

The Arthur Ashe Stadium artificial lights were on and the stands were mostly empty when the players walked out to the court at 5 p.m. -- which was 6 a.m. in Japan, but did not prevent folks there from gathering to watch on TV. There wasn't much to cheer for.

Cilic won 19 of his last 20 service points in the opening set. The biggest problem for Nishikori, really, was there were not many extended groundstroke exchanges -- and when there were, he tended to lose them.

He was off, whether because of the wind, the accumulated fatigue from a pair of four-hour-plus victories over No. 3 Wawrinka and No. 5 Milos Raonic, or perhaps knowing what was at stake for him, his country and his continent.

Nishikori only broke once, in the second set, and Cilic broke right back. In the third set, trailing 4-2, Nishikori had three other break points. But one was erased by an ace and on the others, Nishikori slapped second-serve returns into the net -- an escape Cilic termed "lucky."

Soon enough, Cilic was kissing his shiny silver trophy. Later, he cradled that cup as he walked into his news conference, which was interrupted by his constantly ringing phone.

"I feel," he said of his career-defining moment, "it's going to definitely change my life."

Five Things We Learned: US Open Men's Final
Greg Garber and Matt Wilanksy break down five things they learned from the men's final at the US Open.