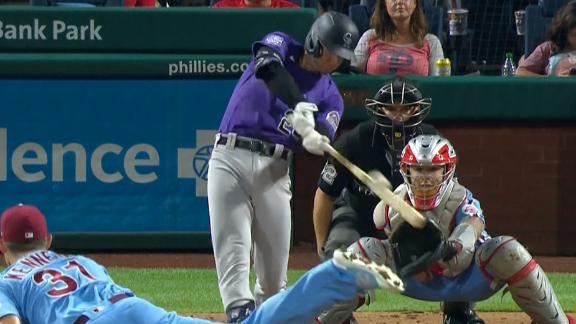 Bryce Harper hit his 30th home run of the season to bolster his MVP candidacy, and the Phillies looked as if they were going to start a pivotal home stretch with a victory before the bullpen blew their 30th save of the season.


The Phillies fell 3 games behind first-place Atlanta in the NL East with a soft home schedule in front of them. They play 13 of their next 16 contests at home against the Rockies, Cubs, Orioles and Pirates, who began Thursday a combined 113 games under .500.

With a 2-1 lead, closer Ian Kennedy (1-1) retired the first two Colorado batters in the ninth.

After Colton Welker singled, McMahon drove an 0-2, 80-mph curveball over the wall in right to put Colorado ahead 3-2. Hilliard followed with a long drive to right.

"We're trying to play spoiler," McMahon said. "That's going to be our gig. It was a lot of fun spoiling tonight."

It was Kennedy's third blown save of the season and second since the Phillies got him from Texas in a trade on July 30.

"It hurts a lot," he said. "We can't change it. We have to come out and play better tomorrow and find a way to put a streak together."

Welker, a highly touted prospect, had a pair of singles, including his first career hit and RBI. Colorado snapped a four-game losing streak.

"That was a good win," Colorado manager Bud Black said. "Our guys have done a really good job of playing the entire game. To come here against a team that's biting at the heels of the Braves in a playoff spot and our guys played them toe to toe. It's awesome."


Lucas Gilbreath (1-1) pitched a scoreless eighth, and Carlos Estévez got out of a jam in the ninth to earn his sixth save.

The Phillies put runners on second and third with one out, and Didi Gregorius' groundout scored Brad Miller and pulled Philadelphia within a run. Estévez struck out pinch-hitter J.T. Realmuto to end it.

Harper is doing all he can to lift Philadelphia into its first postseason appearance since it won the last of five straight division titles in 2011.

The 28-year-old slugger connected for an opposite-field, solo drive to left in the first off Antonio Senzatela. It was the fourth homer in five games for Harper, who now has 30 or more homers in four of his 10 seasons. Harper won the 2015 NL MVP with Washington.

After Welker's RBI single tied it in the fourth, Harper helped Philadelphia take the lead in the sixth. His one-out drive to right bounded high off the wall for a single that put runners at the corners, and Miller followed with an RBI grounder.

Phillies starter Ranger Suarez continued his strong season and now has a 1.38 ERA in 78 innings as a starter and reliever. The left-hander gave up one run on five hits with six strikeouts and a walk.

A day after making his major league debut in Colorado's 7-4 home loss to San Francisco, Welker got his first career start, batting sixth and playing third. He lined a two-out single to center for his first career RBI and singled with two outs in the ninth.

Welker was suspended 80 games by the commissioner's office in May after testing positive for the performance-enhancing substance Dehydrochlormethyltestosterone (DHCMT), which is in violation of Major League Baseball's Joint Drug Prevention and Treatment Program.

Rockies: OF Yonathan Daza (left thumb laceration) was activated from IL prior to the contest. Daza, who last played on Aug. 16, hit seventh and started in right field.

Phillies: Realmuto (rest) was not in the starting lineup. The catcher has been dealing with a sore right shoulder. He is expected to be back in the lineup on Friday.

RHP German Marquez (11-10, 4.08) starts for the Rockies in the second contest of the four-game set. The Phillies are going with a bullpen game.