Mets' Steven Matz pitches into 8th, goes 3-for-3 with 4 RBIs in debut 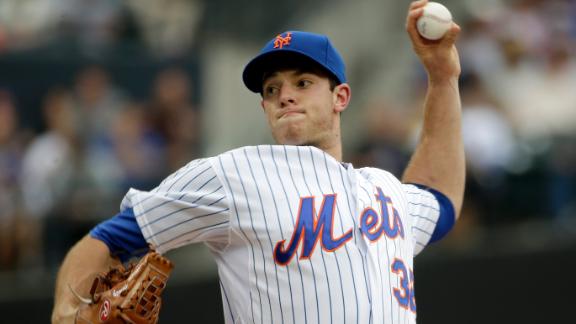 NEW YORK -- Highly regarded prospect Steven Matz tried to relax as he took the mound 50 miles from his Stony Brook, Long Island, home for his major league debut. Yet pitching for the team he cheered for as a child, the 24-year-old Matz's first pitch -- a 96 mph fastball to Brandon Phillips -- nonetheless traveled wildly off course, nicking catcherJohnny Monell's glove and traveling to the warning track behind the plate.

"I was telling myself to just take it easy and it still almost sailed to the backstop," Matz said.

Matz could laugh about it afterward.

Although he ended up surrendering a game-opening homer to Phillips, Matz ultimately led the New York Mets to a 7-2 win against the Cincinnati Reds on Sunday.

Matz limited the Reds to two runs on five hits and three walks while striking out six in 7 innings in his major league debut. Yet manager Terry Collins was more thrilled with the offense Matz provided. The southpaw drove in four runs, the most ever by a pitcher in a debut in major league history. It also was the most RBIs by a Met -- pitcher or position player -- in a major league debut in franchise history.

"I love hitting, so it's pretty cool to have that record," Matz said.

The Mets had scored only 15 runs in their past 10 games.

Matz's first major league at-bat became a two-run double against fellow rookie Josh Smith that glanced off retreating center fielderBilly Hamilton's glove and staked the Mets to a 2-1 lead in the second inning.

Matz used a bat that Triple-A shortstop prospect Matt Reynolds had given him after Matz learned he had been promoted to the majors. The southpaw finished 3-for-3 with the 33-inch, 31-ounce Chandler model MR243 lumber.

"I don't like to be an easy out up there as a pitcher," said Matz, who hit .304 in the Pacific Coast League this season in addition to posting a league-best 2.19 ERA.

Matz's arrival to join Matt Harvey, Zack Wheeler, Jacob deGrom and Noah Syndergaard in the majors completes a rejuvenation of the Mets' rotation, although Wheeler will not return until next summer from Tommy John surgery. The Mets are currently using a six-man rotation that also includes Bartolo Colon and Jonathon Niese.

Matz grew up a Mets fan in Suffolk County. He had 130 family and friends attend Sunday's debut. He became the first Long Island high school pitcher to make his major league debut with the Mets since Ray Searage in 1981.

His debut took longer than planned to begin.

Matz originally was due to throw the first pitch at 1:10 p.m. ET Sunday.

However, Saturday's game was suspended after six innings by rain, and instead was rescheduled for Sunday at that time. Matz's debut was due to begin 30 minutes after the suspended game's completion.

The suspended game started 20 minutes late on Sunday because of more rain. Then it went 13 innings, with the Mets going 0-for-15 with runners in scoring position in a 2-1 win.

Matz, who arrived at Citi Field at 8:40 a.m., finally took the mound eight hours after reporting to the clubhouse.

"I was just hanging in the clubhouse, trying to stay ready," Matz said. "Any time we got a runner in scoring position, I started stretching. ... It wasn't too bad. The good thing is, a big clubhouse, you've got comfortable couches in there and stuff."

After his first major league pitch all but reached the backstop, Matz went to three balls on Phillips. Eventually, Matz put a ball over the plate, which Phillips crushed. The shot struck the railing above the left-field wall. The umpiring crew originally ruled the ball in play and Phillips stopped at first base. But replays on the center-field scoreboard made it clear to Matz and the 29,635 in attendance that a home run would be awarded after a review. Matz also allowed a fourth-inning solo homer to Todd Frazier, but no other damage.

Matz said he felt comfortable, not more edgy, after the game-opening long ball.

"I was just happy that first batter was out of the way to kind of get my feet under me," he said. "I was really just trying to throw it right down the middle. Those first couple of pitches were pretty jittery."