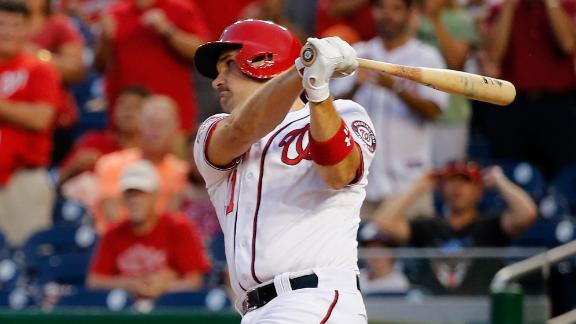 Not only wasBryce Harperin the Washington Nationals' lineup Thursday, one day after leaving a game early against theSt. Louis Cardinalswith tightness in his left glute, but he scored four runs without recording an official at-bat in the Nationals' 15-1 rout of theAtlanta Braves.

Harper, batting third and playing center field, saw 20 pitches and didn't swing once, drawing four walks. He became the second player in the majors this season to have multiple games with at least four walks, joiningArizona Diamondbacks first baseman Paul Goldschmidt, who has three such games, according to ESPN Stats & Information.

Only 41 percent of the pitches Harper has seen this season have been in the strike zone, the second-lowest percentage in baseball.

Harper also collected an RBI with his bases-loaded walk in the second inning, upping his season total to 78. He is hitting .331 to lead the National League and has 31 home runs.

According to ESPN Stats & Info, the last player to record four-plus walks, four-plus runs and one or more RBIs in the same game wasDerrek Leein 2002, with the then-Florida Marlins.

The Elias Sports Bureau notes Harper is the first player to have two career games with four walks before age 23 since Morgan did it in 1966.

Manager Matt Williams said before the game that Harper would get physical therapy and go through his normal pregame routine.

Also, Stephen Strasburg, who has been slowed by a back problem,threw a bullpen session and is expected to rejoin the rotation next week against the New York Mets. Tanner Roark will start Friday night in Strasburg's place.

On Thursday, Moore pinch hit forJayson Werth, going 1-for-2 with a double and run scored. In 80 games this season, Moore has hit .204 with four homers and 22 RBIs. He'd been out with a sprained left ankle.

The Nationals trail theMets by six games in the NL East.