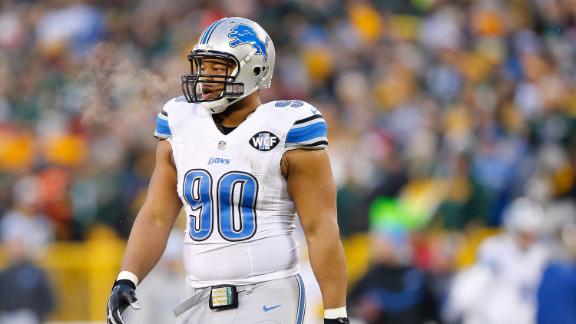 Detroit Lions defensive tackle Ndamukong Suh had his one-game suspension overturned by appeals officer Ted Cottrell on Tuesday, a day after the NFL suspended Suh for Sunday's playoff game between the Lions and Dallas Cowboys.

Suh was suspended by the league for stepping on the calf and ankle of Green Bay Packers quarterback Aaron Rodgers during the Packers' 30-20 win over the Lions on Sunday.

The league suspended him, saying Suh "unnecessarily stepped on [the] opponent's unprotected leg as he lay on the ground unable to protect himself."

Suh considered the appeal hearing so important that he attended it at the league office in New York, league sources said.

Suh explained his conduct to Cottrell and answered questions directly.

Cottrell agreed with league official Merton Hanks that Suh committed a violation of the player-safety policy in stepping on Rodgers but reduced the penalty, the sources said.

While Rodgers did not say explicitly that he thought Suh's actions were intentional, he did have serious doubts as to how they could be viewed as accidental.

"The only thing I can say is if you step on something in your everyday life or if you step on somebody on the field," Rodgers said Tuesday, "the first reaction seems to be looking back and maybe apologizing with your hands or maybe pulling your foot back right away, and I'm just not sure that's what happened on Sunday."

Lions players came to Suh's defense Monday after learning about his suspension, saying he was a changed player and that he had not caused any trouble this season and played within the rules.

"He was getting pushed back, you know," Lions center Dominic Raiola said. "... There's no way at that point in the game that he did something like that on purpose."

A new formula removed Suh from the "repeat offender" list after Week 16. Suh's last violation was in Week 1 of 2013, when he was fined $100,000 for an illegal chop block on Vikings center John Sullivan. That was the biggest fine in NFL history for on-field conduct.

According to NFL rules, a player who goes 32 games (including a maximum of two preseason games) without a violation is removed from the list.

Thus, his history as a repeat offender was never cited in this week's case.

Suh had been fined eight previous times and has one previous suspension, for two games in 2011, for stepping on the right arm of Packers lineman Evan Dietrich-Smith. This is his first fine for 2014.

"The repeat offender policy has been modified for 2014 in terms of what a player must do in order to be removed from the 'repeat offender' category. Specifically, any player who violates a safety-related rule will be considered a potential repeat offender and will be treated as such should he commit a further violation during a subsequent period of 32 consecutive games. After that period, the player will no longer be considered a potential repeat offender and will be subject to discipline as a first-time offender should he commit an additional violation. For the purposes of calculating the 32-game period, preseason, regular season, and post-season games will be counted; however, only two of the 32 games can be preseason games."

Interestingly, the rule also provides that players are notified of their status by the first game of the regular season, so Suh knew he'd be off the repeat offender list after Week 16.

For his career, Suh has been fined over $200,000 by the NFL, and his 38 penalties are the second-most by a defensive lineman since 2010, according to ESPN Stats & Information.