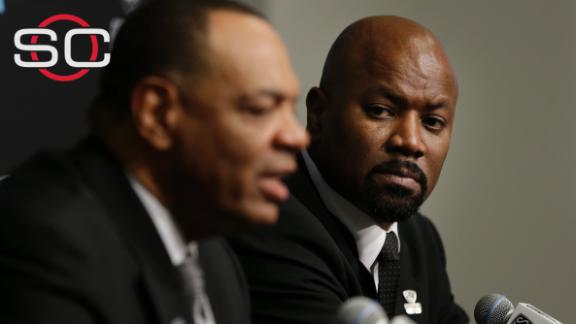 NEW YORK -- Billy King's bold moves often seemed made with little regard for the future.

The Nets reassigned their general manager and fired coach Lionel Hollins on Sunday in the midst of their worst season since moving from New Jersey.

The Nets said assistant Tony Brown will serve as the interim head coach and the GM position will remain open until a replacement is hired.

"It's clear from our current state of affairs that we need new leadership," owner Mikhail Prokhorov said in a statement. "With the right basketball management and coach in place, we are going to create a winning culture and identity and give Brooklyn a team that it can be proud of and enjoy watching."

Nets assistant coach Paul Westphal, who is close with Hollins, also announced on Facebook that he would not be with the team anymore.

Hollins said he received a call from King informing him of the news.

"I'm thankful to Billy and Mikhail and Dmitry [Razumov, Nets board of directors chairman] for the opportunity to have coached the Nets," Hollins told ESPN.com's Mike Mazzeo. "I'm disappointed to where it didn't work out to where we didn't have playoff success and fans weren't celebrating in the streets of Brooklyn."

Behind the scenes, Nets hierarchy had been looking potential replacements for King and Hollins, and had been considering this for a while, sources told Mazzeo.

There are no immediate plans to replace King as GM, sources told Mazzeo. It is unclear who is making the final call on matters such as player personnel decisions.

Part of King's role moving forward will be aiding the team's search for a new GM to replace him, sources confirmed to ESPN. The news was earlier reported by Yahoo! Sports.

Hollins has 1 seasons left on his contract, while King is in the final year of his deal.

The Nets have lost four in a row overall and nine straight at home, where attendance has dwindled at the $1 billion Barclays Center. The Nets made the playoffs every year since relocating for the 2012-13 season, but they are 10-27, better only than the league-worst Philadelphia 76ers.

King had been GM since 2010, orchestrating a number of high-profile moves that led to just one playoff series victory. Hollins was in his second season as coach.

Only Johnson remains, as the Nets decided to cut costs after at one point owning the largest payroll in league history. But they haven't been competitive now and have little hope of a quick fix in the future, as their first-round pick next season goes to Boston as part of the payment from the deal that brought Pierce and Garnett in 2013.

"At every step of the way, he has been aggressive in his quest to build a winning team and has been a key factor toward the Nets making the playoffs for each of the last three seasons," Prokhorov said of King.

Prokhorov is scheduled to hold a news conference Monday. The Russian billionaire recently agreed to a deal with developer Bruce Ratner to buy the remaining portion of the team he didn't already own and now wants to strengthen it.

"We have learned a great deal during the past six years and our experiences will guide us for the future," Prokhorov said. "Following the consolidation of team ownership last month, I can assure you that I'm more determined and committed than ever to build a winner."

King's win-now approach to deals started with the package sent to Utah in 2011 for Williams, whose contract was bought out last summer with two years remaining. A swap with Portland for Gerald Wallace cost the Nets the pick that turned into Damian Lillard, and they don't control their own first-round choice until 2019 thanks to the trade with Boston.

Hollins went 48-71 and, like predecessors Avery Johnson, P.J. Carlesimo and Jason Kidd, didn't last long in Brooklyn. The former Memphis Grizzlies coach got the Nets to the No. 8 seed in the Eastern Conference last season, but they dropped their first seven games in this one and haven't won at home in a month.

Those home struggles and a roster loaded with lesser names have created a big drop in interest in Brooklyn, where there have been empty seats all over the arena this season. It will be hard for the new regime to change much quickly, unless the Nets can score a big name in free agency.

Prokhorov thanked the fans in his statement and said bright days are ahead.

"We have learned a great deal during the past six years and our experiences will guide us for the future," he said.