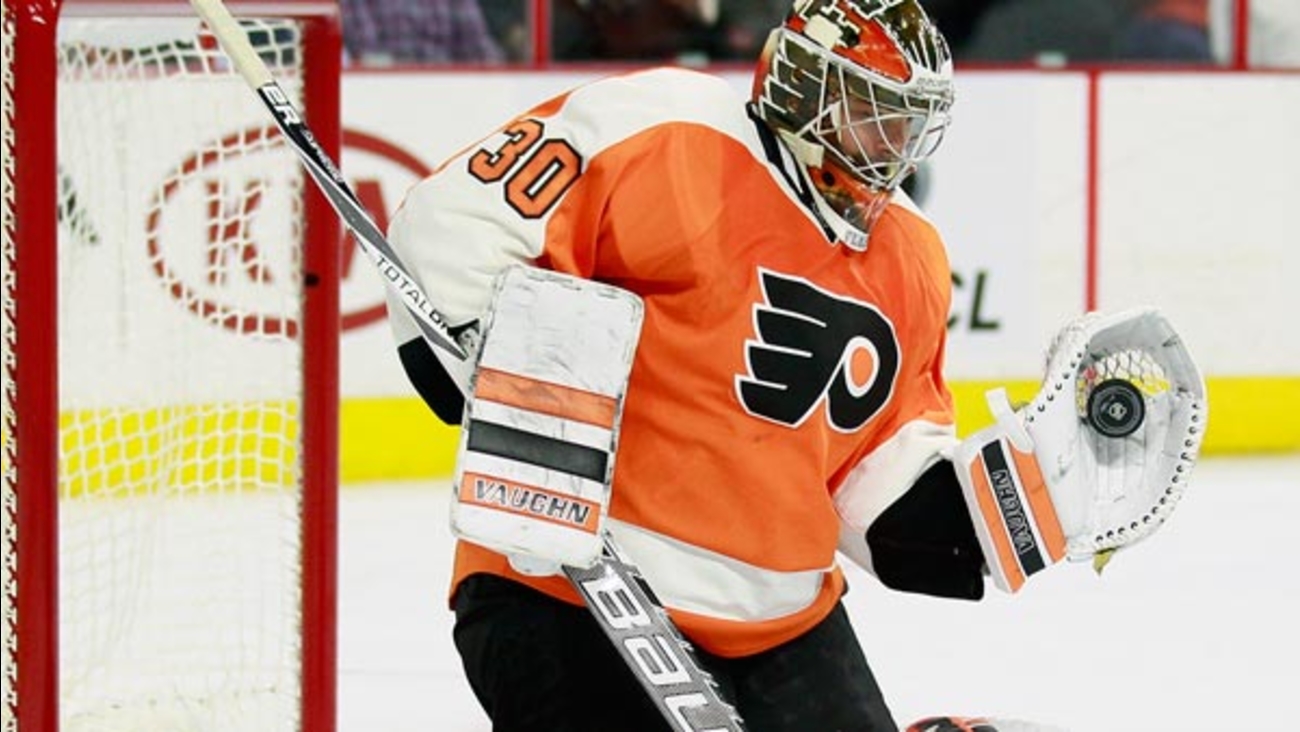 Philadelphia Flyers' Michal Neuvirth gloves a shot on goal during the first period of an NHL hockey game against the Florida Panthers, Monday, Oct. 12, 2015, in Philadelphia. (AP Photo/Tom Mihalek)

PHILADELPHIA -- Michael Neuvirth stopped 31 shots for his first shutout in more than 3 1/2 years, leading the Philadelphia Flyers to a 1-0 victory over the Florida Panthers on Monday night.

Brayden Schenn scored to help the Flyers win for the first time in three games this season.

Neuvirth replaced Steve Mason after Florida scored four goals in a 7-1 victory Saturday night. Mason left the team Monday because of unspecified personal reasons, giving Neuvirth the chance to shut down the Panthers from the opening faceoff.

Philadelphia coach Dave Hakstol won for the first time in the NHL game after spending 11 seasons coaching North Dakota. The college-to-pros move in the NHL is a rare one. Hakstol was the first to make the jump since Bob Johnson went from Wisconsin to the Calgary Flames in 1982.

With the Flyers again struggling in the first week of the season, Hakstol had to wait longer than he wanted for his first victory. The Flyers were 0-2 and held a players-only meeting following the blowout loss Saturday night.

Laviolette landed as the head coach in Nashville, and Berube was back Monday in Philadelphia watching from the press box as a scout for Hockey Canada.

The Flyers were a wreck Saturday. The Panthers scored four goals on eight shots against Mason in the first 6:46 of the game, a modern NHL record for the fastest four goals to start a season, according to Elias Sports Bureau.

Neuvirth replaced Mason after the fourth goal and made 19 saves.

He stopped 10 shots in the first period and seven more in the second, then held off the Panthers for good in the third.

Schenn gave him all the offense he needed when he knocked in a rebound 5:57 into the game for his second goal of the season.

"I'll take those goals all the time," he said.

Looking for backup help after letting Ray Emery go, the Flyers signed Neuvirth to a $3.25 million, two-year contract in the offseason after he shared time last season with Buffalo and the New York Islanders. He could be in the lineup again Wednesday against Chicago. There was no immediate timetable on Mason's return and general manager Ron Hextall asked for privacy on a "sensitive issue."

"It's sad news but you've got business to do," Neuvirth said.

Notes: Flyers C Sam Gagner made his season debut after he was a healthy scratch in the first two games. ... Flyers chairman Ed Snider missed the game because the team said he was "resting and recharging after recent medical therapy." The Flyers said Snider's involvement in team and company operations is unaffected. ... Florida hasn't won its first two games since the 2005-06 season.