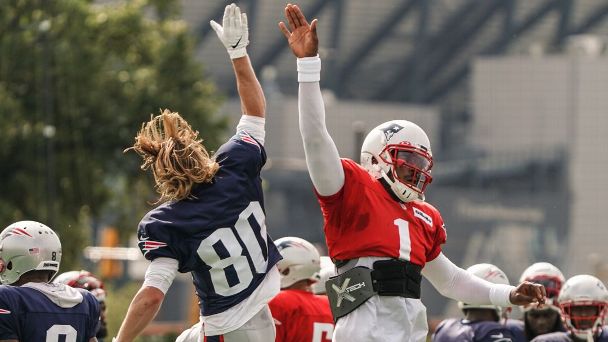 Week 2 of the NFL preseason continues with four games on Friday night, but Tuesday was the day when teams had to cut down their 90-man rosters to 85 players. That meant the end of Tim Tebow's time in Jacksonville, and there were also a couple of back-of-the-roster trades that allowed organizations to get a look at other players. Teams have to get down to 80 players by next Tuesday.

Tuesday also brought a contract extension for a player who refused to practice with his team during camp, an update on Deshaun Watson's status and an injury scare at Ravens practice.


Here's what you need to know from training camps across the league:

Seahawks, S Jamal Adams agree to 4-year extension
TheSeattle Seahawkshave agreed to a four-year extension withJamal Adamsthat will make him the NFL's highest-paid safety. The deal for the 25-year-old Adams has a maximum value of $72 million, a source told ESPN's Adam Schefter on Tuesday, and includes a $20 million signing bonus.

Texans QB Deshaun Watson, again not practicing, 'does what we ask,' coach says

Deshaun Watsondidn't practice again Tuesday, butTexanscoach David Culley said the quarterback isn't injured. "Deshaun is here," Culley said. "Again, every day he's here, he comes in, and he works. He does what we ask him to do and he's here every day and he's doing fine."

Buffalo Billsoffensive linemanDion Dawkinssaid he was hospitalized for four days while dealing with the COVID-19 virus.

The team's starting left tackle was placed on the reserve/COVID-19 list before its first training camp practice on July 28 and was activated on Thursday. It was a harrowing stretch for Dawkins, 27, who called it "one of the lowest points that I've ever been."

A day after Josh Jackson fell further down the depth chart at cornerback, the Packers found a trading partner and sent him to the Giants for fellow cornerback Isaac Yiadom. It's a swap of cornerbacks taken 54 picks apart in the 2018 draft. Jackson (second round, No. 45 overall) could never find a consistent role in the Packers' defense either under Mike Pettine or current coordinator Joe Barry, who moved the undrafted Kabion Ento ahead of Jackson in practice Monday, meaning Jackson had fallen to No. 5 at best on the CB depth chart. Yiadom (third round, No. 99 overall with Denver) is now on his third NFL team. Perhaps a change of scenery will help both. -- Rob Demovsky

Raiders tight end Darren Waller practiced for the first time in two weeks on Tuesday after suffering a reported ankle injury. "Now that will bring a smile to my face," coach Jon Gruden said. "He was great today. He makes his presence felt right away, after the catch down the field. He's a phenomenal talent." Others that returned from injury included safety Karl Joseph, cornerback Isaiah Johnson, rookie linebacker Divine Deablo and backup quarterback Marcus Mariota. All in time for a pair of joint practices at the Rams on Wednesday and Thursday. -- Paul Gutierrez

Steelers wide receiver Chase Claypool went down hard after attempting to make a deep sideline catch in the final minutes of Tuesday's practice. It came on a day that coach Mike Tomlin said was designed to simulate a regular-season Wednesday practice. Claypool appeared to suffer a lower body injury in the landing. He was helped off the field by QBBen Roethlisberger and TEEric Ebron, putting arms around each as he gingerly walked off the field. Tomlin said after practice that Claypool was being evaluated. A source told ESPN's Jeremy Fowler that the injury is considered to be minor. -- Brooke Pryor

Jacksonville's starting center,Brandon Linder, is dealing with patella tendinitis, and coach Urban Meyer said Linder is not going to practice for a while. Linder has played a full season just once since the Jaguars took him in the third round of the 2014 draft. He played in only nine games last season because of an ankle injury. The Jaguars play at New Orleans on Monday night, and starters aren't expected to play much, if at all, in the preseason finale, so Linder could be out until the Sept. 12 season opener. -- Michael DiRocco

The Ravens had an injury scare when Pro Bowl cornerback Marlon Humphrey limped off the field about an hour into practice. Humphrey, however, is dealing with a mild strain and it's not considered serious, a source said. Baltimore will likely give Humphrey an extended rest. Anthony Averett, who will likely fill in for Humphrey on the first team, has impressed the coaching staff. Defensive coordinator Don "Wink" Martindale told the team Monday night that Averett is the Ravens' third-best corner. "I think the kid has All-Pro talent," Martindale said. -- Jamison Hensley

After their offseason rebuild, the Chiefs will soon face some interesting roster decisions on the offensive line, where they have eight strong candidates who weren't with the team last season to go along with three who were. "We've got a lot of depth, particularly at those inside center-guard positions,'' line coach Andy Heck said. "We've got a lot of guys that belong in this league.'' Complicating matters is that two roster candidates, Kyle Long and Laurent Duvernay-Tardif, missed either all or most of camp with injuries but could be ready to play early in the regular season. -- Adam Teicher

Patriots quarterbacks Cam Newton and Mac Jones played smart football Tuesday in a short practice with the Philadelphia Eagles, with the work primarily in the red zone. Both took what was available to them -- often focusing on shorter passes -- and had high completion percentages as a result of it. When Jones threw a TD pass on a flare out to tight end Devin Asiasi, he was fired up and leaped into the air with Newton. -- Mike Reiss

Don't look now, but Bengals quarterback Joe Burrow is starting to find his groove. Burrow had two solid deep(ish) throws -- a crossing route to wide receiver Mike Thomas and a gorgeous ball down the middle to tight endC.J. Uzomah as Burrow was rolling right. -- Ben Baby

Safety Malik Hooker took part in his first practice of camp Monday after progressing through the team's rehab plan as he comes back from an Achilles injury. He reported no soreness Tuesday, a day after his first work on turf since getting hurt. He had an interception on a deflected pass during team drills."First one. I had told one of the guys when I first got out to this, 'Shoot, when you've not seen the ball in that long and it ain't touching you, it always finds its way back home,'" Hooker said. He hopes to play Saturday against Houston. -- Todd Archer

Tuesday was a light practice for the Panthers as they rested up for two joint sessions with the Ravens on Wednesday and Thursday. Coach Matt Rhule did reveal, however, that if the season started today,Cameron Erving would start at left tackle and Taylor Moton at right. Only if Erving can't play as happened earlier in camp due to a shoulder injury would Moton move over to the left side. That's another reason the Panthers traded Greg Little to Miami on Tuesday. It was determined Moton is the second-best left tackle. The Panthers like Trent Scott and rookie Brady Christensen on the right side behind Moton. As for the line overall, Rhule pulled on local knowledge. "We're like I-85 (under construction)," he said. "We've got some work to do." -- David Newton 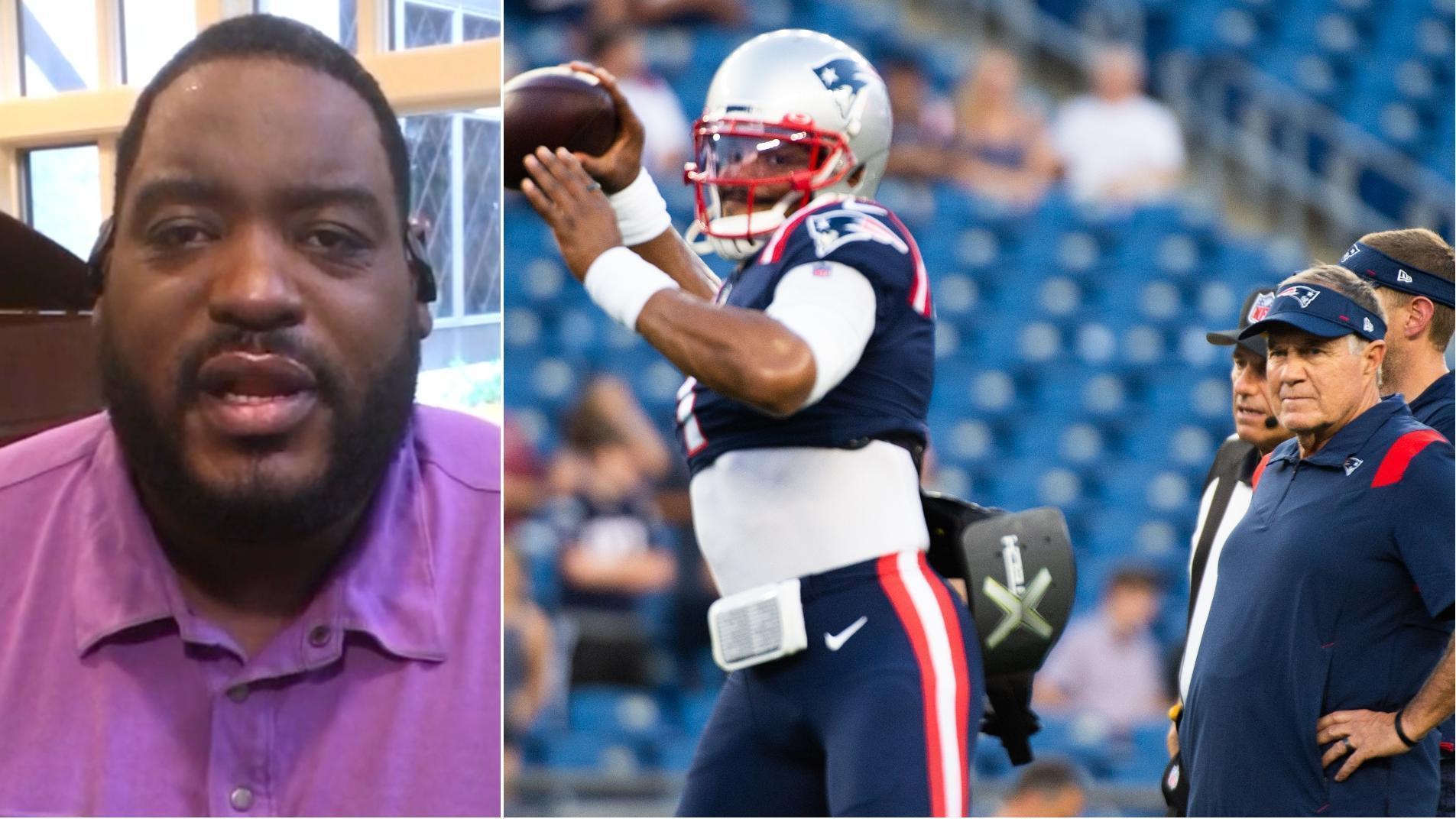 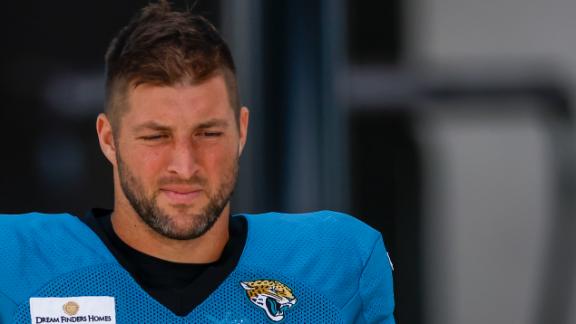 Tim Tebow released by Jaguars
Sam Acho and Dan Graziano react to the the news that the Jaguars are releasing Tim Tebow. 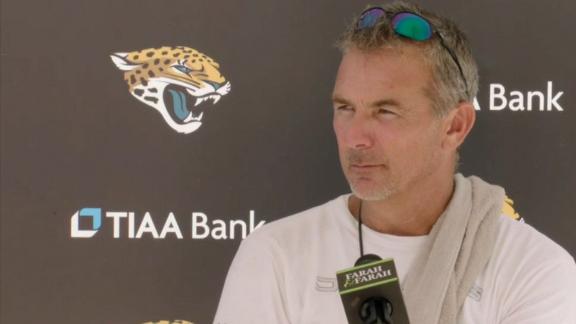