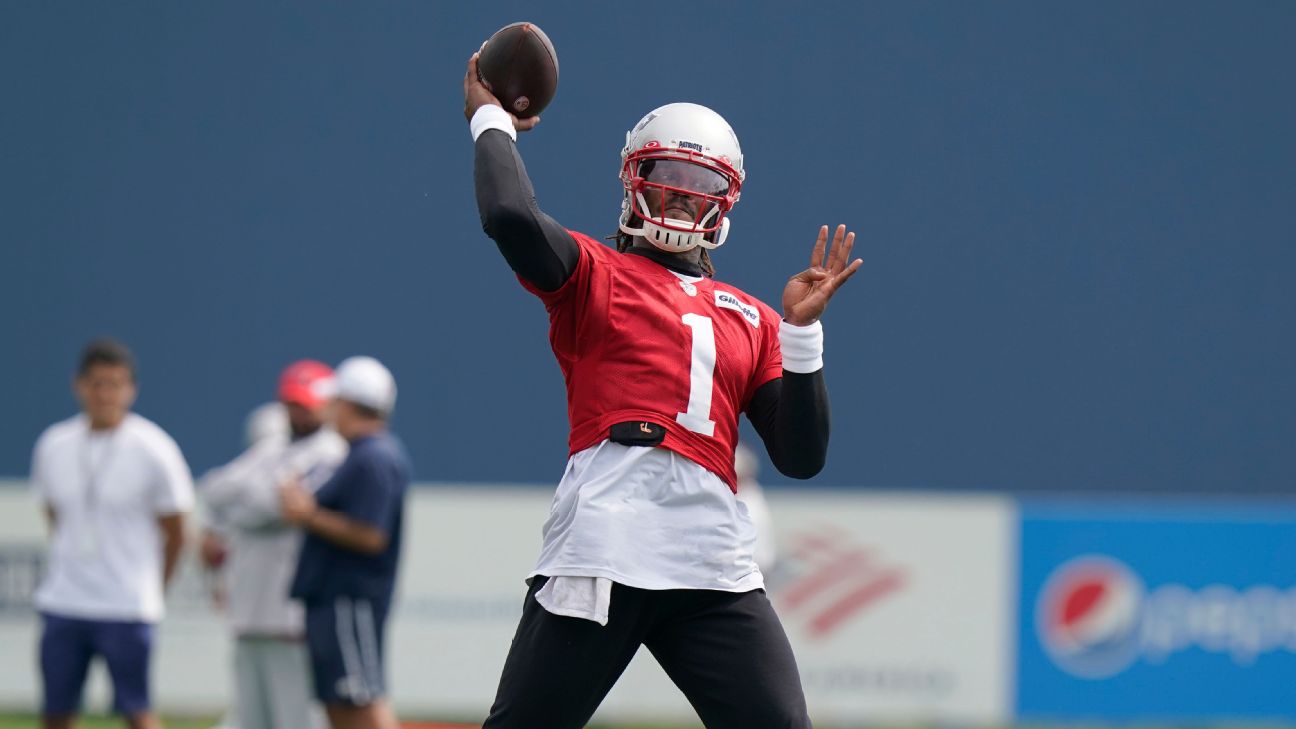 Thursday's 2021 NFL training camp practices kicked off with plenty of deep-ball passing, rookies showing off their talents and quarterback competitions heating up.

Can veteran quarterbacks Cam Newton of the Patriots and Andy Dalton of the Bears hold off first-year QBs Mac Jones and Justin Fields, respectively? Who will emerge from the Saints' battle of Jameis Winston and Taysom Hill? Can Teddy Bridgewater beat out Drew Lock for Denver's starting gig? It's much too early to tell -- we're only a few days into training camp -- but we are getting our first glimpses of the head-to-head competitions.


And while it might not even be August yet, we've already seen offenses working on stretching out the defenses. Numerous highlight-reel deep balls came out of practices today, including one from the Eagles' Jalen Hurts to rookie wideout DeVonta Smith. Smith wasn't the only rookie to make big-time plays Thursday, either.

Here's what you need to know and see from camps across the league:

It took longer than expected, but the New York Jets and quarterback Zach Wilson agreed to terms Thursday on his rookie contract. The first-round pick and presumptive starter, who missed two days of practice as the two sides haggled over technicalities in the contract language, will sign a four-year, $35.15 million contract -- a slotted deal that is fully guaranteed. It includes a $22.9 million signing bonus and a fifth-year team option, standard for all first-round picks.

Baltimore Ravens cornerback Jimmy Smith said he suffers from post-traumatic stress disorder since his family was robbed at gunpoint in February. "Going into the store and being around anyone with a mask or hood on, it really makes my heart thump to this day," Smith said after Thursday's practice. "It was a terrifying situation."

Falcons receiver Calvin Ridley was on the field doing a large majority of work during the first day of Atlanta's training camp Thursday -- which was a question since he had offseason surgery and did not participate in on-field work during the team's minicamp last month. He looked smooth running in and out of routes and a lot like the player who is expected to take over for Julio Jones as the team's No. 1 receiver. He didn't do everything Thursday, as Falcons coach Arthur Smith said, "we'll bring him along." -- Michael Rothstein

While the rest of his Giants teammates practiced, star running back Saquon Barkley worked out with trainers. He was running routes, cutting, catching passes and sprinting. Full-speed sprints! Barkley looked good, albeit from quite a long distance. Still, this was the first time since tearing up his right knee that he has been out in public doing these types of things. It's at least a good sign, despite his starting the summer on the PUP list. Maybe getting into a practice is only a few weeks away? -- Jordan Raanan

Running backRashaad Penny delivered one of the highlights of the Seahawks' second practice at training camp when he took a handoff and burst into the second level before accelerating past the rest of the defense. Chris Carson ripped off a long run of his own right after that. The Seahawks are hoping to have that type of one-two punch in their backfield this season, something they've enjoyed in only brief spurts over Penny's three injury-plagued seasons. Carson is their unquestioned starter, but coach Pete Carroll said this is the best Penny has looked since Seattle drafted him 27th overall in 2018. -- Brady Henderson

New Rams quarterback Matthew Stafford is making a fast impression on his new teammates. After Day 2 of training camp, fifth-year receiver Cooper Kupp went so far as to call one of Stafford's throws "disgusting" -- and that's a compliment. "For him to no-look this pass down the field [to Robert Woods]," Kupp explained, "it was a pretty unbelievable play." For a second consecutive practice, Stafford connected on an impressive deep throw down the sideline to receiver DeSean Jackson to start off team action, then later avoided pressure in the pocket to hit Kupp over the middle. Cornerback Jalen Ramsey said, "We may have really good coverage, and he'll throw a receiver open." -- Lindsey Thiry

Bengals quarterback Joe Burrow and wide receiver Ja'Marr Chase couldn't get the deep ball right in Thursday's practice. On one rep, Chase had cornerback Chidobe Awuzie beat, but the ball was underthrown. That gave Awuzie enough time to break up the pass. On another throw, Chase was open on a post route. Burrow delivered a good ball, but Chase couldn't reel it in. -- Ben Baby

Coach Kliff Kingsbury said five Cards were out because of the COVID-19 protocol, including three starting offensive linemen: center Rodney Hudson, left guard Justin Pughand right tackle Kelvin Beachum, plus receivers Andy Isabella and KeeSean Johnson. Besides Hudson's projected return of Aug. 2, Kingsbury didn't have a timeline for when they'd be back. Kingsbury said it's a "plus" for guys to test positive at this point in training camp because they don't have to get tested again for three months. -- Josh Weinfuss

Taysom Hill got the first turn of training camp as New Orleans' starting quarterback during Thursday's practice. However, Jameis Winston generated more buzz with an efficient day that included a deep completion to receiver Deonte Harris and a variety of short and intermediate throws. He showed more rhythm, timing and patience than he did in a small sample size last summer. -- Mike Triplett

The Chiefs' Chris Jones had what would have been a sack of Patrick Mahomes had Thursday's practice been a full-contact workout, and it happened from his new position at defensive end. "I feel good rushing off the edge,'' said Jones, who led the Chiefs in sacks in each of the past three seasons playing mostly from an interior position. Jones said he spent more offseason time doing yoga and Pilates, which help with his flexibility. "[Coming] from the edge, it's a little different from taking the turn from [the interior]," he said. -- Adam Teicher

Niners defensive end Nick Bosa isn't participating in team or one-on-one pass-rush drills yet, but his return to the field in any capacity is a significant development. The plan for now is to ease Bosa back in. He missed all but five quarters last season after an ACL injury in Week 2, but he's on track to play Week 1 against Detroit and is already participating in individual work.-- Nick Wagoner

Cam Newton continues to take top QB reps for the Patriots, followed by Mac Jones. In full-speed 11-on-11 or 7-on-7 drills, Newton was 9-of-14 and Jones 7-of-13. Newton capped off his practice with a double exclamation mark -- back-to-back TD passes to tight end Hunter Henry. -- Mike Reiss

Rookie QB Trevor Lawrence had only three incompletions in 7-on-7 and 11-on-11 work, and one was a drop. He worked with mainly the first team on Thursday after working mainly with the backups on Wednesday, and he connected with Laviska Shenault Jr. and Marvin Jones Jr. (for a TD) on deep passes. -- Michael DiRocco

The Bears' Andy Dalton practiced like a quarterback entering Year 11. Justin Fields, at times, resembled every NFL rookie quarterback on the second day of training camp. Dalton's throws were largely on the money, including a deep ball to Marquise Goodwin on the first snap of 7-on-7. Fields had a good number of sharp completions, but the first-round pick also struggled in the accuracy department during certain portions of the workout. Chicago's No. 3 quarterback, Nick Foles, predictably experienced a high degree of success against the Bears' third-team defense. -- Jeff Dickerson

Jeremy Chinn showed on the first play of 7-on-7 drills why the Panthers are high on him making the transition from outside linebacker to safety, picking off a Sam Darnold pass. Coach Matt Rhule said, "I think right now we feel good about the plan of trying him back there, letting him affect our pass defense a little more, and then we can move him up by call or by game plan." -- David Newton

Starting center Ryan Kelly left practice early Thursday after suffering an elbow injury during 11-on-11 drills. Kelly immediately grabbed his left elbow and then spent the rest of practice watching with it heavily wrapped. Second-year player Danny Pinter replaced Kelly. The Colts are already missing starting left tackle Eric Fisher, who is still out while recovering from a torn Achilles. -- Mike Wells

Quarterbacks Drew Lock and Teddy Bridgewater will be subjected to the daily scrutiny, but the first two days of camp showed the Broncos' first-team defense could have a big say in who does win the job. Lock drew the first-team D in a red zone period Thursday, for example, and was shut out. Later in practice, in some additional red zone work against a different group, he threw three scoring passes. So while Bridgewater has been more consistent overall in the early going -- two incompletions in two days combined in full 11-on-11 work -- ultimately the quarterback who solves the Broncos' own defense, as well as the preseason opponents, the best will likely win the job. -- Jeff Legwold

Backup quarterback Tyler Huntley delivered the biggest highlight of the Ravens' second day of training camp, uncorking a 70-yard touchdown pass to Jaylon Moore, who was double-covered at the time. With Lamar Jackson sidelined with COVID-19, Baltimore has remained aggressive on offense. The Ravens have talked about wanting to go deep more this season, and they're backing it up with several downfield throws early in camp. -- Jamison Hensley

A wide receiver wearing a No. 84 jersey drew loud cheers from the fans at Heinz Field on Thursday. But it wasn't Antonio Brown making the impressive catches during the Steelers' second open training camp practice. Instead, it was rookie Rico Bussey. During an 11-on-11 passing drill, Bussey juggled a deep pass from Dwayne Haskins Jr. on the sideline and brought it down over Justin Layne. A few plays later, he made a diving catch on a Josh Dobbs pass, laying out to grab it over Stephen Denmark on the other boundary. He put a bow on his practice by hauling in a wide-open touchdown from Haskins to end the two-minute drill. -- Brooke Pryor

Washington hopes rookie receiver Dyami Brownwill develop into a big-play threat, as he has been in two days of practice. On Thursday, he beat fellow rookie corner Benjamin St-Juste on a deep out-and-up and created much separation before making an over-the-shoulder grab of a slightly underthrown ball. Brown's speed was been evident, but he has also done a nice job running slants -- a route the team likes for him because it considers him fearless. -- John Keim

Raiders edge rusher Maxx Crosby was having his way with first-round draft pick Alex Leatherwood in individual pass-rush drills Thursday, and he pulled the No. 17 overall pick off to the side to offer support and advice on how the right tackle might handle the myriad of rushes with which Crosby was beating him. -- Paul Gutierrez

Dak Prescott might not have practiced because of his latissimus injury, but that doesn't mean he sat idle Thursday. The Dallas QB went through all of the footwork drills in the individual period of practice, worked on handoffs to the running backs and then went through a prolonged series of resistance training.-- Todd Archer

The revamped Titans secondary has gotten a lot of attention during the offseason. Breon Borders is a holdover from last year who started five games, and he has had a solid start to camp. He had a big pass breakup in one-on-ones with Racey McMath and a couple of them during 7-on-7 and team periods as well. -- Turron Davenport

NFL quotes of the day

Best of the rest from around the league 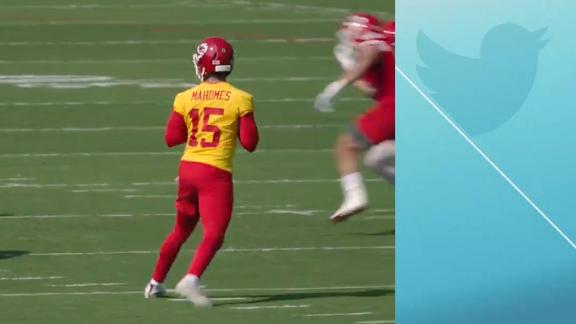 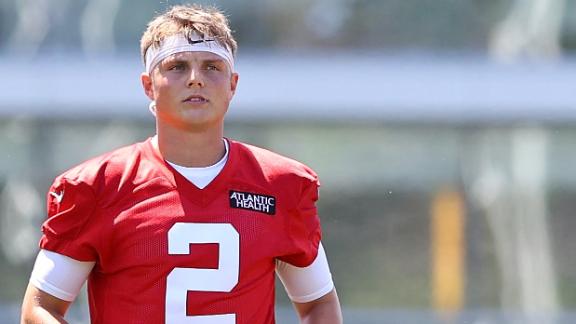