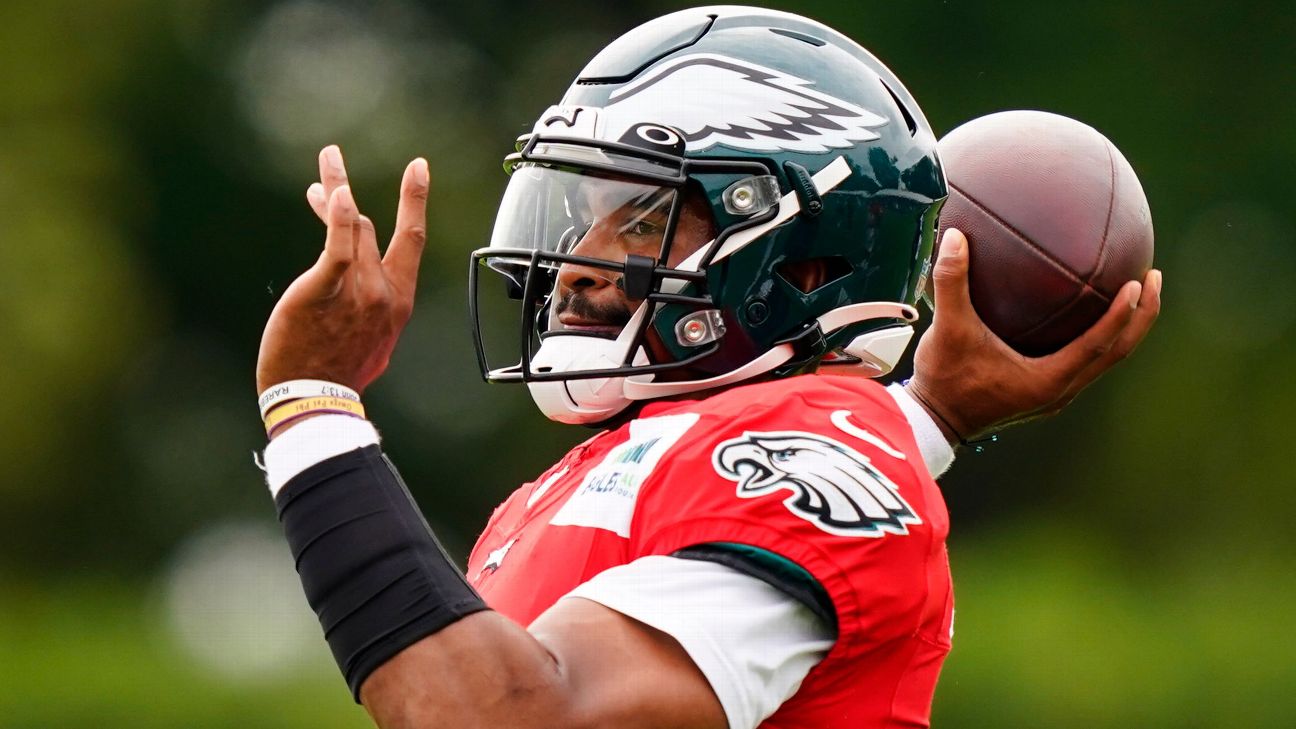 As NFL teams prep for more 2021 preseason games, quarterbacks again took the spotlight at training camp practices -- on and off the field -- on Monday.

The Eagles' Jalen Hurts put on an impressive performance against Cam Newton and the Patriots, the Chiefs'Patrick Mahomes is readying for more preseason game snaps with his revamped offensive line -- and he released a new shoe -- and Lamar Jacksonthrew his first picks at Ravens camp.


In other news, Jacksonville experienced a wardrobe malfunction, Ryan Fitzpatrick continues to put distance between himself and the Washington backups, andJalen Mayfieldcontinued his tour of the Falcons' offensive line.

Here's what you need to know and see from camps across the league:

After returning to the field for a week, Houston Texans quarterback Deshaun Watson did not practice on Monday afternoon.

Watson, who reported to camp on July 25 after requesting a trade in January, practiced for the first five days of training camp, was not on the field for the next five days and then returned for all four days of the third week of practice.

MRI clean on Jordan Love's shoulder, but he could be sidelined

Patrick Mahomes played just four snaps in the preseason opener against the San Francisco 49ers, but Andy Reid suggested he would get a bigger workload on Friday night against the Cardinals. "Getting used to those new [offensive linemen] he's dealing with I think is important, them hearing his voice in a game situation with fans," Reid said. Mahomes indicated he was eager to get more snaps. "I think it's especially important this year, coming with the new offensive line, a lot of new guys out there,'' he said. "To kind of get in and out of the huddle ... and having that communication because on game day, it's different than at practice. So it's good to get those reps in." -- Adam Teicher

Lamar Jackson threw his first interceptions of training camp, getting picked off both times by safety Chuck Clark. Jackson was first intercepted when he tried to force a pass in the middle of the field and later got picked off on a deflected throw in the end zone. Other than those turnovers, Jackson threw the ball well and remains sharp since missing the first 10 days of camp after testing positive for COVID-19. -- Jamison Hensley

Jalen Hurts appeared to have the best day of all the quarterbacks during Monday's joint practice between the Eagles and Patriots, including Cam Newton, whom Hurts referred to as "a legendary player." Aside from one 7-on-7 series where Hurts threw a pair of interceptions, he was in command, accurate and on time with his throws. One pass that stood out: a teardrop down the left sideline that floated over New England corner J.C. Jackson and onto the fingertips of Jalen Reagor, who hauled it in after a quick bobble for a big gain. -- Tim McManus

Rookie offensive lineman Jalen Mayfield worked primarily at left guard Monday after spending the majority of training camp at right tackle. Atlanta had considered him as a possibility at guard since drafting him, and the combination ofKaleb McGary's return and the elevation of Willie Beavers, along with the potential need for competition for Josh Andrews at left guard, gave Atlanta the reasoning to do it. Mayfield primarily worked with the second team Monday but figures left guard is where he's going to get a long look between now and the regular season. -- Michael Rothstein

There apparently was some type of miscommunication regarding whether or not the Jaguars were practicing in full pads on Monday. Multiple offensive and defensive linemen showed up without leg pads, including defensive end K'Lavon Chaisson and left tackle Cam Robinson. Equipment staff brought out pants and pads and the players were forced to change on the field. Robinson, who is playing on the franchise tag and is guaranteed $13.754 million this season, refused to put the pants and pads on, however, and still participated in the rest of practice. -- Mike DiRocco

Quarterback Ryan Fitzpatrick continues to separate himself from backup Taylor Heinicke and the others during workouts. On Monday, he stood out in a two-minute situation, throwing in rhythm and with anticipation and culminating one drive with a touchdown to tight end Logan Thomas off a rub route near the goal line. Fitzpatrick is throwing on time and that's what has the coaches pleased. It probably helps facing the same defense now for weeks; it becomes easy to adjust. But Fitzpatrick also talks often with the receivers, even after completions, about what they should do on the same play with a different look from the defense. Coaches and players have harped on that knowledge since camp started and they hope it pays off during the season. -- John Keim

Running back D'Andre Swift was held out Monday as he continues to nurse a groin injury, but coach Dan Campbell is hoping to have him ready for Tuesday's practice session on a limited basis. Swift has been limited mostly throughout camp and didn't participate in Friday's preseason opener against the Buffalo Bills, which gave Jamaal Williams more reps with the starting unit. Campbell says the Lions are being conservative with Swift and chose to sit him against Buffalo although he could've gone if they really needed him. "Hopefully he's feeling better tomorrow and we can begin to progress him with practice," Campbell said of Swift. He is expected to be the starter when the season hits.-- Eric Woodyard 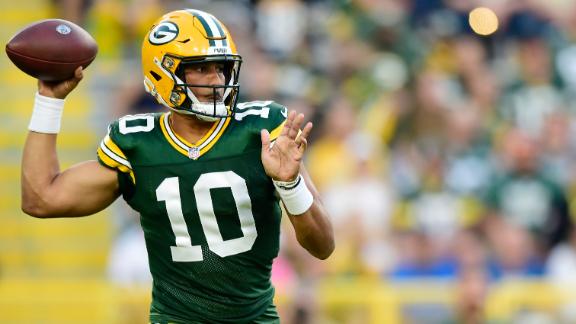