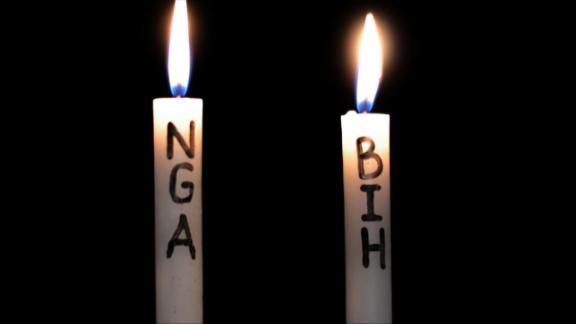 Our expert bloggers will give their thoughts ahead of each game, so as Nigeria take on Bosnia-Herzegovina in Group F, Colin Udoh (Nigeria) and Sasa Ibrulj (Bosnia) are your guides.

Colin Udoh: Before the tournament even kicked off, both sides knew THIS was the game they had to win. If ever there was a winner-take-all in group play, this is it. Bosnia have already lost to Argentina, and Nigeria are largely expected to do the same. Just the way Bosnia are expected to beat Iran, who Nigeria failed to beat. Anything other than a win for the Super Eagles and they can all but kiss their chances of progress goodbye. These two sides have never met before, but Bosnia will take comfort from Nigeria head coach Stephen Keshi's abysmal record against non-African teams.

Sasa Ibrulj: Logic says not much -- this is the first time Bosnia-Herzegovina will have ever played Nigeria, so the expectations should not be too big. But, a solid performance in 2-1 loss to Lionel Messi's Argentina in the opening match was a boost for Bosnian self-confidence, and they are now openly aiming for the knockout stages. This match is crucial because the Bosnians are the only team with zero points in the group, and a loss would send them home. Any other outcome would leave them chances to decide their own destiny in the last match against Iran. However, Bosnia-Herzegovina head coach Safet Susic is not a man to play for a draw -- he'll come out to win this match and move the Bosnians a step closer to a historic outcome.

CU: Osaze Odemwingie came on against Iran and was easily one of the better players for Nigeria on the night. His speed may be going a little bit, but he still has a quickness of thought that is sharper than most on his side. Not to mention that he is two-footed and can play from almost everywhere. Keshi is mulling the idea of starting him, possibly over Ramon Azeez. Most back home believe it would be the best move for Nigeria. Odemwingie could just be the creative spark Nigeria so desperately missed against Iran.

SI: Edin Dzeko was having a hard time dealing with Argentine defense, constantly battling two or even three defenders on his back. He failed to score in the past two matches and his goal tally on the national team is stuck on 32. Dzeko will be fully motivated to strengthen his role as national team hero, and a score in this match would definitely be that. Of course, Dzeko will need better support from the midfield; Susic has to to find a way to reduce the gap between him and the rest of the team, but Dzeko is the No. 1 player of this team, and in matches like this one, expect him to shine.

CU: The obvious choice may not be the only choice, but it has to be the first choice. Edin Dzeko is as dangerous as they come. There is nothing fluky about 66 goals in 111 appearances for Wolfsburg, or 46 in 108 for Manchester City. His international strike rate is even more impressive: 35 goals in 62 games. His 10 goals in helping Bosnia reach the World Cup in Brazil is more by some way than any Nigerian striker managed. And it is not just about his goals. Dzeko is an inspirational figure for Bosnia, and is known back in his home country as the Bosnian Diamond. His sheen will certainly need to be dimmed by the Super Eagles.

SI: Victor Moses. He was not impressive against Iran and -- similar to Dzeko -- he'll have something to prove. His heat map from that match says that he moves toward the center and deep quite often, dragging the opposite defense out. This could be a potential problem for slow Bosnia, especially if Susic decides to play Sejad Salihovic at left back. The space opens there and Moses, together with Emmanuel Emenike and Ahmed Musa, could easily exploit this.

CU: Kenneth Omeruo is a strapping young defender who is coming on in leaps and bounds. He has faced and stood up to some world-class attacking talent and come off smelling of roses. A cool and confident, ballplaying center back, Omeruo will need all of his wits and concentration about him when he goes up against Dzeko. The striker's record is intimidating at club level as it is frightening at international level. But Omeruo is not one to fear an opposition striker, and it will be tasty to see the clash between the experienced sharpshooter and the young upstart looking to keep him quiet.

SI: I expect Nigeria to play totally different than in the first match -- this time they could be the one to sit back and wait to break on Bosnia-Herzegovina. In such a setup, where Bosnia is supposed to have more possession, the key could be the transition from attack to defense, and here is where the Dragons have to find a solution for John Obi Mikel and his ability to play out to the rest of the team. On the other hand, it will be the same with Miralem Pjanic, so the matchup between these two players will be interesting to see.

CU: It's win or bust, and this is a game Nigeria desperately needs. If they play as a team, they can beat anyone. Nigeria wins 2-1.