Pelton mailbag: What could 76ers get by trading down in the draft? 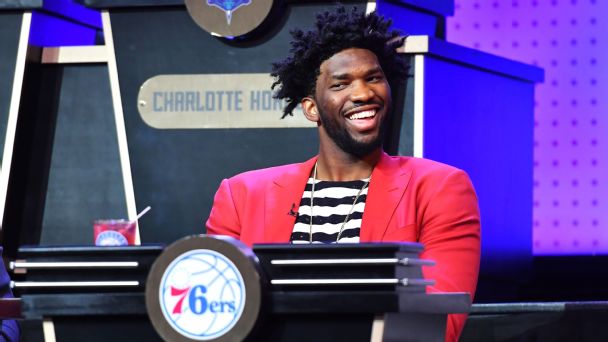 "If you had to make up teams of one & dones and players that stayed in college for 2-plus years, who do you think would win?"

A few things become obvious doing this exercise. The first is that the players with multiple years of experience would dominate. Here's my stab at 15-player rosters:

Of the five players I picked for MVP, four of them are on the team with two-plus years of experience, and LeBron James isn't eligible at all. (Sadly, the preps-to-pros team is running short on the talent necessary to compete with these teams.) There will probably be three or four one-and-done players on the All-NBA teams this season, as compared to something like eight off the team with two-plus years of experience.

So why is that? To some extent, it's a math problem. There are something on the order of three times as many players who spent at least two years in college in the NBA at any given time than one-and-dones, so there are more opportunities for players like Butler and Millsap to unexpectedly develop into stars. And lest we go too far into the value of college experience, the fact is a good percentage of the stars were there precisely two years, so they weren't exactly getting a full NCAA career. Still, it's a good reminder not to dismiss the upside of older players in the draft.

The other fascinating thing is the imbalance of these two rosters. I had to stretch to find a second true center for the experienced team, while Myles Turner and Hassan Whiteside couldn't even crack the one-and-done roster. Because height is so much easier to identify than skill, it's clear that quality big men tend to leave college earlier unless -- like both Green and Millsap -- they're undersized. Wings, in particular, tend to emerge on the NBA's radar much later.

@kpelton #peltonmailbag What would you ask of Suns/Kings/Magic/Wolves respectively if you were Sixers Gm to trade down from no3 to no4-7?

-- Eddie Gustavo (@haralapop) May 18, 2017
So my assumption, fair or not, is if the Philadelphia 76ers trade down, it's probably to take Kentucky guard Malik Monk -- a better fit for their needs than De'Aaron Fox, Josh Jackson or Jayson Tatum. That being the case, you probably wouldn't want to go any lower than No. 6 because the Orlando Magic are the most legitimate threat of that group to take Monk. (With young shooting guards, the Phoenix Suns and Sacramento Kings are probably out of the Monk market.)

Based on my trade value chart, there's not a huge difference between the third pick and any of those selections. Going from No. 3 to No. 6, for example, is a difference approximately equivalent in value to the 39th pick. In practice, of course, teams have paid a much higher premium to move up.

So I think my target would be getting the Magic to give up No. 6 and their other first-round pick, No. 25 overall, for No. 3. That would yield 860 points of draft value in Philadelphia's favor -- enough to make this deal a win even if the Sixers had to throw in one of their four second-round picks (Nos. 36, 39, 46 and 50) as well. It could be reasonable for Orlando if the Magic are particularly enamored of Jackson, who seems unlikely to get past Phoenix if he's still on the board.

@kpelton is there any arguement for KAT as a 4 with a traditional 5 next to him? #askwos

-- Nolan Ragogna (@nolanraggy) May 15, 2017
I think there certainly is an argument that Karl-Anthony Towns belongs at the 4 for now, and it starts with last season's performance alongside Gorgui Dieng in the Minnesota Timberwolves' starting lineup. According to NBA.com/Stats, the Timberwolves outscored opponents by 1.4 points per 100 possessions and had a 109.3 defensive rating when Towns played with Dieng. When Towns played without Dieng, Minnesota was outscored by 6.4 points per 100 possessions and gave up a whopping 114.4 defensive rating.

Now, the fact that the Timberwolves' offense didn't improve much when Towns slid from power forward to center probably reflects the rest of the lineup. Per NBAwowy.com, rookie backup point guard Kris Dunn played more minutes than starter Ricky Rubio with Towns on and Dieng off. Nemanja Bjelica also hasn't proven quite stretchy enough to make a frontcourt pairing with Towns at center challenging to defend.

However, Minnesota's defensive decline does seem to point to Towns' inability to anchor a defense at this stage of his career. The Timberwolves allowed far more shots inside three feet (35.4 percent of opponents' attempts) with Towns alone on the court than when he played with Dieng (32.1 percent). Watching Towns, he doesn't yet appear to have developed feel for when to help and when to stay home. That may come, given Towns has all the physical tools. And the tradeoff may still prove worth it, if Minnesota can upgrade the options at power forward this offseason. But if the Timberwolves decide Towns is better as a power forward, that's reasonable at this point.

"In your opinion why is Mo Cheeks not in the Hall Of Fame?"

There are a handful of point guards from the 1980s and '90s who have been on the borderline of making the Naismith Memorial Hall of Fame. Cheeks and Tim Hardaway were finalists this year, while Kevin Johnson was a finalist the year before. Though he doesn't appear to be a serious Hall of Fame candidate, I'd throw Terry Porter in that mix too based on his advanced statistics.

Here's how my championships added metric compares the value provided by the four point guards in terms of regular-season performance, playoff performance and the awards they won.

Breaking it down that way shows that a lack of awards is surely what's hurting Cheeks' chances. He was a four-time All-Star but never made an All-NBA team. (Cheeks was a five-time All-Defensive selection, but I don't include that in my awards rating because there's no offensive equivalent.)

Johnson made just three All-Star teams because there was so much competition in the West but was chosen for five All-NBA teams, including the second team four times. (There was no All-NBA third team for much of Cheeks' prime, so it's not included in championships added either for fairness.) Hardaway also made five All-NBA teams and was the only player in this group chosen for the All-NBA First Team. So despite his limited playoff impact, I think Hardaway probably has the best chance of making the Hall of Fame from this group.

@kpelton Was Danny Green's 2013 NBA finals the best 7-game stretch of his career? if so, quite the time to peak. #peltonmailbag

-- Dan (@1l1dwur) May 12, 2017
Not all that close, in fact. Although naturally many of them overlap (i.e., the same games are included in multiple seven-game stretches), he has had 33 seven-game spans with a better total game score than during the 2013 NBA Finals.

That's partially because Green struggled in the San Antonio Spurs' Game 6 and Game 7 losses in Miami, combining to shoot 2-of-19 from the field. But even if we go by best five-game stretches, Green has had two separate periods (February 2013 and November 2014) with better game scores over five games than his first five of the NBA Finals, after which he was being considered for MVP of the series.