Penn State loss means We Are! in the Bottom 10 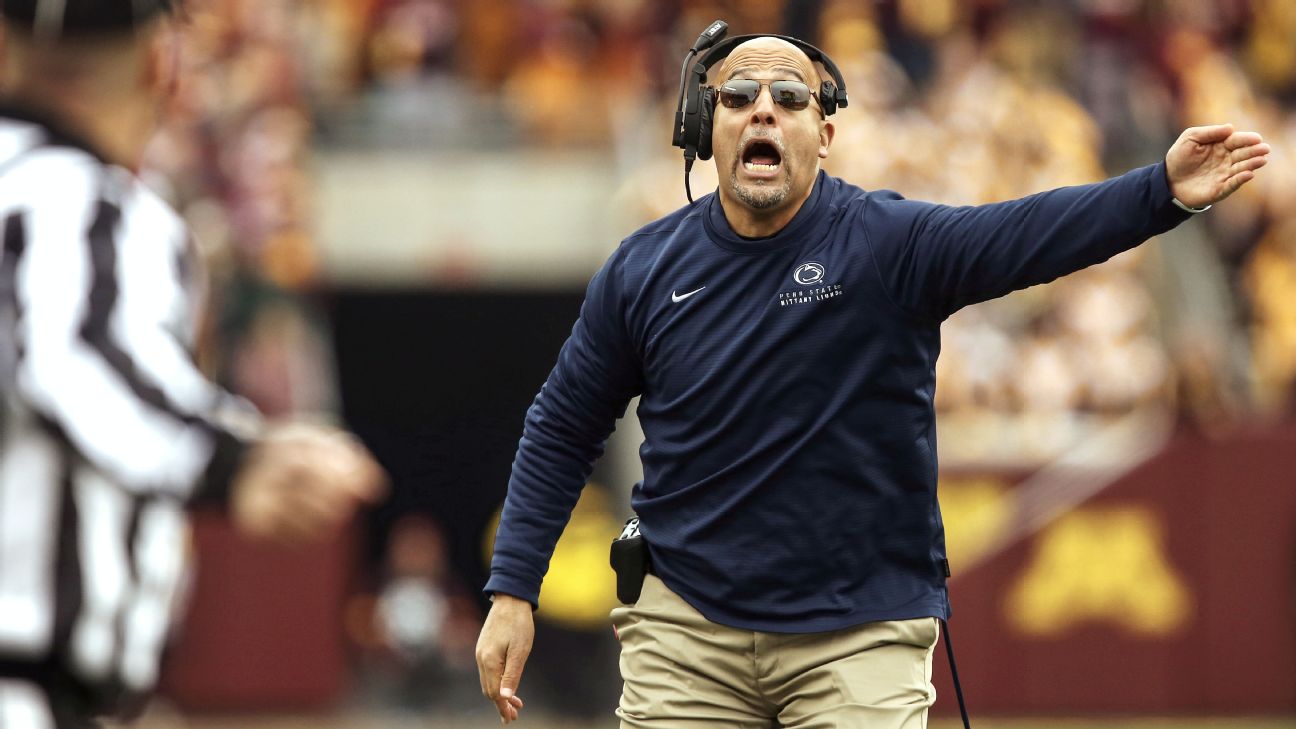 Bottom 10 inspirational thought of the week:

This whole town can slow you down

But I know exactly where I am going

And I am almost there

But I don't care

'Cause I'ma almost there

-- "Almost There" from "The Princess and the Frog"

Here at Bottom 10 headquarters, located in the basement of the Burbank backlot building where Disney+ plays old Goofy Sports football movies off of LaserDiscs, we can see the light at the end of the 2019 tunnel.

It's mid-November. A season that started with Week 0 has moved into weekends of double digits. The College Football Playoff top four is teetering on chaos. Alabama lost. Minnesota is winning. LSU can't stop scoring points. The Pac-12 has suddenly reappeared in the CFP rearview mirror.

But with all due respect to the hoity-toity top 10, their world is downright spa chime-esque compared to the bomb-siren, greased-pole universe that is the Bottom 10. Never has a season seen so many so-called Power 5 schools crash these rankings. Never has a season seen so many traditional Bottom 10 programs bum-rush toward the top spot so late in the season. Never have we designated so many games as Pillow Fights, be they of the week, year or century. And never have we used the word "never" so many times in one paragraph.

On Saturday, we even dared to crash the top 10's biggest party, LSU at Alabama. On the north end of the quad in Tuscaloosa was the expansive set of College GameDay. On the south side were the stages and crowds of SEC Nation. Precisely halfway between those two, we found an empty trash can, slapped our logo on it and declared it the site of Bottom 10 GameDayNation.

After about 10 minutes, only one person had stopped to talk ... and he asked for directions to the Porta-Johns. Just like the teams in this week's ever-tightening rankings.

With apologies to George H. Denny and Steve Harvey, here's this week's Bottom 10.

The Rubber Kings are wishing they could slap four tires on a time machine and go back to 2015. That's when they were winners of eight games and rolling to a Potato Bowl win over Utah State. That's also when their next two opponents this season -- Eastern Not Western Michigan and My Hammy of Ohio -- were the ones contending for the Bottom 10 title instead of them. On Tuesday, they fell to EMU 42-14, and next week our ESPN FPI machine gives them a 6.6% chance to win at 5-4 Miami Not Of Florida But Of Ohio. Then it's the season finale at Ohio to face the Fightin' Frank Soliches, a team Akron has beaten only once since 2007. If it all goes according to chalk, Akron will be difficult to dislodge from this spot before season's end. In related news, my dog just ate some sidewalk chalk, and that, too, has been difficult to dislodge. Also, this happened:

The team that would seemingly be in the best position to do the dislodging of Akron continues to play perhaps the most masterfully designed schedule in Bottom 10 history. The Minutemen brought muskets to a tank battle over the weekend, falling 63-7 at Army. Next they travel to Northwestern for a showdown of one-and-something teams. Why can't they unseat Akron? Because they defeated the Zips 37-29 back in Week 5. See? Best worst schedule ever.

If you've ever prepared Minute Rice, then you know that you have to keep an eye on it. It has to be pulled from the stove at just the right moment or in an instant it will go from perfectly cooked to a hot, wet mess. After a season-long simmer, it's time to keep our eyes on the Owls, who will finish the season with three contests against opponents with losing records, including the annual Bottom 10 Bowl season finale against ...

... the Miners, who are suddenly crashing into this Bottom 10 race like Indiana Jones piloting a brakeless mine cart through the Temple of Doom. After losing to Charlotte, UTEP faces another classic geographic rival in UAB. But before facing No. 3 Rice, UTEP travels to No. 6 ... wait, we're going to make you keep reading to find out who No. 6 is.

Penn State and the College Football Playoff top four are a lot like me when I visit a Christmas tree lot. No matter how much I want to be there, as soon as I get anywhere near it, I develop a violent allergic reaction and have to once again settle for an artificial tree. Or the Citrus Bowl.

The Other Aggies might want to have a word with me about that UMass "most masterfully designed schedule in Bottom 10 history" claim. This weekend, they face Incarnate Word before finishing with UTEP and the second half of their in-season home-and-home with Liberty. The real tragedy here is that they couldn't schedule a game with UMass, a fellow castaway independent. Do I smell a postseason opportunity here? No ... sorry ... that's not what I smell. My dog finally dislodged that chalk.

Speaking of smells, is there any scent better than that of a pig that has been slow-cooked and smoked for 24 hours as the "BBQ is ready, y'all!" bell rings? The good news is that the entire state of Arkansas is currently enveloped in that aroma. The bad news is that it is the Razorback, burnt to a crisp via a fire lit with the rolled-up buyout clause in Chad Morris' contract.

This week, the race for this spot was a close one between USA and the Old Dominion Monarchs. At first, South Alabama held the edge because it is the Jaguars, which are awesome cars, and the Mercury Monarch was a total stink box. But ODU holds the edge in performance against a common opponent, with a 38-14 loss to UAB vs. South Alabama's 35-3 loss to the Blazers. What sealed the deal for USA was a head-to-head comparison of each team's Week 11 loss to equally generic teams from Texas. The Jags lost by two points to Texas State, and ODU lost by one point to UTSA. Also, my wife just read that last paragraph and wants to know how the same man who can't correctly calculate a tip at dinner can write a nuanced take on South Alabama vs. Old Dominion for the No. 8 spot in the Bottom 10.

The Wildcats vs. the Minutemen is easily the season's most unexpected Pillow Fight of the Week of the Year. But we refuse to give this game an additional "of the Century," as we have for two prior 2019 UMass contests, vs. Akron and UConn. Why? Because the mystically wizardly accurate FPI cauldron gives Massachusetts only a 1.4% chance to win on Saturday in Evanston. It'll be a bear of a game. Just ask the Bear.

Speaking of UMess, after their 56-35 thumping of those border rivals, the Huskies have gotten back to their Bottom 10 ways, losing to Navy and Cincinnati by a combined score of 104-13. Imagine how much closer those games would have been if we still used rotary phones instead of smartphones and played cribbage instead of Fortnite. Amirite, Randy Edsall?! 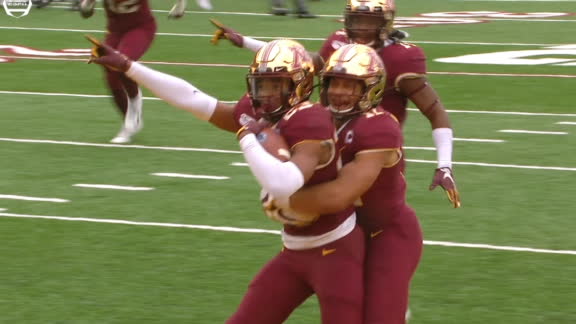 Howden's INT seals it for Minnesota
Sean Clifford's pass is intercepted in the end zone by Jordan Howden as Minnesota hangs on to take down Penn State 31-26. 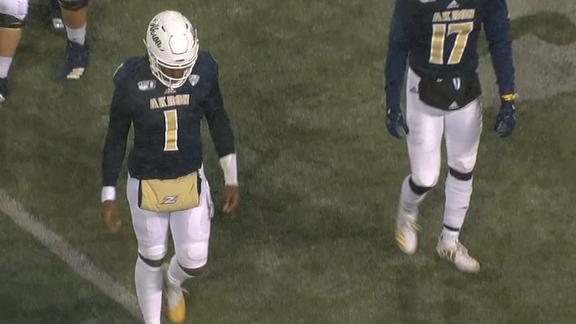