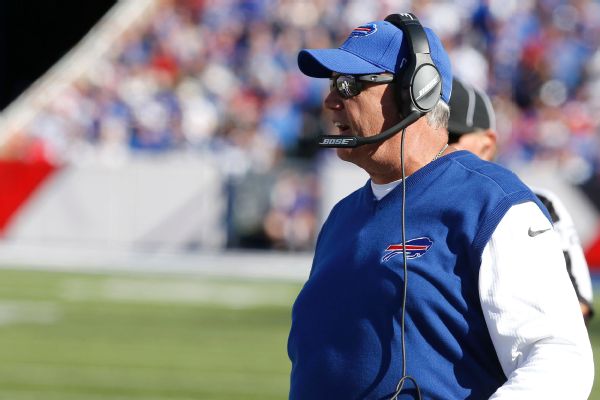 SEATTLE -- After his interception in the third quarter Monday night, Seattle Seahawks cornerback Richard Sherman stared down the Buffalo Bills' sideline and drew the ire of Bills coach Rex Ryan.

"I had some words," Ryan said afterward. "I think I said, 'You're too good of a player to act like an ass.' I think that's what I said."

During his weekly appearance on the "Brock and Salk" show on 710 ESPN Seattle, Seahawks coach Pete Carroll was asked about Ryan's comments.

"I just wish he'd coach his own team," Carroll said. "Just coach your own guys."

"As a matter of fact I do coach my own guys and I'm proud of the team that I coach," Ryan responded on a conference call on Tuesday. "We haven't had the results that we shoot for every time but I'm proud of this group and yeah, I have no problem.

In a bizarre sequence at the end of the first half, Sherman jumped offside on a Bills field goal attempt and brought down kicker Dan Carpenter.

NFL senior vice president of officiating Dean Blandino said that Sherman should have been penalized for unnecessary roughness on the play, but no flag was thrown.The NFL has said that it will review the performance of referee Walt Anderson and his officiating crew.The crew will not work a game Week 10, but a league source told ESPN's Ed Werder that those assignments were predetermined before the season started.

"That guy [Carpenter], he hams it up a little bit, too, which made it bad," Carroll said. "But he was able to play that same play, fortunately."

Carroll said the officials should have blown the whistle and ruled that Sherman was unabated to the quarterback.

"Then if a guy comes off the edge, they blow the whistle, and he comes and drills the quarterback, then they give you unnecessary roughness," Carroll said. "That's what the call should have been in that case."

Sherman said after the game that he didn't hear the whistle and noted that Carpenter continued on trying to kick the ball.

"He should avoid the contact if he hears the whistle," Carroll said. "Otherwise he plays the play out."

The Bills weren't ready to let the controversy go on Tuesday. They tweeted a picture of the collision, the words "For all those in need of clarification..." and an excerpt from the NFL rulebook on unnecessary roughness.

Information from ESPN's Mike Rodak was used in this report.

Ryan not fan of Carroll's criticism
On his conference call, Bills coach Rex Ryan responds to criticism from Seahawks coach Pete Carroll saying that Ryan should worry about coaching his own guys and not make comments about players on another team.

Everyone has an opinion on Sherman's hit on the Bills' kicker
While the Seahawks escaped with a win over the Bills on Monday Night Football, the biggest story was Richard Sherman not being called for roughing the kicker at the end of the first half, resulting in a war of words.
Related topics:
sportsespnpete carrollnflseattle seahawksrichard shermanrex ryanbuffalo billsdan carpenter
Copyright © 2021 ESPN Internet Ventures. All rights reserved.
More Videos
From CNN Newsource affiliates
TOP STORIES