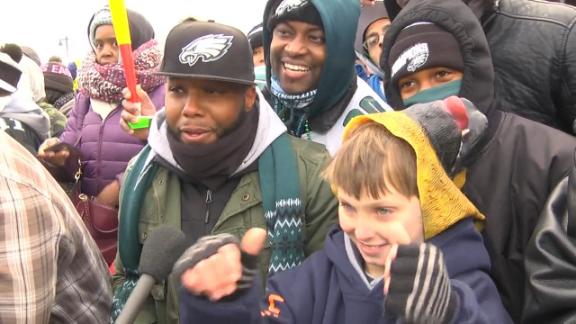 PHILADELPHIA -- Philadelphia's first Super Bowl parade stepped off Thursday as hundreds of thousands of Eaglesfans jammed the city's main thoroughfares to celebrate an NFL title many of them never thought they'd see.

Fans clad in Eagles green lined up 20 deep in spots to catch a glimpse of the champs. Bundled up against freezing winds, some fans from New Jersey walked across the nearly 2-mile-long Benjamin Franklin Bridge just to get into the city.

Players are cruising along the 5-mile parade route atop open-air double-decker buses. They started off near the team's stadium just before 11 a.m. Thursday and will wind up at the art museum steps that Sylvester Stallone climbed in the "Rocky" movies.

Eagles owner Jeffrey Lurie stood atop a bus along with quarterbacks Nick Foles, Carson Wentz and third-stringer Nate Sudfeld as they made their way through the throngs. Lurie held a sign reading "Thank You Fans," and a smiling Super Bowl MVP Foles brandished the Vince Lombardi Trophy.

Coach Doug Pederson disembarked from the bus to show off the trophy to the thrilled crowds; other players tossed T-shirts to fans along the route.

Organizers said they prepared for as many as 2 million people to jam the parade route.

As the sun rose, fans braved frigid wind chills in the low 20s to secure a prime viewing spot. Fans camped out in cars and office buildings and even in tents to make sure they could witness the champs heading up Broad Street, the main thoroughfare between the team's stadium and City Hall that was already clogged with fans about four hours before the parade started.

"We were wondering if we would ever see the Eagles win a Super Bowl in our lifetimes, and we may not ever see another one,'' said John Thompson, 56, of Downingtown, Pennsylvania. "That's why we're here today.''

The Super Bowl parade caps a glorious week for jubilant fans celebrating an NFL title that had eluded them for nearly 60 years. Led by a backup quarterback inFoles and the second-year coach Pederson, the Eagles beat the New England Patriots 41-33.

Schools, museums, courts, government offices and even the Philadelphia Zoo were shut down so the city could fete an underdog Eagles team that few outside Philadelphia thought would beat the mighty Patriots, led by superstar quarterback Tom Brady and coach Bill Belichick.

Trains coming in from the suburbs were jammed, and riders had to wait for multiple trains just to cram inside. Parking lots at suburban New Jersey rail stations were filled and closed hours before the 11 a.m. start.

For Thompson and his buddies Don Smith and Craig Moyer, coming to the parade was a "bucket list event."

Smith said he came in from Harrisburg, Pennsylvania, hitting the road at 3 a.m. and meeting his pals at 5 a.m.

Moyer, also of Downingtown, said he came to the parade to honor his late mother, a lifelong Eagles fan.

"My mother was from the coal regions; she passed at 91 years old," the 66-year-old said. "She was an Eagles fan who used to tell me about the old championship games. So this is for her. We're down here for her."

Mayor Jim Kenney asked fans to celebrate with passion and pride after Sunday's wild postgame celebration was marred by "knuckleheads" who resorted to violence and vandalism.

"Now remember -- act responsibly, don't ruin this for the fans who have waited decades for what will be a historic day as the Eagles finally parade up Broad Street," he said. "We are, after all, the city of brotherly love and sisterly affection."

A gas station convenience store that was looted and vandalized after Sunday's game was cleaned up and loaded with snacks -- and about 20 police officers were in position to make sure it stayed that way.

The parade also touched off a bit of a beer war.

Bud Light offeredfree beer to revelers at two dozen bars along the parade route, thanks to a promise its brewer made to Eagles offensive tackle Lane Johnson before the season.

Not wanting to be upstaged by an out-of-towner, Philadelphia-based Yards Brewing said it will offer fans a free Philly Pale Ale on parade day in the brewery's taproom. 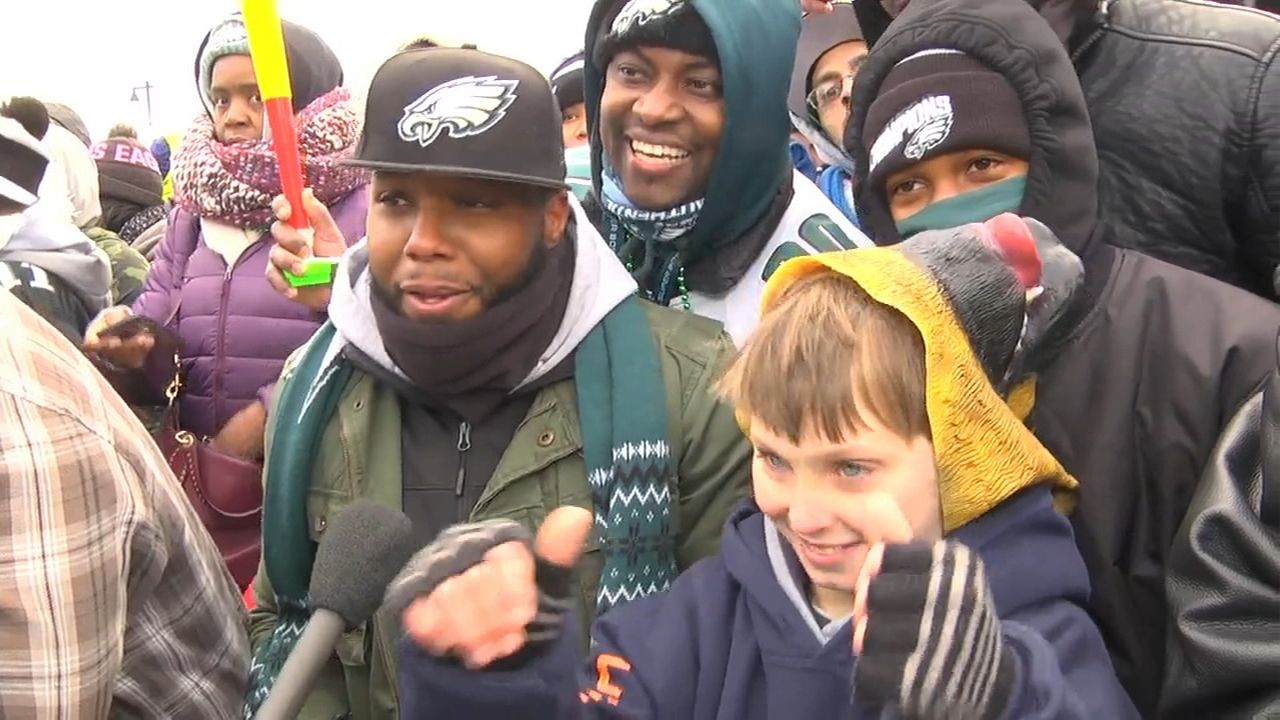