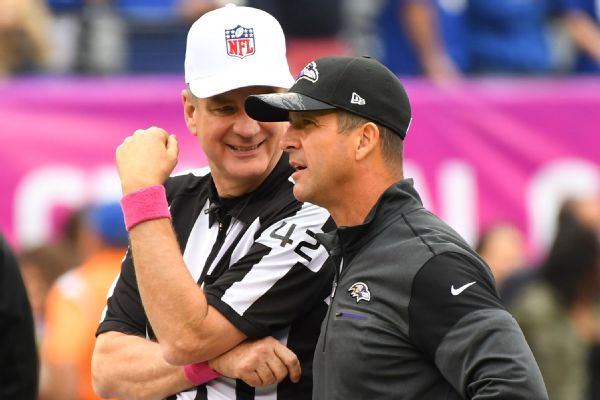 Leading by a touchdown with the clock winding down, the Baltimore Ravens successfully ran out the game's final 11 seconds on fourth down by intentionally committing holding penalties against all nine Cincinnati Bengalsplayers who rushed their punter, giving Sam Koch the time to dance around the end zone before finally conceding a safety.

"I tried to mention that was the best safety ever taken, and what I meant was, it was the best-executed safety ever because we kept him clean the whole time," Ravens coach John Harbaugh said after his team's19-14 victory. "But [linebackerTerrell Suggs] says nothing can top the Super Bowl safety."

Suggs was referring to the safety that clinched Super Bowl XLVII -- which, not coincidentally, came on the very same playcall. Back then, the Ravens decided to punt from their end zone while clinging to a five-point lead against the San Francisco 49ers with 12 seconds remaining.

Harbaugh ordered a play that called for his punt protectors to intentionally hold the 49ers' rushers, giving his punter, Koch, a better opportunity to kill time before stepping out of bounds for a safety.

There was no downside to that decision, or the one Sunday. The Ravens would either give up two points or have to punt again after a minimal markoff for a holding penalty.

They probably wouldn't have been able to do it two plays in a row if there had been time left on the clock. Referee Clete Blakeman could have declared it a "palpably unfair act," and the clock would have been restored to its original time if they had tried it again.

Bengals cornerback Adam Jones called it a "smart play," and Koch said it worked even better than it did in the Super Bowl.

"We know what we did wrong in the Super Bowl," he said, "and we kind of learned from it and just made sure that everybody did what they needed to and hold on as long as they could and ended up winning the game."

He said the team practices the play, and everyone knew that a penalty would not lead to an untimed down "as long as a hold wasn't in the end zone."

"With [special-teams coach] Jerry [Rosburg] and Harbaugh, even though it may only happen once or twice in four years, it's something that we practice yearly, and we make sure we have all of our stones unturned, and when situations like that arrive, we can have them at our disposal," Koch said.

Ravens seal win on wild final play
John Harbaugh breaks down the safety the Ravens took to end the game against the Bengals, calling it one of the best safeties ever taken.

Ravens hold off Bengals 19-14
The Ravens finally beat the Bengals for the first time in six meetings by holding off a late Cincinnati rally for the 19-14 win.