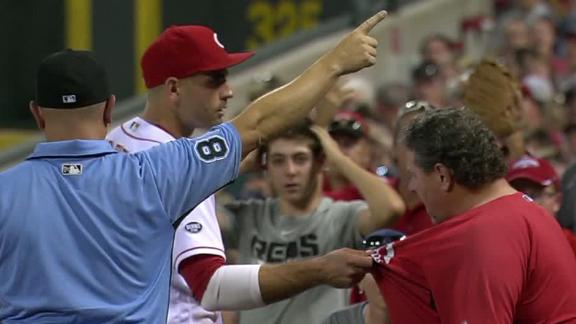 ESPN
Cincinnati Reds first baseman Joey Votto doesn't come to your job and bother you, and it seems he'd like to be paid the same respect at his place of business.

Playing at home against the St. Louis Cardinals, Votto briefly engaged with a Reds fan while attempting to catch a foul ball along the first-base line in the top of the seventh inning.

The Reds star was thwarted from catching the ball when he made contact with a fan in a Reds shirt who was also going for the ball. A displeased Votto briefly stared at the adult fan before grabbing at the Reds logo on the man's shirt, presumably underscoring that the Cincinnati fan should attempt to stay out of the way of the home team's defense.

Although neither man came away with the offering off the bat of the Cardinals' Stephen Piscotty, the fan did eventually get a ball -- and an apology -- from Votto.

Television cameras at the game caught a glimpse of the ball, which read, in part, "Thanks for being so understanding."

This was not Votto's first run-in with a fan. The veteran first baseman has taken to tweaking fans on the road by feigning throwing souvenir balls into the stands before tucking them away.