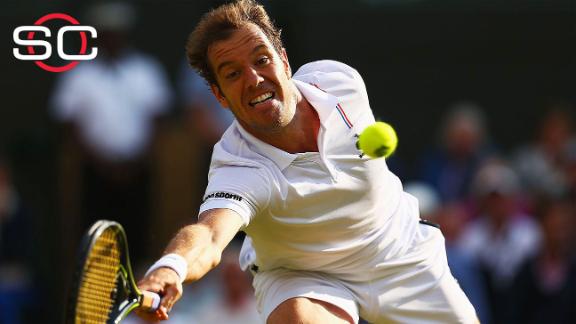 No. 21Richard Gasquetbroke form in the final match of the day as he outlasted Wawrinka, the French Open champ, in five grueling sets 6-4, 4-6, 3-6, 6-4, 11-9,preventing Wimbledon from having the top 4 men's seeded players in the semifinals for the first time in 20 years.

Gasquet, who failed to serve out the match at 5-3 in the fifth set, reached the Wimbledon semifinals for the first time since 2007.

"The last game was incredible," he said. "I kept fighting a lot. And I did it. It's a great match for me. It would be difficult for me to lose that one after [leading] 5-3."

While Federer, a seven-time champ, and Murray, the 2013 winner, are both one win away from another Wimbledon final, they will have to go through each other to get there.

Despite losing serve for the first time all tournament, Federer overwhelmed Gilles Simon 6-3, 7-5, 6-2 to advance to the semifinals here for the 10th time, and to the final four of a Grand Slam tournament for the 37th time.

Next up for the 17-time Grand Slam champion is Murray, who beat Canada's Vasek Pospisil 6-4, 7-5, 6-4 to reach his sixth semifinal here.

"The road is long getting here," Federer said. "But still I feel like I'm fresh and I've got energy left in the tank for hopefully a great match with Andy, and then we'll see."

Gasquet will next face defending champion Djokovic, who has gotten this farfor the sixth straight year after beating Marin Cilic6-4, 6-4, 6-4 on Centre Court.

"Of course, he will be the favorite of the match," Gasquet said. "Everybody knows that."

Going for his third title, the top-ranked Serb was in total control, as he never faced a break point and extended his career mastery over Cilic, the reigning U.S. Open champion, to 13-0.

Federer has never lost in the Wimbledon semifinals, holding a 9-0 record. He has a 12-11 edge over Murray, but the Briton beat him on Centre Court in the final of the 2012 Olympic tournament -- a few weeks after Federer defeated Murray in the Wimbledon final for his seventh title.

Murray overpowered Federer in straight sets in the Olympic match, but since then, Federer has won four of their past six meetings, including the past three.

"I know Roger very well," Murray said. "We've played each other many times. We saw each other this morning -- walked to the practice courts together and stuff. We get on well. But obviously on Friday, different story."

Federer put on another vintage grass-court display Wednesday to take Simon apart in just more than 90 minutes on Court 1, in a match that was interrupted twice by rain delays.

"The stop-and-gos are tough," Federer said. "You never know how you're going to come back from them, but I think I used them to my advantage. Either I stayed ahead or I was able to make the difference. The breaks actually rather helped me than hindered me."

The only surprise came when Simon broke Federer -- at love no less -- to draw even at 5-5 in the second set. It was the first time Federer had been broken in 67 service games at Wimbledon, a streak that stretched to 116 games when including his title run at June's grass-court tournament in Halle, Germany.

Not to be rattled, Federer broke Simon in the very next game. After rain suspended play at 6-5, 15-0, Federer finished the set with a service winner, ace, ace. Federer broke twice in the final set.

"Reaction was always going to be important for me once the streak ended and the serve was broken," he said. "I think I was able to do that. Gilles is obviously a quality return player, and the game I got broken, he was too good, so no problem to accept that."

Murray never lost serve, saving the one break point he faced, and broke Pospisil three times and had only 13 unforced errors. He extended his record to 4-0 against the Canadian, all in straight sets.

Pospisil twice was warned by the chair umpire for taking too much time between his service points. The second cost him a first serve in the ninth game of the third set, and Murray broke.

"I think a lot of times these umpires, they seem to just want to be seen," said the Canadian, who also hit a desperation between-the-legs shot that was returned for a winner by Murray. "I don't know why they do it at a time like that. I went 30 seconds. How many times do you see the top guys go more than that and they don't get any violation, especially when it's important moments."

Andy also is not the only Murray in the semifinals at Wimbledon this year -- so is his older brother, Jamie, who plays with partner John Peersin men's doubles.

The Murrays are the first brothers to reach the semifinals in singles and doubles at the same Wimbledon since John and Neale Fraser did it in 1962.