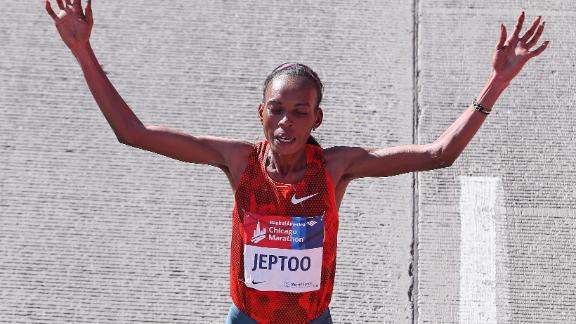 NAIROBI, Kenya -- Rita Jeptoo, a three-time winner of the Boston Marathon and two-time Chicago Marathon champion, was handed a two-year doping ban Friday in a case that has cast a shadow over Kenya's famed distance runners.

Jeptoo tested positive for the blood-booster EPO in an out-of-competition test last September, a few weeks before winning her second straight Chicago Marathon title. Both the "A" and "B" samples were positive.

Athletics Kenya announced Friday that Jeptoo was suspended from all competition until Oct. 29, 2016. The sanction rules her out of this year's world championships in Beijing and next year's Olympics in Rio de Janeiro.

Jeptoo has the right to appeal her sanction to the Court of Arbitration for Sport. Her two-year penalty is the maximum for a first violation specified by the old World Anti-Doping Agency code, which was in effect when she tested positive. That penalty was doubled in the new code that went into effect Jan. 1.

In addition, the Boston Athletic Association and the Chicago Marathon said in separate statements that they would re-evaluate Jeptoo's victories after the IAAF completes the process and any appeals are heard.

"Drugs and doping in our sport will not be tolerated," B.A.A. executive director Tom Grilk said in a statement. "... We already have severe and defined penalties, but the Rita Jeptoo case has brought to light the need to work yet further in that regard to ensure our sport. We are deeply disappointed in the findings involving Rita Jeptoo, and we are committed to upholding the integrity and credibility of the Boston Marathon."

"My stance on anyone caught cheating or doping is that they should receive a lifetime ban," Flanagan told ESPN. "Studies have shown that someone who's tested positive for something like EPO, which Rita apparently has used, have benefits that go beyond just the usage. If she used EPO for a number of years, she was able to train at a much higher level during those years.

"Those benefits can be reaped for years to come. Let's say she doped from 2011 to 2014, the benefits of training on those drugs will extend for another four years. In my mind, I'm happy that she's banned for two years, and I'm happy we caught her in the act. At the same time, I don't feel like it's completely settled. I feel a little uneasy about it because she can come back, train during those two years and still reap the benefits of those drugs."

Meb Keflezighi, the men's winner of the 2014 Boston Marathon, told ESPN he is "in support of a lifetime ban for any athlete that tests positive for doping."

The 33-year-old Jeptoo is the biggest name among dozens of Kenyan athletes who have failed drug tests in recent years. The World Anti-Doping Agency has urged Kenya to step up its drug-testing program and is working with the east African country to help set up a national anti-doping body.

"For now, the case of Rita has come to a rest and what remains now for us is to move on," Athletics Kenya president Isaiah Kiplagat told The Associated Press. "We shall see how we shall work with the new anti-doping agency of Kenya in partnership to deal with the vice."

The World Marathon Majors -- the six-race consortium that includes Boston, London, Berlin, Tokyo, Chicago and New York -- has the authority to demand repayment of prize money under the terms of its athletes' contract. However, any such action and the stripping of her titles will remain on hold until the appeals process is exhausted.

Her $500,000 WMM bonus for winning both races last year is also in limbo until the case has run its course.

"Her positive test has made it very difficult for us," two-time women's marathon world champion Edna Kiplagat said. "We keep on being asked about doping every time we go to compete out there, and I'm hoping that her punishment will make others stop engaging in this bad thing.

"I hope the [ban] will deter Kenyan athletes to stop taking shortcuts. It will be a lesson for others. It's unfortunate since nobody wants anyone to be banned. If you take something like EPO, which is injected as a professional athlete, it is obvious you know what you are putting in your body."

Kenya has been under close scrutiny since German broadcaster ARD alleged in 2012 that doping was common among the country's distance runners.

Kiplagat, who stands to be upgraded to winner of the World Marathon Majors, said this month that Athletics Kenya has banned or suspended 32 athletes for doping in the past five years.

"Our athletes should work hard to ensure we don't bring down what has taken 50 years to build," the 2008 Olympic men's 800-meter champion Wilfred Bungei told the AP on Friday.

Anti-doping bodies from Norway and China are helping Kenya set up its own anti-doping agency.

Bonnie Ford of ESPN.com and The Associated Press contributed to this report.