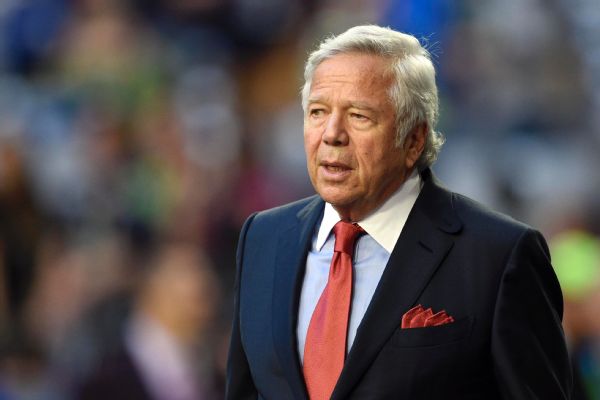 After New England's 34-28 comeback, overtime victoryover the Atlanta Falcons,Patriotsowner Robert Kraft was asked if this is the greatest of his team's Super Bowl victories.

"Two years ago, we won our fourth Super Bowl down in Arizona, and I told our fans that was the sweetest one of all," Kraft said. "But a lot has transpired during the last two years, and I don't think that needs any explanation, but I want to say to our fans, our brilliant coaching staff, our amazing players who were so spectacular: this is unequivocally the sweetest. And I'm proud to say for the fifth time, we are all Patriots, but tonight, for the fifth time, the Patriots are world champions."

Kraft said in the days leading up to Super Bowl LI that Deflategate penalties levied by the NFL against quarterback Tom Brady and the team had an impact on the 2016 Patriots.

Brady served a four-game suspension for the January 2015 incident that months of court battles couldn't overturn. The Patriots were fined $1 million and docked a first-round pick in 2016 and a fourth-round pick in 2017.

"I think in a way," Kraft said last week, "that galvanized our whole team."

President Donald Trump took to Twitter to congratulate the Patriots on their victory.

Brady, who was named Super Bowl MVP for a record fourth time, won his record fifth Super Bowl in a game he dedicated to his mother, Galynn, who has been battling an undisclosed illness.

"We all brought each other back," Brady said on the FOX telecast. "We never felt out of it. It was a tough battle. They have a great team. I give them a lot of credit. We just made a few more plays than them."