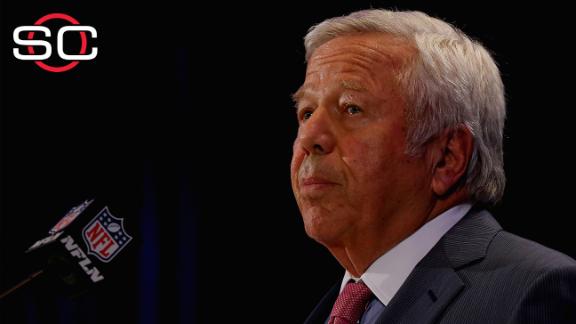 The Patriots were fined $1 million and docked two draft picks -- a first-rounder in 2016 and a fourth-rounder in 2017 -- by the NFL after an investigation found that star quarterback Tom Brady was "at least generally aware" of a scheme to illegally deflate footballs for the AFC Championship Game.

Striking a conciliatory tone, Kraft said Tuesday that the Patriots will not appeal the penalties.

"Although I might disagree what is decided, I do have respect for [commissioner Roger Goodell] and believe that he's doing what he perceives to be in the best interests of [all 32 teams]," Kraft said, while speaking to the media at the NFL owners meetings. "So in that spirit, I don't want to continue the rhetoric that's gone on for the last four months.

"I'm going to accept, reluctantly, what he has given to us and not continue this dialogue and rhetoric. We won't appeal."

Kraft said that he was putting the league before his franchise because "at no time should the agenda of one team outweigh the collective good of the 32."

The league also suspended Brady for four games, a punishment the he is appealing through the National Football League Players Association. George Atallah, the NFLPA's executive director of external affairs, tweeted shortly after Kraft's announcement that Brady will continue his appeal.

Despite widespread speculation that Kraft dropped his opposition to the punishment in exchange for promises regarding who will handle Brady's appeal, sources told ESPN NFL Insider Adam Schefter that the league made no assurances to the Patriots or Kraft regarding Brady's fate.

The NFLPA formally asked Goodell to recuse himself as the arbitrator in Brady's appeal later Tuesday, following through on a statement sent to the league last week.

Kraft, who did not take questions from reporters Tuesday, remained critical of the NFL's handling of the incident, saying that the process "has taken way too long." He called the past few weeks "emotionally charged" and noted that he had two options -- "to end it or extend it."

"I think I made it clear when the [Wells] report came out that I didn't think it was fair," he said. "There was no hard evidence and everything was circumstantial. At the same time, when the discipline came out [from the NFL], I felt it was way over the top as it was unreasonable and unprecedented in my opinion."

Kraft said, however, that he took some time to arrive at his final decision on whether to appeal, explaining that he likes to "measure nine times and cut once." He acknowledged that "maybe if I made the decision last week, it would be different than it is today."

Longtime Patriots receiver Troy Brown was among those not expecting Kraft to give up his appeal.

"I didn't anticipate him giving up the fight on that one," Brown told the Boston Herald. "I'm not sure if he had enough owners supporting him. I don't know. I haven't spoken to him, and I didn't hear what he had to say.

"But it really isn't a good look for the NFL, going back and forth about the PSI of a football. I think there are so many other great topics they can talk about. But it was turning into Wrestlemania."

The NFL and the Patriots previously had been engaged in talks to resolve their differences without an appeal or possible litigation, sources told Schefter.

Kraft and Goodell sat down and talked "for quite a long time" before hugging at a birthday party Saturday night in New York for CBS Sports chairman Sean McManus, an industry source told Schefter.

This is the second time in Kraft's 21 years as owner that the Patriots have been disciplined for breaking NFL rules. In 2007, they were penalized for videotaping New York Jets signals during a game. They didn't challenge fines of $500,000 against coach Bill Belichick and $250,000 against the club, along with the loss of a first-round draft pick.

ButKraft also has long been a confidant and adviser to Goodell and was one of the owners who championed Goodell to replace Paul Tagliabue in 2006. Kraft also was one of the leaders in getting key owners and the union together to end the 2011 lockout, and he's been a major force in negotiations with TV networks.

"What I've learned over the last 21 years is the heart and soul and strength of the NFL is the partnership of 32 teams," he said Tuesday.

Kraft said that the Deflategate issue has produced "two polarizing audiences," explaining that one end of the spectrum is "Patriots fans throughout the country who have been so supportive and really inspirational to us, and believing in us," while the other side is "fans that feel just the opposite."

"What I've learned is that the ongoing rhetoric continues to galvanize both camps, and I don't see that changing," he said. "They will never agree."

He realizes that a portion of his fan base won't look favorably on his choice to not appeal.

"I know a lot of Patriot fans are going to be disappointed in that decision, but I hope they trust my judgment and know that I really feel, at this point in time, that taking this off the agenda is the best thing for the New England Patriots, our fans and the NFL," Kraft said.

Kraft reluctantly accepts punishment
Patriots owner Robert Kraft discusses his decision to accept the punishment handed down by the NFL in the Deflategate investigation.

Patriots won't appeal Deflategate penalties
Mike Reiss and John Clayton reacts to the news that the Patriots will accept their punishment from the NFL in the Deflategate investigation, and what this means for the appeal process for the NFLPA and QB Tom Brady.