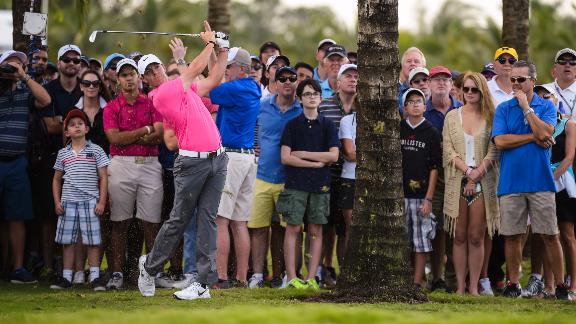 DORAL, Fla. -- The 3-iron Rory McIlroy tossed into a pond at Trump National Doral on Friday was retrieved by a scuba diver Saturday during the third round of the WGC-Cadillac Championship.

And the void it created in McIlroy's bag was not filled.

McIlroy made the unusual decision not to replace the club in his bag, instead playing with just 13 clubs, one under the maximum allowed. McIlroy said he couldn't remember ever doing that, but it didn't seem to matter as he shot an even-par 72. He sits 10 strokes back of tournament leader J.B. Holmes.

"I didn't need it," McIlroy said. "I guess I looked where pin positions were and where the tees were and I didn't need a 3-iron, and I felt good with the wedges that I have in the bag this week. I just went with what I had."

McIlroy flung the 3-iron into the pond near the eighth hole in anger after his second shot found the water on Friday. McIlroy, ranked No. 1 in the world, said he didn't know if another 3-iron had arrived at the tournament, as he suggested one would be ordered.

He also said Friday he often will forgo a 3-iron and play with four wedges. But there were just three wedges in his bag, along with a driver and two fairway woods. He had a putter and a 4-iron through 9-iron.

"My iron play just isn't where I want it to be," said McIlroy, who has now played five rounds on the PGA Tour this year without shooting in the 60s.

"Everything else feels good. I'm driving the ball pretty well. Hitting it good off the tee. Just not giving myself enough opportunities from hitting good tee shots, and I think that's the one thing I need to work on a little bit."

His old 3-iron, meanwhile, is now resting in the hands of the diver who rescued it from the water at Doral on Saturday.

Iron Play Rory's Downfall At Doral
World No. 1 Rory McIlroy explained which parts of his game have been lacking this week at the WGC-Cadillac Championship.

McIlroy Takes Timeout Saturday
Michael Collins and Bob Harig break down the third round of the WGC-Cadillac Championship, where Rory McIlroy played with 13 clubs and J.B. Holmes took a commanding lead.