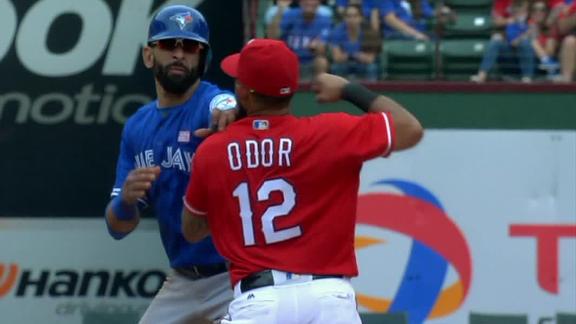 ARLINGTON, Texas -- A feud simmering since Jose Bautista's bat flip in last year's American League Division Series boiled over into a brawl in the final game of the season between the Toronto Blue Jays andTexas Rangers.

Bautista and Texas second baseman Rougned Odor got into a fistfight behind the bag after a hard slide by the Toronto slugger at Odor's legs in the midst of a double play in the top of the eighth inning. Players from both teams rushed the field, and Odor shoved Bautista then landed a punch to his face.

"I was pretty surprised," Bautista said. "I mean, obviously, that's the only reason that he got me, and he got me pretty good, so I have to give him that. It takes a little bit bigger man to knock me down."

Bautista had reached base after being hit by a pitch from Matt Bush.

"I had a hard slide at second base. I could have injured [Odor, but] I chose not to," Bautista said. "I tried to send a message that I didn't appreciate getting hit [by the pitch]."

Odor wasn't available to reporters after the game.

Bautista and Odor were ejected after the brawl, as were Toronto third basemanJosh Donaldson and Texas bench coach Steve Buechele.

Umpires needed about 10 minutes to restore order, and Blue Jays reliever Jesse Chavez hit Prince Fielder with the next pitch when the game resumed, which caused both teams to leave their dugouts again, though this time no punches were thrown.

Chavez and Blue Jays coach DeMarlo Hale were then ejected after an earlier warning for both teams when Bautista was hit by Bush. Hale was serving as acting manager after John Gibbons was ejected in the third inning for arguing balls and strikes.

Crew chief Dale Scott told a pool reporter that Gibbons' return to the field during the brawl "will be in the report and Major League Baseball will take care of it."

"I didn't want to sit here and drink too much wine," Gibbons said. "You got to go out there. I'm sure the league will say something about that, but it's kind of the manager's responsibility."

Toronto first-base coach Tim Leiper was also ejected in the third inning in a separate dispute before Gibbons was tossed.

After playing each other seven times early in the season, the Rangers and Blue Jays do not meet again in the regular season. Bautista called it "cowardly" that the Rangers waited until his final at-bat of the series to seek retaliation for last year's flip, and Gibbons agreed.

"It was ugly and unfortunate," Gibbons said. "To me, it was gutless. The other 29 teams, they come at you right away, but to wait until the end, it just sort of tells you something. Everybody is going to say, 'Oh, it was a one-run game. The ball got away.' That ain't going to fly."

After the game, a 7-6 Texas victory, Toronto pitcher Marcus Stroman tweeted his thoughts on Odor's actions.

Rangers manager Jeff Banister attributed the apparent bad blood to "two hard-nosed ballclubs that love to play the game of baseball and go at it hard."

"As far as what happened inside the scrum out on the field, there was a lot of things going on," said Banister, who was making emotional gestures toward nobody in particular, even after the roughly 10 minutes it took for umpires to restore order. "We could sit here for the next hour and talk about that. But I don't have that time. I've got a bird to catch." 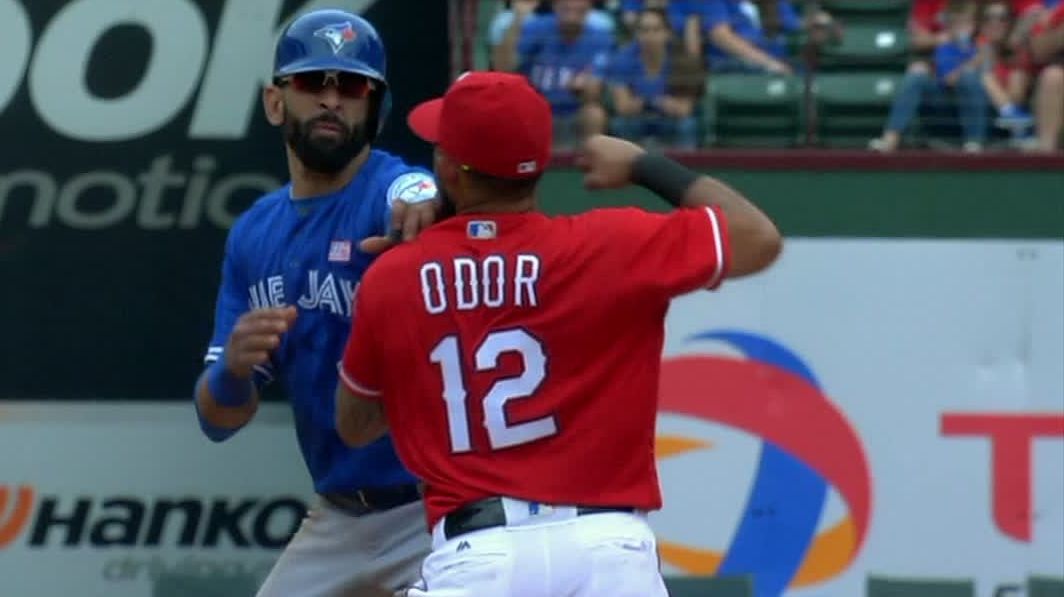