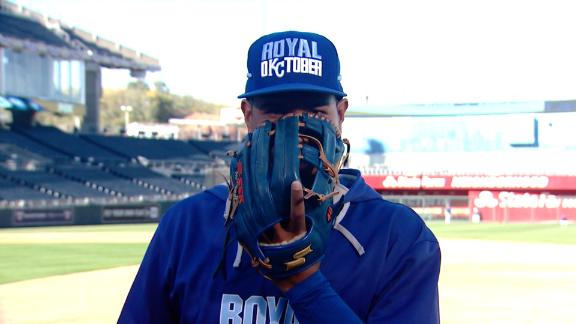 SAN FRANCISCO -- Salvador Perez is a player who doesn't want to make a stink.

The upbeat All-Star catcher for the Kansas City Royals wore Victoria's Secret perfume late in the 2013 season -- teammate Alcides Escobar sprayed some on him, and Perez had a four-hit game.

"We won. We celebrated. I asked him, 'Where did you buy that?'" Perez recalled this week at the World Series. "I need to buy some, maybe to wear for the rest of my life."

He stuck with the smell of success and switched this year to 212 Men by Carolina Herrera cologne. Escobar buys it for him, and Perez has gone through three bottles.

"The weirder the team, the better the team, usually," Royals outfielder Raul Ibanez said. "We've got a lot of weird stuff that goes on in here."

Perez said San Francisco's Pablo Sandoval, Detroit's Victor Martinez and Texas' Prince Fielder are among the players who have remarked about his baseball bouquet. Detroit's Miguel Cabrera asked where he could get some for himself.

And the strange scent of Perez and Escobar has become part of Kansas City's identity.

"I know they're sweet smelling on the bench, that's for sure," Royals manager Ned Yost said. "That's one of the more unusual ones. But it's been effective, so it works for them."

Still, not everyone has taken notice of the olfactory addition to the diamond.

Perez was a 16-year-old free agent in Venezuela when he signed with the Royals in 2006. He spent parts of three seasons at rookie ball, advanced to Class A in 2009 and sped through the upper minors to make his big league debut in August 2011.

"We've been fortunate in the sense that Salvador Perez moved very quickly through our system at a premium position," Royals general manager Dayton Moore said. "It doesn't often happen."

The 6-foot-3 catcher led the majors with five pickoffs in 2012 despite appearing in just 74 games. He won his first Gold Glove in 2013, his first full season as a starter, and was among the finalists announced Thursday for this year's AL award.

Perez homered in Kansas City's 7-1 opening loss to San Francisco, then hit a two-run double for a 5-2, sixth-inning lead as the Royals won the second game 7-2 on Wednesday night.

He scored moments later and got into a dustup with Giants reliever Hunter Strickland at the plate. The dispute quickly calmed down.

"I think his No. 1 unique attribute -- aside from his talent, which I think puts him with the elite catchers in the league -- is his energy and his excitement, his demeanor," said Jeremy Guthrie, Kansas City's Game 3 starter.

"Always very happy-go-lucky, no matter the situation: men on base, cruising, not cruising. He's always very positive. Has a smile on his face. ... That builds confidence in the pitcher, when you know he believes in you, and he's pushing for you to get over whatever obstacles are in your way."