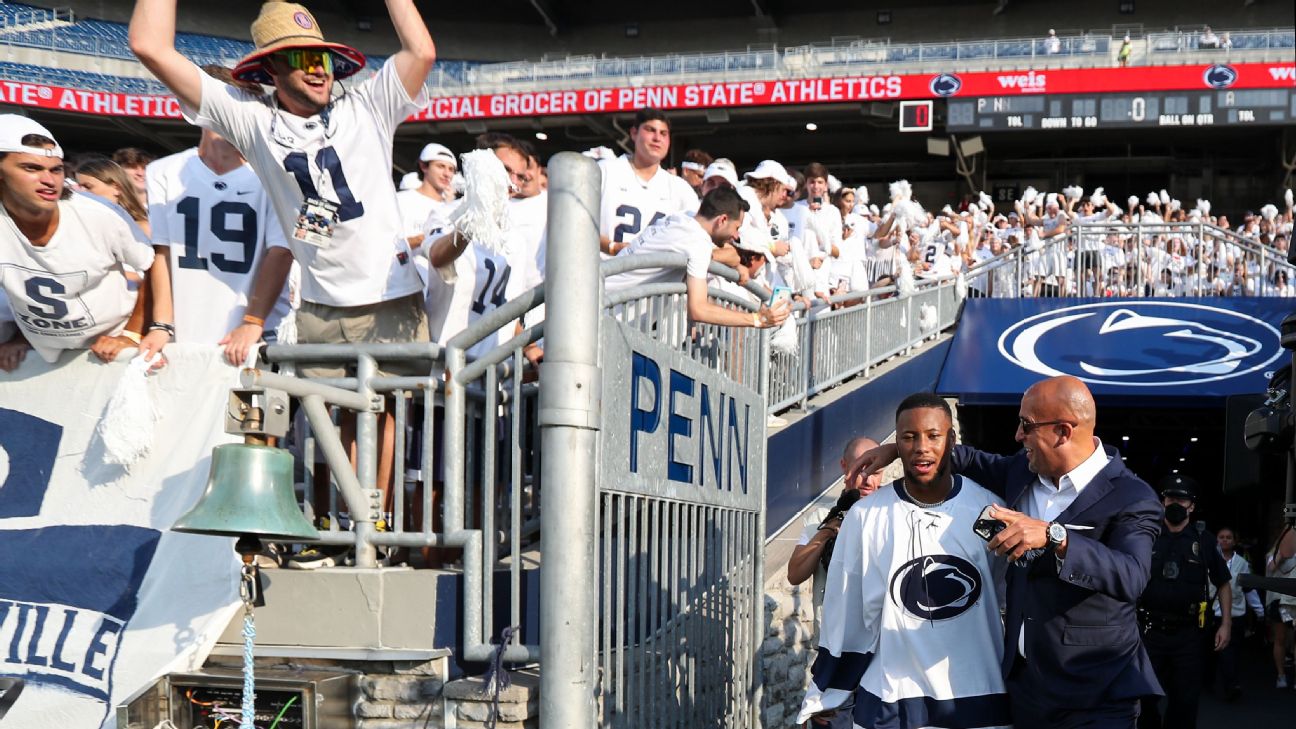 On Saturday night, one of college football's greatest traditionsmade its triumphant return. The No. 10 Penn StateNittany Lions and their defense held on against the No. 22 AuburnTigersfor the 28-20 victoryin Beaver Stadium for its White Out game. The stadium was packed for this prime-time matchup -- 109,958 people to be exact -- the tenth-highest attendance in stadium history. Among those in attendance was Penn State legendSaquon Barkley.

The former Nittany Lions player and current New York Giants running back returned to Happy Valley, where he became a household name. He played three seasons for Penn State and had numerous highlight plays. While playing for the team from 2015-2017, Barkley set the school record for career rushing touchdowns (43) and total rushing touchdowns (53). His outstanding college career resulted in him being selected No. 2 overall in the 2018 NFL draft.


Barkley was busy in his return to his alma mater, and definitely enjoyed his time at the White Out game. Take a look at everything he did during his time back on campus, which started with his appearance as the guest picker on College GameDay.

Barkley arrived at Penn State in style, via private jet, which is often used for GameDay pickers. Barkley rushed for 57 yards in the Giants' 30-29 loss to the Washington Football Team on Thursday. Despite the loss, Barkley was thrilled to be back at State College and put on his analyst cap to pick this week's games across college football.

Barkley made picks for various matchups, but one of his selections was a no-brainer. He said that there was no way he would pick Auburn over his Nittany Lions. Most of the College GameDay crew agreed with the 24-year-old back, with David Pollack being the only analyst who picked Auburn.

While making his pick, "Saquon Barkley" chants rang through the crowd, and the running back had a front-row seat for Lee Corso's headgear pick of the day.

Barkley, however, didn't come back to Happy Valley just to pick games, he was on the sideline and in the stands throughout Penn State's ranked macthup with the Tigers. It's safe to say that the audience was pumped to know No. 26 was a part of the crowd that received its first White Out game since 2019.


Before taking the field for his big-time matchup against the Tigers, Penn State head coach James Franklin made it a point to see his former player. Franklin coached Barkley for three seasons, and it looked like they were both happy to see each other. As they walked out to the field pregame, fans gave both of them a warm welcome. That was only the beginning of the high volume that constantly shook the stadium Saturday night.

Barkley received love from other athletic programs at the school. The men's and women's hockey team shouted him out on social media, and he wore a fresh hockey jersey pregame (which was white, of course). He also caught up with ESPN sideline reporter Holly Rowe and embraced the fans in the bleachers as he prepared to watch his former team battle Auburn.

During the early parts of the game, Barkley did his best to hype up the crowd. He led an electric "We Are" chant during a media timeout in the first quarter and got some facetime during the TV broadcast in the second.

The entire matchup with Auburn was a back and forth affair, with Penn State having to endure Bo Nix, the Tigers' defense, and even the referees at some points. However, the Nittany Lions' two late fourth quarter stops on defense were enough to squeak out the win. The fans did everything they could to impact the game with their voices, and people inside the stadium talked about how raucous the stadium was.

Barkley made sure to do his part in what was a successful return to his college home. 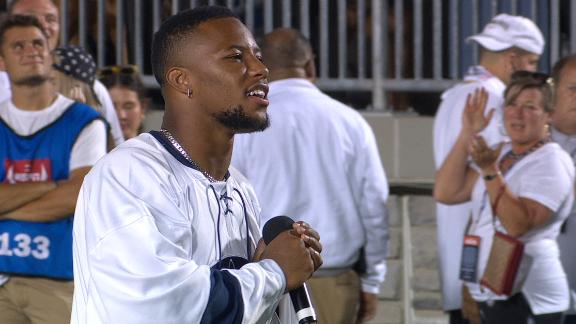