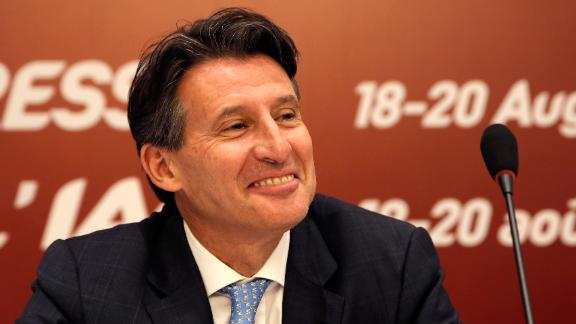 BEIJING -- After a final promise to the international track and field community that he'd always fight in their corner, Sebastian Coe won the election to replace Lamine Diack as IAAF president and took up the immediate challenge of restoring the image of a sport grappling with a doping controversy

Coe, 58, received 115 votes to Sergei Bubka's 92 in the election Wednesday to replace 82-year-old Lamine Diack of Senegal, who stepped down after 16 years.

Coe -- a two-time Olympic 1,500-meter gold medalist, former Conservative Party lawmaker in Britain and chairman of the London 2012 bid and organizing committee -- reportedly traveled 435,000 miles during the campaign and, unlike Bubka, had been nominated only for the top job without the fallback option of vice president.

"This for me is the pinnacle. It's my sport, my passion. It's the thing I've always wanted to do,'' said Coe, who earlier had told the IAAF congress that election victory was the most momentous occasion in his life besides becoming a father.

He praised Bubka for contributing to a campaign that "has given the sport a chance to pause for breath ... (and) renew itself. Elections are a good opportunity for the sport to sit and think about its future. I'm sure we're stronger for having been through that process.''

The result of Coe's election was received well in the international sport realm.

"We look forward to a positive and strong relationship with the new president in his avowed plans to protect the rights of the clean athlete,'' World Anti-Doping Agency president Craig Reedie said.

USA Track and Field had similar praise for Coe.

"USATF has had the opportunity to work especially closely with Lord Coe over the last three years, and we have been impressed with his vision for the sport, his dedication to its cause and his demonstrated effectiveness as a leader. His progressive view for how to market the sport and attract sponsors globally has the potential to truly transform athletics under his leadership," USA Track said in a statement.

He wished Coe every success to "lead our sport, which we really love -- we devoted our life for this great sport.

"I know athletics in the future will grow and become stronger and stronger. Nothing changed in my life. I will continue to serve athletics with dignity and big passion, as I did before."

The IAAF election, held in the lead-up to the world championships, which start Saturday in Beijing, has been overshadowed by intense criticism of the world body following media reports that it has failed to act on evidence of widespread blood doping.

German broadcaster ARD and Britain's The Sunday Times newspaper cited leaked test results from a 2011 study in an IAAF database and asserted that blood doping was rampant in the sport.

The IAAF last week denied it had tried to block publication of the study, and confirmed that 28 athletes had been caught in retests of their doping samples from the 2005 and 2007 world championships but said none of the athletes will be competing in this year's competition.

Coe, who last week described the allegations as a "declaration of war" against the sport, has proposed a fully independent anti-doping tribunal to deal with the issues.

"There is a zero tolerance to the abuse of doping in my sport. I will maintain that to the highest level of vigilance,'' Coe said. "That is something ... I will want to discuss with priority.''

There were 211 eligible member federations voting in the election, with Afghanistan and Iran absent and Gabon under suspension.

Jose Maria Odriozola of Spain was elected as treasurer.

In his last pitch to members at the congress, Coe vowed to share and widen responsibility for running the sport while committing himself fully to the role.

"I'm seeking your trust and support to lead this sport, but not to do it alone," he said. "I'm not asking to take power. I'm asking to share power, and to spread power.

"I will always be in your corner -- your fight is my fight."

Diack had not publicly endorsed either Coe or Bubka in the presidential election but was delighted to see his successor was from "a new generation coming up and a man who has devoted his life to the sport."

"It's a great moment we've just lived," Diack said. "We can say our sport is in safe hands that are able to carry it up to another level."

Coe: This is the pinnacle of my career
Newly elected IAAF President Seb Coe has vowed to uphold athletics' values and legacy, describing the job as the 'pinnacle' of his career