PARIS -- Top-ranked Serena Williams avoided an early upset when she rallied from one set down to beat unheralded German Anna-Lena Friedsam 5-7, 6-3, 6-3 in the second round of the French Open on Thursday.

Fifth-seededCaroline Wozniackiwasn't so fortunate, however, as her struggles on the red clay of Roland Garros continued with a 6-4, 7-6 (4) second-round loss toJulia Goerges.

She set up match point when she launched a huge forehand winner from the back of the court and followed that up with another big, cross-court forehand that flew out of the reach of Friedsam's outstretched racket.

Williams' relief was evident as she clenched her fist and let out a yell. She won here in 2013, and her other French title was way back in 2002.

"I know I'm capable of playing great tennis, just haven't seen it yet," said Williams, who lost in the second round last year.

"My level is literally a hundred times better than I played today. I think I take more solace in the fact I can play better as opposed to the fact that that's the best I could play. Then I would be in trouble."

Waiting for Williams in the third round is a familiar foe -- former No. 1 Victoria Azarenka, who advanced with a 6-2, 6-3 victory overLucie Hradecka.

The 27th-ranked Azarenka, a two-time champion at the Australian Open, has won only three of 18 career matches against Williams.

The bad run in Paris continued for Wozniacki, a former No. 1 and two-time finalist at the US Open who has never advanced beyond the quarterfinals at the French. She struggled throughout against the Goerges, looking distracted and picking dust from under her fingernails during a second-set changeover after losing her serve in the seventh game.

In the first set, Wozniacki broke Goerges in the fourth game only to lose her next two service games.She angrily thumped her racket on the clay after netting a backhand that allowed Goerges to pull ahead 4-3.

Goerges, who is ranked 72nd after once ascending as high as No. 18,overcame the sniffles, frequently pulling out a tissue to wipe her red nose.

"Today is very special as I haven't beaten a top-10 player for a long time," said Goerges, who advanced to the third round for the third time in five years. "I just told myself to be aggressive. It paid off in the end."

At the 2011 Australian Open, Schiavone beat the Russian in the longest women's match, by time, in Grand Slam history -- a 6-4, 1-6, 16-14 contest that lasted 4 hours, 44 minutes. Schiavone saved six match points in that match and converted on her third match point.

It did not last quite so long this time -- 3 hours, 50 minutes -- but Schiavone, who is 34 years old and won the French Open in 2010, needed to save one match point at 6-5 in the third set with a brilliant backhand winner.

She sealed victory when Kuznetsova -- a two-time Grand Slam champion who won here at Roland Garros in 2009 -- attempted a forehand drop shot that sank into the net, bringing to an end a topsy-turvy match featuring brilliant winners but also some sloppy serving, with a total of 18 breaks of serve.

Schiavone tilted her head back in relief and threw her arms up in the air in triumph after sealing the victory.

Williams was the headliner on a day when Americans went 4-0 in their second-round matches. Madison Keys, the 16th seed, breezed into the third round after beating Switzerland's Belinda Bencic 6-0, 6-3. Sloane Stephens had a 19-7 edge in winners in a 6-2, 6-4 victory over Heather Watson, and Irina Falconi, also advanced after she was extended to three sets by Sesil Karatancheva.

Serena discusses 'bad' performance
Serena Williams talks about her performance in her 5-7, 6-3, 6-3 win over Anna-Lena Friedsam in the second round of the French Open.

Serena escapes second round
Serena Williams rallied after losing the first set to defeat Anna-Lena Friedsam 5-7, 6-3, 6-3 to advance to the third round at the French Open. 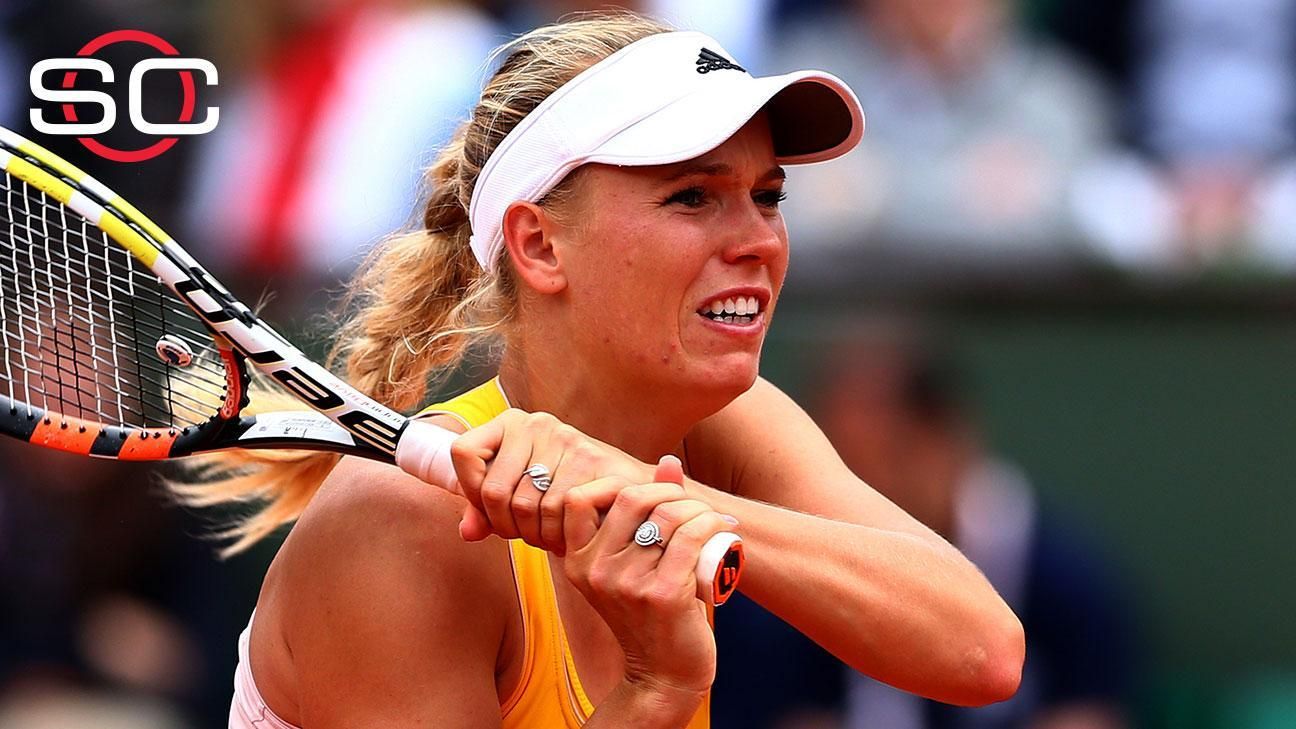 Wozniacki ousted in second round
Julia Goerges defeated No. 5 seed Caroline Wozniacki 6-4, 7-6 to advance to the third round at the French Open.