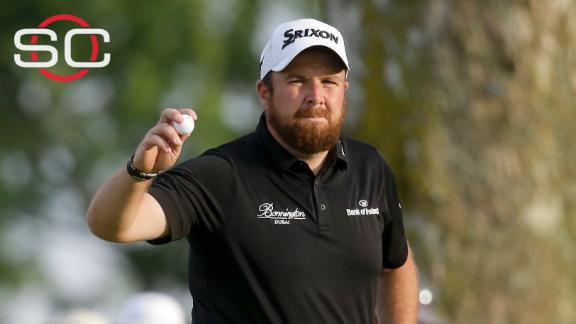 OAKMONT, Pa. -- Shane Lowry began the final day of the U.S. Open by making two birdies to tie an Oakmont record, post the best score of the third round and build a four-shot lead going into the final round Sunday afternoon.

"That's one of the best rounds of my career right there," Lowry said. "A 65 on this golf course, against this field, is pretty good."

Lowry was at 7-under 203, the best 54-hole score in nine U.S. Opens at Oakmont and matching Tom Watson's score from the 1978 PGA Championship. Lowry was four shots clear of Dustin Johnson and Andrew Landry.

Landry was more determined than ever not to go away. He made two quick bogeys, steadied himself with a par on the 16th and then drove the 17th green for a two-putt birdie. He closed with a 35-foot birdie putt for a 70 that put him into the final group.

The last player to win the U.S. Open on his first attempt was Francis Ouimet in 1913 at The Country Club, a victory that put golf on the front pages of newspapers for the first time in America. This might be no less shocking.

Landry is 28, the No. 624 player in the world who finally got a PGA Tour card this year and still hasn't finished in the top 40 of any tournament. He hasn't flinched all week, even thinking about being in the final group at his first major.

"Who can't be excited about that?" he said. "That's what you always hope for and dream for. Who knows what can happen?"

Johnson finally got a putt to fall, but no more than that. He had a 71 and was in the penultimate pairing with Lee Westwood, who shot a 69 and was at 2-under 208. Daniel Summerhays drove the 17th green and made eagle for a 69 to join Westwood at five shots back.

The only other player under par was Branden Grace, who finished his 66 on Saturday and was at 1-under 209.

Lowry left Oakmont on Saturday night with a two-shot lead. The four holes he played Sunday morning to wrap up the third round were all about setting the stage for the afternoon. The 29-year-old Irishman looked so relaxed he might as well have been playing a morning game at his home club.

Playing quickly as he does, he smashed his tee shot down the 15th fairway and hit 9-iron to 12 feet left of the flag for birdie. Two holes later, his tee shot didn't quite clear the left bunker and left Lowry with a tough lie in the thick grass of the collar of the bunker. His deft wedge rolled to 7 feet for a birdie, and a par ended a beautiful morning. He had almost seven hours before he teed off in the final round.

Lowry's two birdies also made it tougher on Jason Day, the world's No. 1 player who scratched back into the mix after an opening 76. Day had a 69-66 on Saturday in the second and third rounds and at one point got within four shots of the lead. Now he is eight shots back.

Sergio Garcia had two straight bogeys from the bunker and shot 72. He was at even-par 210, along with Scott Piercy, who also had a 72.

Johnson knows from experience how quickly a lead can disappear in the U.S. Open. He was three shots clear going into the final round at Pebble Beach in 2010, and it disappeared with one funky lie that led to triple bogey on the second hole. Johnson shot 82 that day, the start of his heartache in the majors.

There was the two-shot penalty at Whistling Straits in the 2010 PGA Championship when he grounded his club in sand without realizing it was one of the 1,000 bunkers. He hit a 2-iron out of bounds at Royal St. Georges in the 2011 Open when he was chasing down Darren Clarke. Last year at Chambers Bay in the U.S. Open, he was 12 feet away from winning and three-putted to finish one behind Jordan Spieth.

Johnson started the third round with a one-shot lead. He ended it four shots behind. But he was still in the game.

"I know I'm four back, but with this golf course, that can change in a hurry," he said. "I'm going to have to play a good, solid round of golf, though."

Spieth wasted a good start to his third round and had to settle for a 70, leaving him 11 shots behind. It's the first time since the 2014 PGA Championship that Spieth is not within at least two shots of the lead going into the final round of a major.