Sizing up the standings at Memorial Day checkpoint 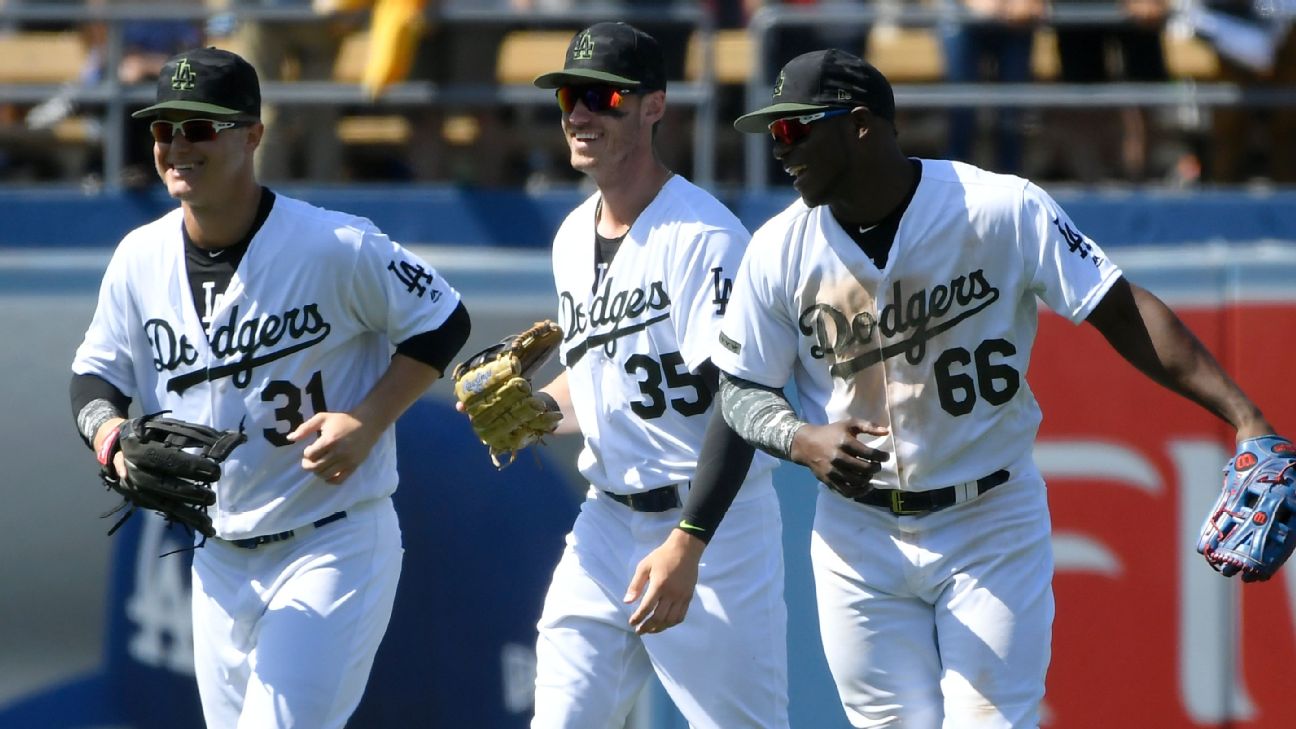 The old saying in baseball is that you shouldn't check the standings until Memorial Day. Well, with Memorial Day behind us, we figured it was time to assess how the divisions stack up and what stands out at the first unofficial checkpoint of the season. We asked ESPN.com's Bradford Doolittle, David Schoenfield and Sam Miller to weigh in.

1. What's the first thing that jumps out to you when you look at the standings right now?

Bradford Doolittle: Polarity. I'm always looking at things prorated out to 162 games, and early in every season, you're used to seeing extreme numbers that invariably regress. But to reach Memorial Day with so many teams that have run differentials that profile to either 100 wins or 100 losses is stunning. I still expect regression, but there's no doubt that baseball is on the far end of the stratification scale right now.

Sam Miller: The first thing is that there are only five teams in the National League under .500. That's incredible for at least three reasons: The first is that, after two decades of getting destroyed in interleague play, the National League has nearly a .600 winning percentage over the American League so far; perhaps it's an early-season fluke, but it going to be fun to keep an eye on. The second is that the sorting of the league into "trying" and "not trying" teams is really gutting the bottom of the standings, and we might end up with five 100-loss teams in the majors. And the third is that it just looks so weird --and if you start gaming out pennant races from this group, so promising.

2. Which team is headed for a big rise or drop in the standings?

Doolittle: The consistency of the Cubs' starting pitching has held them back so far, but that team is a powerhouse. They'll catch fire at some point and take control of the NL Central. At the other end of things, if Colorado's starting pitching begins to fray at all, there isn't enough other good stuff going on with that team to sustain contention. They are in the bottom eight by bWAR at six positions on the field and have the run differential of a 70-win team.

Miller: The playoff odds systems still aren't very high on the Braves -- at Fangraphs they're only 1-in-4 to make the playoffs, despite having the NL's second-best record through Sunday -- and I'm inclined to nod. It's not hard to imagine every regular in their lineup -- literally every one! -- hitting worse in the second half than they have so far. A drop is no sure thing, but this probably isn't actually the best offense in the NL.

Schoenfield: The Pirates have hung close in a tough NL Central, but this recent skid (2-8 in their past 10 games) indicates they might be more of a .500 team than a legitimate playoff contender.

3. The Red Sox, Yankees and Astros own the three best records in baseball. Do you consider it those three teams and then everybody else, or would you put other teams in that top tier?

Doolittle: There is a pretty clear separation for those teams, not just because of their records and run differentials, but also because of how those things have dovetailed with preseason forecasts. However, I'd be tempted to put Houston on its own tier. Their record (a 106-win pace) doesn't reflect just how dominant the Astros have been. They are on track to outscore their opponents by 389 runs. That would be the second-highest differential ever, behind the 1939 Yankees.

Miller: Only two months ago we were sure that the Cubs, Dodgers and Indians all belonged in that top tier with Houston and New York, so I wouldn't dare to predict who we'll think will be in that tier two months from now. The Cubs and Indians, in particular, look well-rounded, postseason-ready and capable of a 20-win month this summer.

Schoenfield: The Brewers are right with Houston in winning percentage, but I do think it's those three teams, then a gap to the next tier. Maybe one of the NL teams separates itself from the pack -- the Nationals have the talent, if they can ever get everybody on the field at the same time -- but those three AL teams look like the three best teams in baseball.

4. The Brewers, Braves and Phillies own three of the NL's best records. How many of them will reach the playoffs?

Doolittle: One. Even if (when) the Nationals, Cubs and Dodgers ascend to first place, each member of the surprise-teams trio looks well-positioned to contend for the wild-card game. However, I think the Cardinals have their best baseball ahead of them and will end up hosting that game. My preseason pick for the second wild-card spot was the Phillies, and they still are looking good. But at this point, I'd have to take the Brewers -- who maybe should not be referred to as a surprise in the first place -- if only because they went through it last season. But I don't think any of these "surprise" teams are flukes.

Miller: At FanGraphs, the combined playoff odds for all three is slightly below 100 percent; at Baseball Prospectus, a bit above 100 percent. For the moment, I'm sticking with the Nationals and Cubs above all three of them, and with 10 NL teams with winning records (!), the wild card is going to be a hike. The answer is one.

Schoenfield: Is 1.5 an answer? I'll still go with the Nationals and Cubs to win their division titles, leaving those three teams scrambling for a wild card. Maybe this is the year we get that dream scenario of a five-way tie for the second wild card.

5. Which team is the biggest disappointment to you so far? (And will that team turn it around?)

Doolittle: The Dodgers are an easy pick here, but I do think they will turn it around. As it is, they've endured more injuries than anyone and, fortuitously, still are a short win streak away from the division lead. Obviously, they won't get Corey Seager back, but L.A. should get healthier overall. And a number of their underachievers will regress in the good way;Kenley Jansen already has.

Miller: Probably the Blue Jays, solely because every day I look at their lineup and am disappointed that "Guerrero" isn't in it. In the standings, though: Just nine months ago, the Dodgers had a real argument for being one of the half-dozen best teams of all time. They have almost all the same players -- and added pitching phenom Walker Buehler-- and now they're just bad. It's not all their fault -- some bad luck, some bad injuries -- but this looks like a club that might have an All-Star only because the rules require every team be represented. That's insane.

Schoenfield: The Dodgers. And sure, they've played below their Pythagorean record and their BaseRuns record (basically, they haven't been clutch), and the NL West is mediocre. They need Clayton Kershaw back, but this division could be had with only 86 or 87 wins.

6. Which team is the biggest positive surprise so far? (And can that team keep it up?)

Doolittle: I'm going out of the box with this one and saying the Astros. I had them forecast to win 100 games, and yet they have improved their projection since the preseason more than any other team. And the bullpen hasn't even been that great so far, and some of their key offensive players -- Jose Altuve, Carlos Correa,Yuli Gurriel-- have not quite found their level. It's a scary team.

Miller: There's a pretty good chance that 84 wins is going to win an AL wild-card spot, especially if the Angels' injury-prone pitching staff gets hit with an injury or two. I keep looking at the A's so far and I can't figure out a reason why it can't be them.

Schoenfield: The Mariners, especially given the Robinson Cano suspension, plus mediocre starts from Kyle Seager and Nelson Cruz, plus Felix Hernandez sitting there with a 5.58 ERA. They keeping finding ways to win close games (15-8 in one-run games and 5-0 in extra innings), and maybe this will be one of those years where everything goes their way. On the other hand, their rotation is thin, the outfield lacks power other than Mitch Haniger, and they have 31 games left against the Astros and Angels (and haven't played the Red Sox or Yankees).

7. How many teams will finish the season with 100 wins?

Doolittle: Three -- the Yankees, Red Sox and Astros. The Cubs' slowish start has lasted long enough that they won't get there.

Miller: Two -- the Yankees and Astros.

8. How many teams will finish the season with 100 losses?

Doolittle: Three -- the Royals, Orioles and Marlins. I think the White Sox, Reds and Rangers are all a little better than they've shown so far. Chicago, in particular, should get better as the season goes along, if they can start transitioning some of their starting pitchers from the minors, which likely would have the ancillary effect of moving some needed arms to the bullpen. And the offense should get an eventual boost from the promotion of Eloy Jimenez.

9. What will the Dodgers' final record be?

Doolittle: Let's say 89-73. Once the pitching staff gets healthy, the run prevention should remain elite. I do worry about the sluggish offense, because it's certainly possible that last year's breakout from Chris Taylor was a one-off deal, and it will be hard for Matt Kemp and Yasmani Grandal to sustain their level of play from the first two months. With Seager out, I think L.A. will need to find an impact bat from outside the organization. The Jose Abreu idea I've seen floated seems ideal.

Miller: FanGraphs has them finishing with 86 wins. Baseball Prospectus says 84. I'll be goofy and say 89.

10. Quick predictions reset: Give us your division winners and wild cards based on what you've seen this season.

Doolittle: Yankees, Indians, Astros, Nationals, Cubs, Dodgers as division winners, which, I know, is boring as hell. Red Sox, Angels, Cardinals and Brewers as wild cards. However, if there is one team not currently on the contention radar that I'd keep an eye on, it's the Athletics. 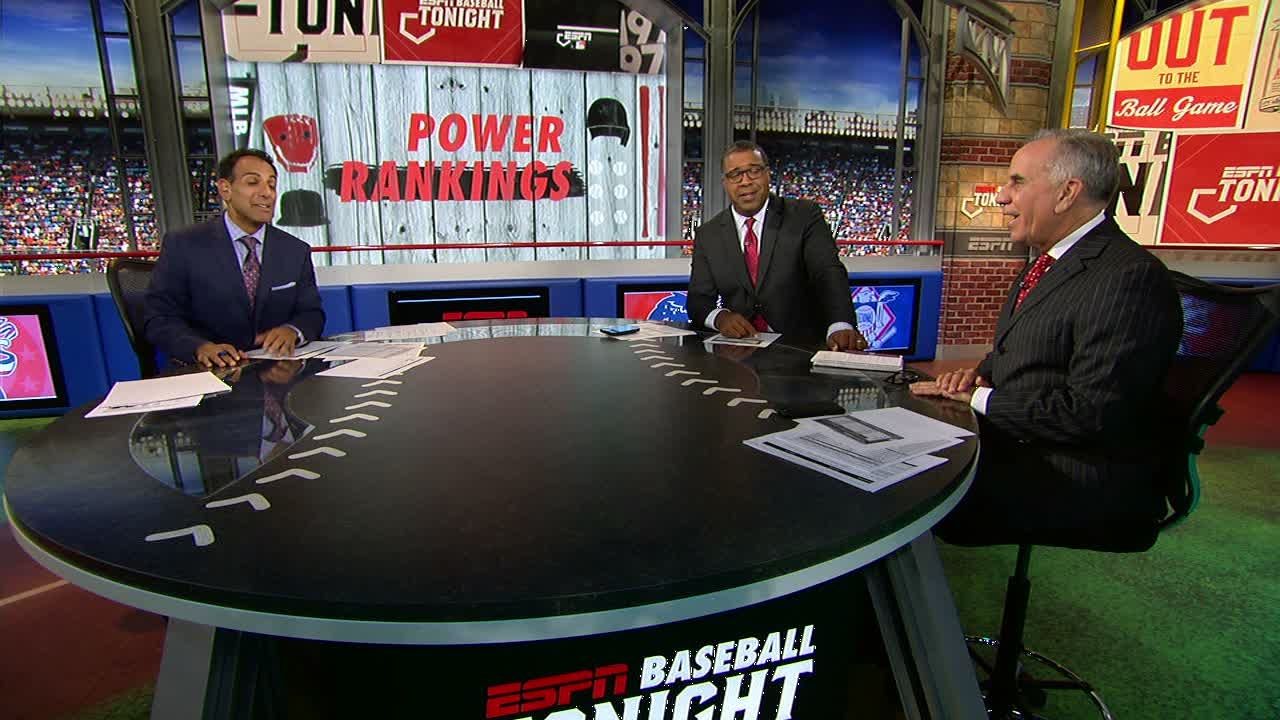