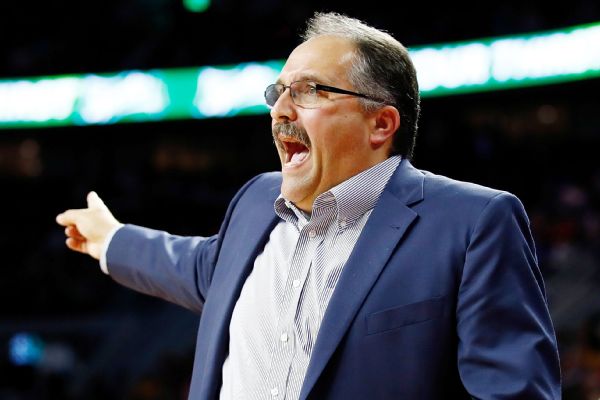 Van Gundy confirmed an ESPN.com report that the Pistons and Timberwolves had discussed a multiplayer deal headlined by Jackson and point guardRicky Rubio this week, but he revealed Saturday morning that he has assured Jackson the deal would not happen.

"I texted Reggie and just said, 'This is crazy season, and we're not trading you for Ricky Rubio,'" Van Gundy told reporters after the Pistons' morning shootaround in advance of their Saturday night home game against Washington.

"That was it. I don't normally address it, but the fact that it was out there and it concerned his agent [Aaron Mintz] enough to call, I addressed it.

"I'm not denying that the discussion took place -- they take place all the time. But that's a lot different than consideration. And clearly we didn't make that move."

The Wolves, sources say, are actively shopping Rubio and have tried to engage numerous teams about a potential deal involving him. Sources say Minnesota is attaching swingman Shabazz Muhammad to offers in hopes of enticing a team to take on Rubio, who has two seasons and just over $29 million left on his current contract.

Although Minnesota is bringing rookie Kris Dunn along slowly this season, Dunn is regarded as the Wolves' point guard of the future, which has led to Rubio's availability.

Jackson, meanwhile, has been the subject of considerable trade speculation in recent weeks in the wake of Detroit's disappointing 20-23 start.

In the second year of a five-year, $80 million deal, Jackson is averaging 16.7 points and 5.3 assists in 23 games. But the Pistons are 9-14 in those games, compared to an 11-10 start when Jackson was out to start the season, recuperating from persistent knee tendonitis.

ESPN.com reported Friday night that Minnesota and Detroit -- while no deal appeared imminent -- had engaged in talks this week on a potential multiplayer swap involving Rubio, Muhammad and Jackson.