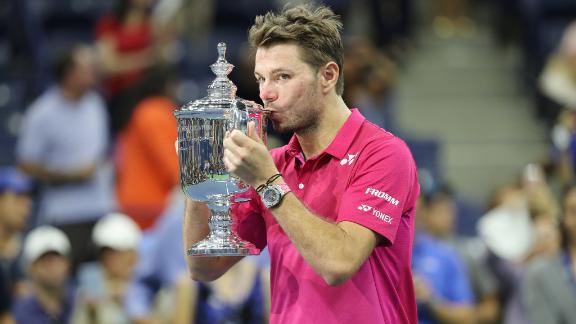 NEW YORK -- Stan Wawrinka is the first to acknowledge he hasn't always been the most consistent player -- or the strongest mentally. That's why when he shows his mettle during a match he likes to point his right index finger to his temple.

That signature gesture got a lot of use in the US Open final Sunday, when Wawrinka surprisingly managed to wear down Novak Djokovic and beat the defending champion 6-7 (1), 6-4, 7-5, 6-3 for his first US Open title and third Grand Slam trophy overall.

"He was the better player. He was tougher mentally," said Djokovic, offering two of the highest compliments a tennis player can receive from the talented Serb ranked No. 1. "He knew what to do. And I was just unlucky in some moments. And that's it."

The 31-year-old Wawrinka is the oldest US Open men's champion since Ken Rosewall won in 1970 at age 35. Wawrinka entered Sunday having spent almost exactly twice as much time on court as Djokovic during the course of the tournament: about 18 hours versus about nine hours.

"I played quite a lot of tennis these two weeks. I am completely empty," said No. 3 Wawrinka, who noted during the trophy ceremony that Sunday was the 15th anniversary of the 9/11 terrorist attacks.

The Swiss player said in his postmatch news conference that before the final he was "really nervous like never before. I was shaking in the locker. When [coach Magnus Norman and I] start five minutes before the match talking ... I start to cry. I was completely shaking."

Asked what he did to quell his nerves, Wawrinka replied with a smile: "I had to put my s--- together. Sorry. That's how I say it."

By breaking in the final game of the second and third sets and saving 14 of 17 break points he faced, Wawrinka had gained the upper hand by the time Djokovic clutched at his left leg and grimaced after missing a forehand while being broken early in the fourth.

Djokovic was granted the unusual chance to have a medical timeout at a time other than a changeover. He removed both shoes and socks so a trainer could help with toe blisters. Wawrinka complained about the six-minute break, and Djokovic looked over and apologized. Later, Djokovic started limping and received more treatment.

"We played almost four hours," said Djokovic, "and I think I can speak in the name of Stan as well: We both felt it."

"As I said the other day, you have to accept to suffer and you have almost to enjoy to suffer," he said. "Because I think this Grand Slam was the most painful, physically and mentally, Grand Slam that I ever played."

Wawrinka has won only five of his 24 career meetings against Djokovic, but he now has beaten the 12-time major champion on the way to each of his Grand Slam titles, including in the 2014 Australian Open quarterfinals and 2015 French Open final.

Before this matchup, Djokovic praised Wawrinka as a "big-match player." He wasn't always, though. Playing in the shadow of his more accomplished Swiss countryman and good pal, Roger Federer, Wawrinka didn't reach the semifinals at a major until his 35th appearance -- at age 28.

But look at Wawrinka now.

He has won 11 tournament finals in a row.

He is 3-0 in Grand Slam finals, beating the No. 1-ranked player each time. Take that trio of highest-stakes matches out of the equation and Wawrinka is 0-19 in all other matches against the top man.

And he did it Sunday by coming back against Djokovic, whose French Open title in June completed a career Grand Slam and made him only the third man -- and first in almost a half-century -- to win four consecutive major tournaments.

Djokovic had been 51-0 in US Open matches when taking the first set. This time, though, the thick-chested Wawrinka eventually began bullying Djokovic from the baseline, not only with his best-in-the-game one-handed backhand but also off both wings.

"He likes to occasionally whack the ball quite hard, and I don't think that Novak likes that," said Norman. "Stan is maybe one of the few guys who can really hit through Novak if he has a good day."

As Wawrinka placed one stinging shot after another right on a line, Djokovic looked up at coach Boris Becker while gesticulating with his hands and muttering. He went from appearing locked-in at the outset to completely drained in every way.

"I lost my nerves in the important moments. He kept his cool. I think that's what decided the match,'' Djokovic said. "I guess sometimes it happens, even though you have the experience and know what to do. Just the heat of the moment and importance of the match, I guess, was too strong for me at certain periods of the match. Just if you lose your cool, the match can go away."

On one point, Wawrinka delivered a shot so hard it knocked the racket from Djokovic's grasp and against a wall behind the baseline.

Then, after smacking a forehand winner to end a 20-stroke exchange, Wawrinka pointed to his temple. Two points later, the second set was his.

After a forehand passing shot drew an errant volley for a break early in the third set, Wawrinka pointed to his temple.

Wawrinka nearly was gone before the end of the US Open's first week, one point from losing in the third round against 64th-ranked Dan Evans. Sunday's victory made Wawrinka the first man to win the tournament after saving a match point since -- that's right -- Djokovic in 2011.

"You're a great champion, a great person. Because of you, I am where I am today," Wawrinka said. "We know each other [for] many, many years, and I had the chance to practice many times with him and to play him on a big stage."

With that, Djokovic threw his left arm around Wawrinka's shoulders, knowing he was more up to the task on this day.

"Winning two out of four Grand Slams is a pretty good year, and playing another final -- I have no complaints," Djokovic said. "Obviously, I wish that I could win another title, but this is what it is. You have to shake hands and accept the loss from a better player and move on.

"It's not the first time, it's not the last time I'm going to lose a match. Big match," he continued. "Hopefully I can learn from it. Hopefully I can get better, because that's the cycle of life, I guess, for us athletes." 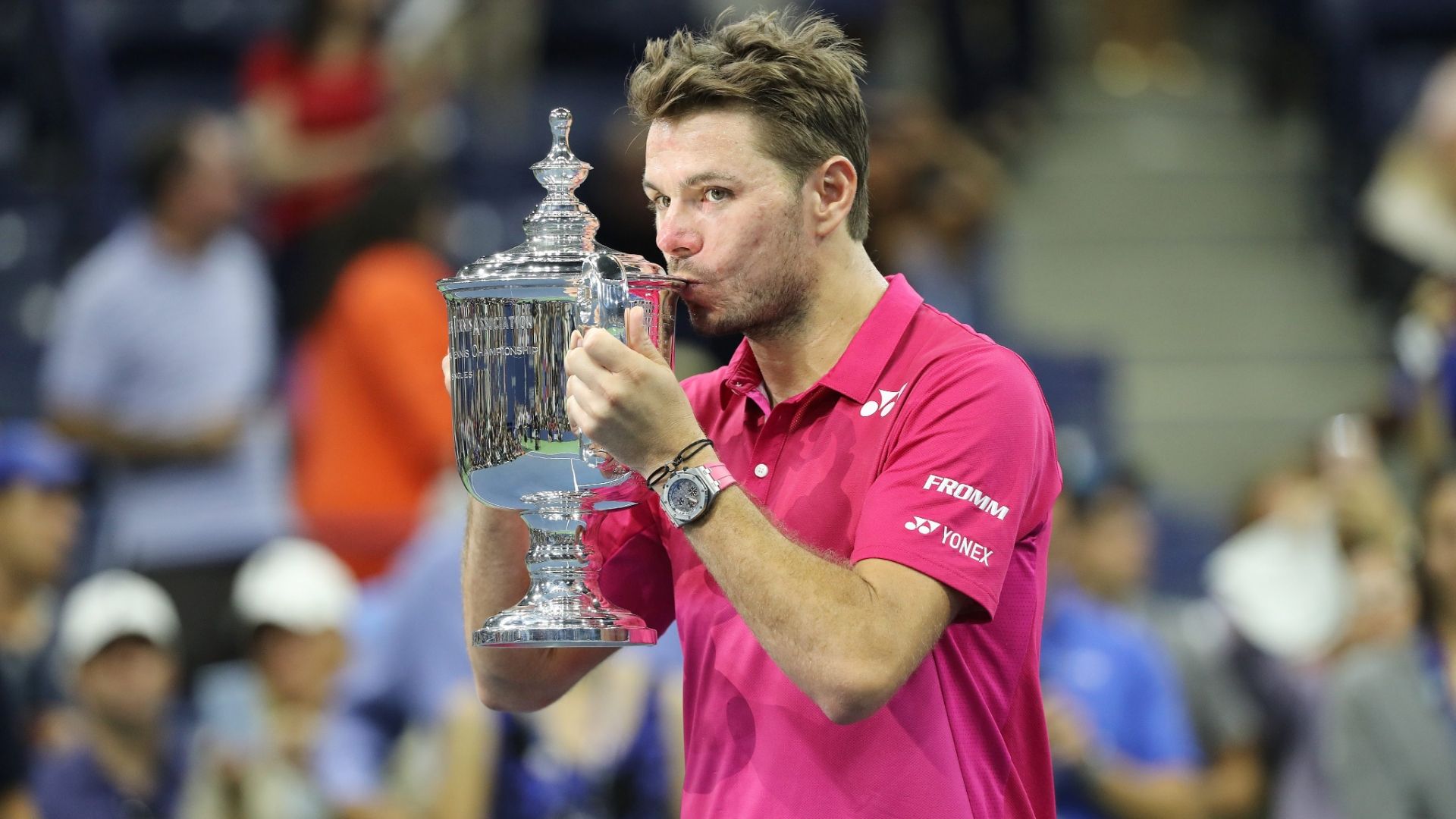 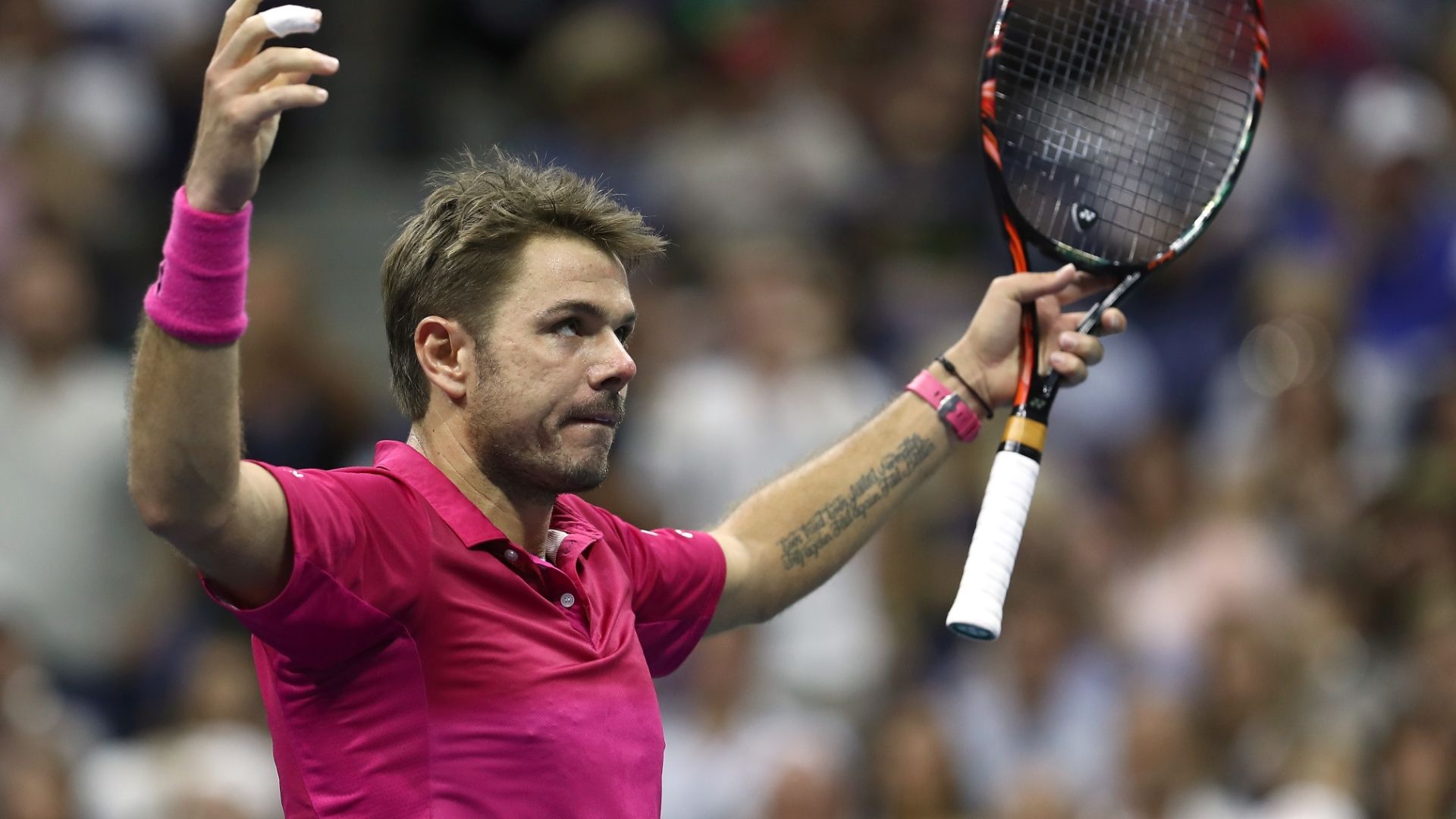 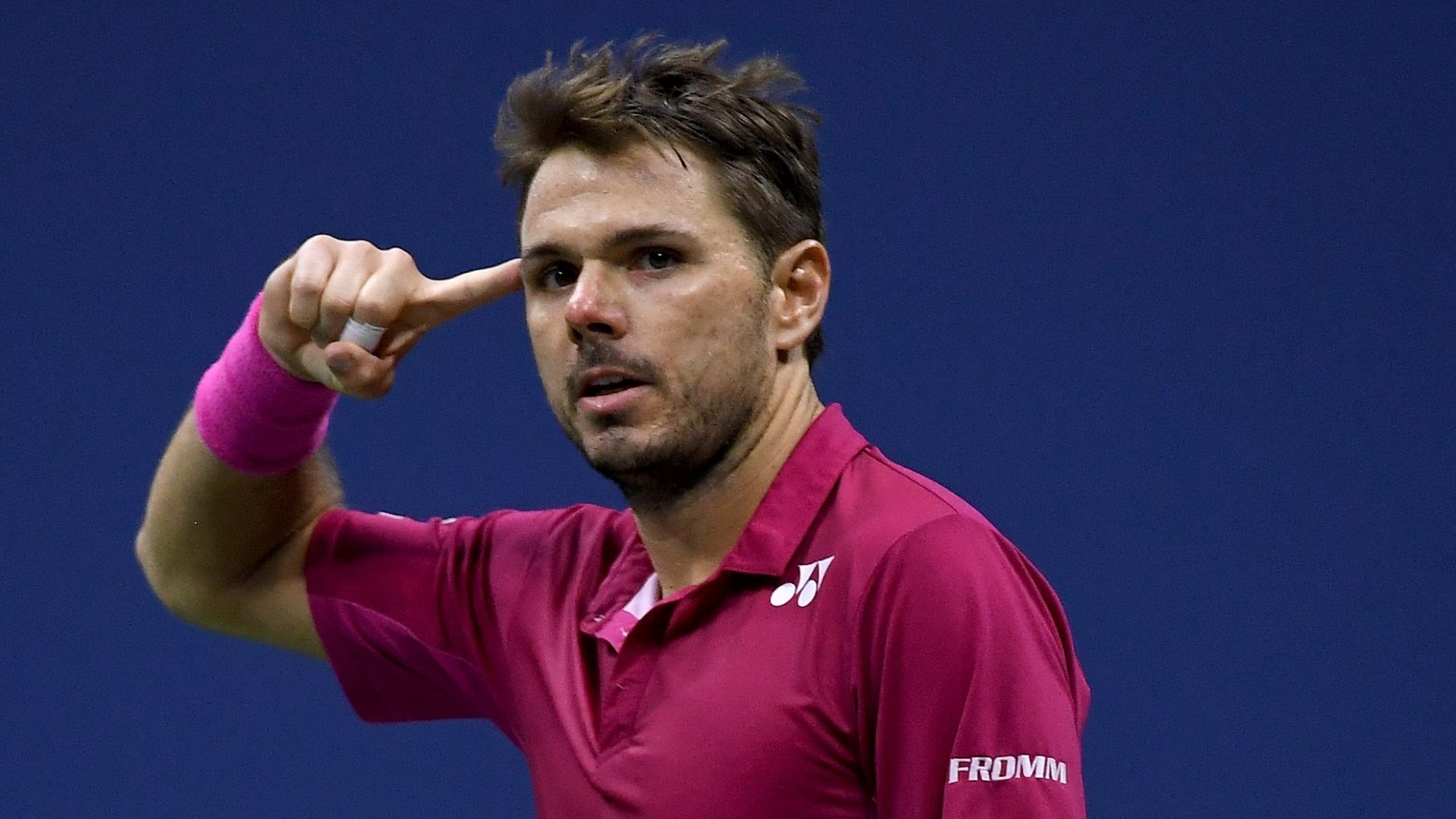 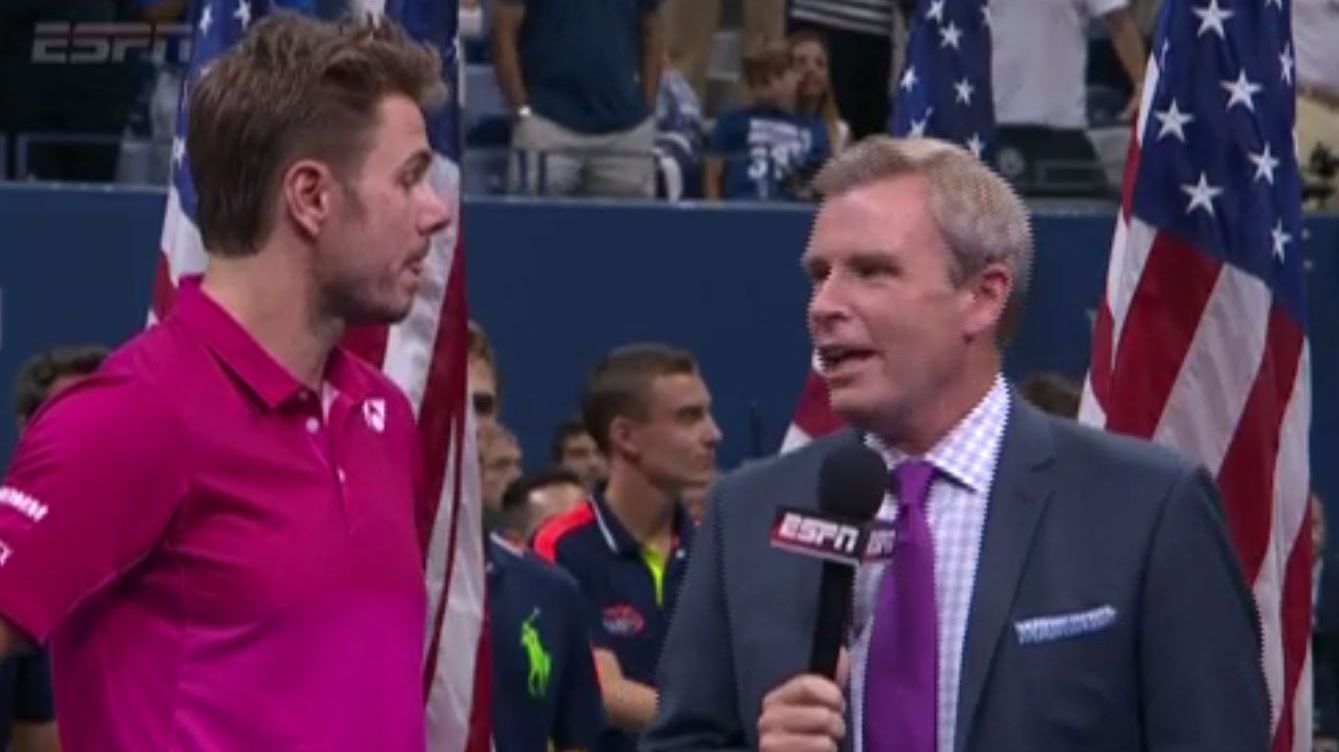