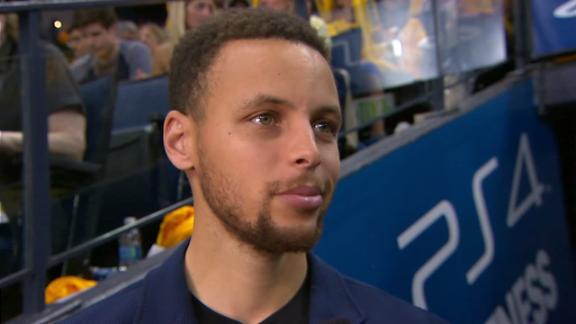 Stephen Curryhas resumed light shooting without movement on his injured right knee, with the hope that he can get into scrimmages by the end of the week, perhaps in time to be ready for Game 3 of the Golden State Warriors' Western Conference semifinal series against Portland.

And during a sideline interview with ESPN's Lisa Salters during Sunday's Game 1 win against Portland, Curry said the chances of him returning for Game 3 are "pretty good."

"To me they're pretty good so I'll do anything I can this week to make that happen," Curry said.

Coach Steve Kerr said earlier Sunday that the odds that the reigning MVP would be ready for Game 2 on Tuesday at Oracle Arena are "pretty slim."

"It just depends how his week goes," Kerr said of Curry's status for Game 3. "We'll just monitor him and see how it goes and hopefully get him back at some point. It's nice to have that long break between 2 and 3."

Curry sprained the MCL when he slipped on a wet spot just before halftime of a win at Houston in Game 4 of the first round. He said Friday that he hoped to do some shooting within a day or two. That happened Saturday. Curry will have to test the knee by putting pressure on it and planting on it when he shoots and then in some 5-on-5 scrimmages.

The Warriors are scheduled to take Wednesday off from practice, which means Curry could get into running on the court by Thursday or Friday. After his MRI exam on Monday, general manager Bob Myers estimated that the point guard would be sidelined for two weeks, based on other players with similar injuries.

"I'm doing a lot more rehab-wise, trying to test my body out a little bit," Curry told Salters. "I'm looking forward to getting back on the court, maybe a practice setting and see how it feels.

"I've gotten pretty much my full range of motion back. It's still painful but for the most part I can get on my feet and try to do basketball activities that will get me back into the playoff atmosphere."

Portland's job in the best-of-seven series against the defending champions doesn't get much easier without Curry.

"They're a great team without Steph. They're a historically great team with him," Blazers coach Terry Stotts said before the game. "They have a style of play. They have an identity. Everybody understands their roles. They do what they do well. They're an exceptional team with Steph and what he can bring to the table, but I think the last six quarters showed how good they are without him as well."

Curry, of course, wants to shorten his time on the bench. He said Friday that he knows he won't be 100 percent when he returns.

"It's all speculation," Kerr said. "As Bob said from the beginning, the two-week timetable was just kind of a random guess more than anything, based on past history of these MCL injuries. So we don't really know, but that's the hope -- that by the middle of next week, we'll get him back in more basketball-type movements."

For now, Curry, with a league-best 30.1 points per game, is enjoying watching his teammates succeed.

"I had the utmost faith and confidence in the 14 other guys on this team to go out and show who they are and what they're capable of, and they've obviously done that," Curry said. "I only played 38 minutes in the first round, and we finished it in five. They're a very capable group without me. Obviously, I'd like to be out there with them, and I feel like we're a better team when I'm out there, but the way that they play and the way they have that confidence and swagger about them, it's fun to watch. We're going to need that, the same energy, focus and confidence, going forward to start this next round."