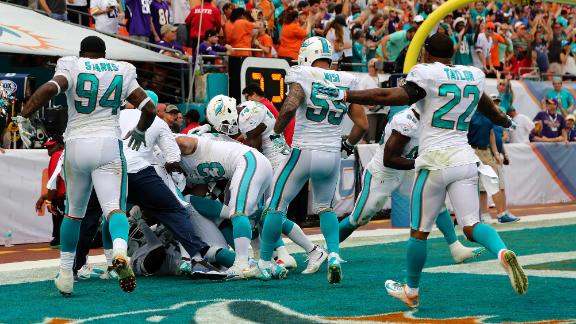 "It's frustrating that we didn't make the playoffs. I feel as bad as everybody," Ross said. "But I think we're building something here, and I believe in the coach."

There was plenty of speculation about Philbin's job security entering the week. But the Dolphins continued to play hard and improved to 8-7. Philbin has a chance to post his first winning season with a victory against the New York Jets next week.

In fact, Ross said he made up his mind before Sunday's victory over Minnesota. Unlike many owners in the NFL, Ross is preaching patience. The decision guarantees Philbin will coach out the entirety of his four-year contract.

"Things are happening as an organization. I think everyone feels the buzz that things are changing around here," Ross said. "They say patience is a virtue, you know. But I'm expecting big things next year -- I will tell you that."

Players in the locker room, including Dolphins captain Cameron Wake, had a positive reaction to Philbin returning next season.

"Coach Philbin is a big part of this franchise," Wake said. "He's obviously part of the success of this team. That's great news and I'm looking forward to it."

Ross hired Philbin in January 2012 in hopes of finding "the next Don Shula," according to Ross. That wasn't the case, as Philbin struggled with inconsistency and in-game decision-making. He is 23-24 in three seasons in Miami.

Philbin also came under fire during the 2013 season for not being aware of the bullying scandal within his locker room involving former Dolphins players Jonathan Martin and Richie Incognito. Philbin admitted his shortcomings and made an effort to be more in tune with his players this past season.

Philbin was a nine-year assistant in the NFL before coming to Miami. He most recently was the offensive coordinator of the Green Bay Packers from 2007-2011.

Late Safety Lifts Dolphins
Terrence Fede blocked a punt for a safety in the final minute of the fourth quarter to give Miami a 37-35 win over Minnesota.