The fantasy football impact of LeGarrette Blount signing with the Eagles 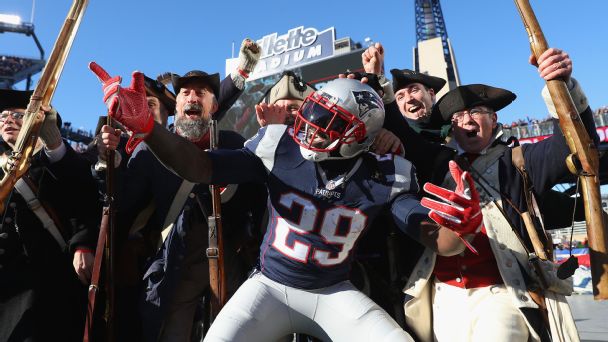 The Eagles came out of April's draft with one of the league's biggest holes at the tailback position. They addressed the void on Wednesday by signing LeGarrette Blount to a one-year deal.

Blount joins the Eagles after rushing for an NFL-high 18 touchdowns last year. He ranked second in carries (299), a league-high 24 of which came inside the opponent's 5-yard line. Blount averaged 3.9 yards per carry, which comes in below league average, but that number is driven down a bit by the fact that he faced a league-high average of 8.3 defenders in the box. Blount had averaged at least 4.3 YPC during his previous three seasons. Similarly, Blount averaged a pedestrian 1.7 yards after contact last year, but topped the entire NFL at 2.27 during the 2013-15 seasons.

Blount has obviously performed well as a rusher, but offers very little as a pass catcher. In fact, he's registered 1,168 regular season carries, but only 46 receptions in his career. Last year, the Patriots called pass on an extraordinarily low 36 percent of Blount's snaps. That helps explain why he was limited to seven receptions for 38 yards on eight targets.

Blount is now 30 years old, but has missed only four games during the past four seasons. He should have plenty of tread left on his tires considering he averaged only 144.8 carries per season during his first six years in the league.

Blount joins an Eagles roster that includes 33-year-old passing-game specialist Darren Sproles, fourth-round rookie scat back Donnel Pumphrey and second-year change-of-pace back Wendell Smallwood. Blount fits on the depth chart perfectly as the likely early-down and goal-line hammer. Sproles will still get his five to seven carries per game, leaving the scraps for Pumphrey and Smallwood. Sproles will be extremely busy when the Eagles are passing, but Pumphrey could chip in here, as well.

Here are my early projections for the Eagles backfield:

Philadelphia quietly sports one of the league's best teams on paper. The defense is terrific (aside from the cornerback position) and the offense is much improved following the additions of Blount, Pumphrey, Alshon Jeffery and Torrey Smith to a unit that also includes Sproles, Jordan Matthews and Zach Ertz. Carson Wentz, meanwhile, is entering his second year after a promising rookie campaign, and will be protected by one of the league's best and deepest offensive lines.