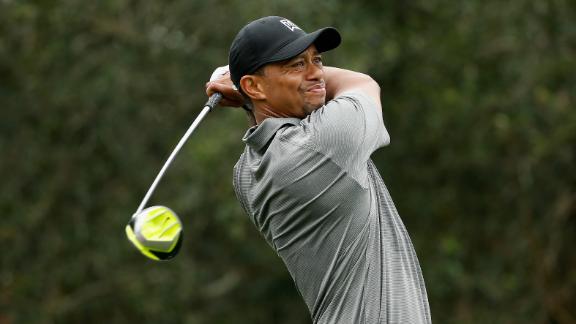 WINDERMERE, Fla. -- He witnessed his playing competitor beat him by seven strokes, didn't move up the leaderboard and faces another first-off tee time at his annual charity tournament.

But Tiger Woods found plenty else to be pleased about Friday at Isleworth, despite his standing in the Hero World Challenge.

Playing just his second competitive round in four months following another injury setback, Woods improved on his opening-round 77 to shoot 2-under-par 70. The round included his first eagle of 2014 but was tempered by a double-bogey at the final hole.

"I really didn't feel that much different than yesterday,'' said Woods, who battled a cough and a 100-degree fever throughout the round. "I hit probably two less worse shots than I did yesterday, but I struck the ball solid yesterday and I did again today. I think obviously I hit them a little bit closer today and made a couple putts.''

Woods' front-nine score of 36 was 5 better compared to his opening round but looked poor when compared to Patrick Reed, who made five birdies and an eagle to shoot 29 -- seven strokes better.

Reed birdied the 10th hole to go 8 under for his round but cooled off somewhat. He still finished with an impressive 63 to move into contention, three strokes behind leader Jordan Spieth.

Spieth led by two over Henrik Stenson. He chose not to finish the 18th hole as darkness set in.

Woods is far from contending -- 14 strokes back of Spieth through 36 holes when he finished -- but given his lack of golf going back to the PGA Championship and his change in coaches from Sean Foley to Chris Como, an adjustment period should be expected.

So far, the long game has shown improvement, with a swing that appears more upright and natural. Woods said he studied his golf swing going back to his youth and has tried to recapture some of that while regaining some power.

The work in progress remains his short game, a good example occurring at the par-4 eighth hole Friday. It was his only bogey on the front side, but it was an ugly one, with a wedge-shot approach to the green coming up several yards short, followed by a bladed chip shot that went 40 feet past the pin. A day earlier, Woods chunked chip shots four times, so a natural compensation might be what occurred on the eighth hole.

He did get up and down for par on three other occasions on the front side, including after hitting his tee shot in the water at the seventh hole.

Once he got to the back nine, Woods settled in nicely. He didn't miss a green until the 18th hole -- and that came after a lengthy rain delay -- made an eagle at the 13th and birdies at the 14th and 16th, lipping out for another at the 17th, and shot 4-under 32.

One of Woods' former coaches was impressed. Hank Haney took to Twitter to answer questions and one follow wondered if he thought Woods' swing was better.

Woods did win nine times under Foley from 2011 to '13, but he acknowledged on Tuesday that despite that success, things were different in the last year as he battled the back problems that led to surgery on March 31.

"I think that physically, I just wasn't able to do some of the things that we wanted to do in the golf swing,'' he said. "On a professional level, I think I needed to go in a different direction.''

And in the past, those changes have taken time. Woods famously underwent an overhaul after winning the 1997 Masters by 12 strokes under then-coach Butch Harmon. When he went to Haney in 2004, he was in the midst of a one-victory season, but then won six majors and 31 PGA Tour events from 2005 through '09.

The transition to Foley in 2010 also came with injuries that cost him two major championships in 2011, but Woods won nine times through 2013.

Woods is playing for just the ninth time worldwide this year and only the fifth tournament since March. But he expects this process to take less time.

Still, there are growing pains, especially in the short game. It cost him a bogey at the eighth and two poor shots at the 18th meant a double.

"It's not very good,'' he said of his short game. "That's also part of going through the swing changes. Chip shot is a smaller version, so this is a different pattern than I have been using and it's showing up. It's not quite ready yet. Just going to take more time, more practice."

He's in last place, but Woods at least has two more rounds to work on his game.

Tiger Woods Rebounds With 70
Tiger Woods is in 18th place after round 2 of the Hero World Challenge.

Breaking Down Tiger's 2nd Round
Bob Harig and Mark Schwarz discuss Tiger Woods' second round at the Hero World Challenge.