Timeline: The events leading up to the Big Ten's decision to play football this fall 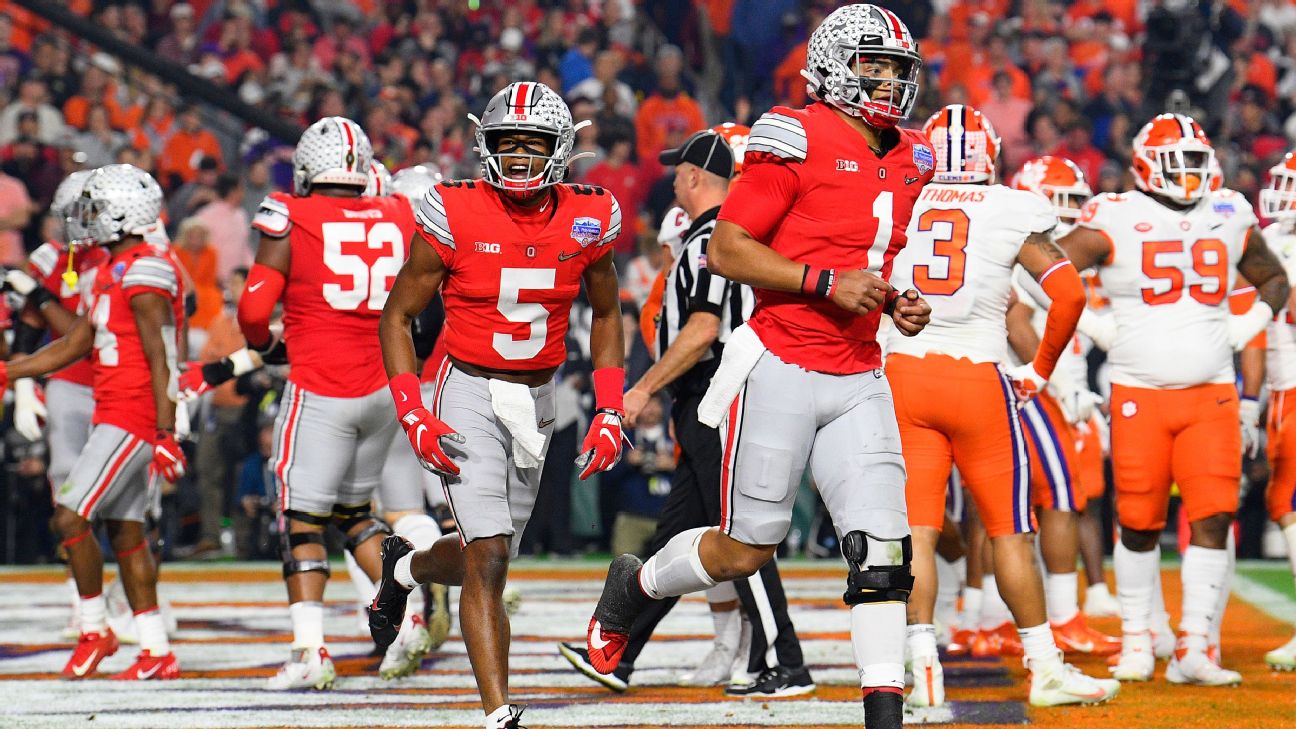 The Big Ten announced Wednesday it would begin the football season the weekend of Oct. 23-24, after more than a month of intraconference squabbling, protests, petitions and lawsuits to try to get the league to reconsider its original postponement.

It has been a long and wild course to get to this point. So much has happened since the initial decision that it's easy to forget how the conference arrived at this point.


Here is a timeline from start to finish of what the Big Ten has gone through since August to bring back football this fall:

The Big Ten initially revised its schedule for conference-only games that were to start Sept. 3, with the final matchups Nov. 21. The Big Ten championship was set to remain on Dec. 5 when the full schedule was publicly released, with built-in bye weeks to help ease any issues with postponed games because of the coronavirus pandemic. Teams were allowed to open preseason camp Aug. 7, or earlier, depending on the date of their first game. Big Ten commissioner Kevin Warren did warn, however, that there was no guarantee sports would be played in the fall and that they were releasing the schedule for planning purposes.

Only six days after releasing the schedule, the school presidents and chancellors voted to postpone the season, as Warren had warned. At the time, Warren said the decision had to do with "where we are in our testing, where we are in our rapid testing, how is contact tracing actually defined?" Warren mentioned that caseloads had not decreased and that trends had not improved. The Pac-12 Conference followed suit on the same day, postponing the conference's fall sports as well.

Nebraska head coach Scott Frost had told reporters that the only reason his team would look at other options was if the Big Ten wasn't playing and a handful of teams from the Big Ten wanted to try to play. "I think we're prepared to look at any and all options," he said. Some took that to mean Nebraska would play outside the conference, to which the university president and chancellor released a statement on Aug. 13 saying, "The University of Nebraska-Lincoln is a fully committed member of the Big Ten conference."

Aug. 14: Big Ten parents speak out against the decision to postpone the season

Parents of players from Iowa, Ohio State and Penn State wrote and shared lettersdemanding answers from Warren. In the letters, the parents asked the conference what had changed over six days that resulted in postponing the season. "There is time to fix the wrongdoings and come out as leaders. We strongly encourage the Big Ten to reconsider playing the fall college football season, develop a plan of meaningful action and letting these young adults be included in the decision-making process," one letter said. The parents expressed concern over the lack of communication from Warren and the conference on why they made the decision.

Fields tweeted out a link to a public petition asking his followers to sign the online document. As of Sept. 16, the tweet has 18,500 retweets and the petition has 302,359 signatures. In the petition, Fields wrote, "We, the football players of the Big Ten, together with the fans and supporters of college football, request that the Big Ten conference immediately reinstate the 2020 football season." He went on to say the players and teams should be allowed to make their own choices about opting out of the season.

Despite the public backlash, Barbour told reporters, "The presidents and chancellors made their decision based on science, based on information from medical experts and based on concerns about uncertainty in a number of different categories." The university issued a statement later that day saying it backed the conference's decision to postpone the season.

Part of the frustration from coaches, players and parents was the lack of communication from Warren and that there had been little to no explanation of the decision-making process. Warren made his first public statements eight days after the announcement to postpone the season, saying, "The decision was thorough and deliberative, and based on sound feedback, guidance and advice from medical experts." He cited too much medical uncertainty and too many health risks regarding COVID-19 as reasons for the decision to postpone.

Still unhappy with the decision and the lack of communication, about 25 parents of Big Ten players from Ohio State, Iowa, Illinois and Wisconsin gathered in front of the Big Ten headquarters to protest the decisions by Warren and the conference. The protest was organized by Randy Wade, father of Ohio State defensive back Shaun Wade, who said, "We want to do everything we can to play in the fall. We don't like the way the decision went down by the presidents and not knowing whether they voted, didn't vote. We don't like that. Our kids wear Big Ten on every jersey. We represent the Big Ten."

The parents continued their push against the conference, this time uniting under the moniker of #B1GParentsUnited. Although parents from Nebraska, Ohio State, Iowa, Penn State and Michigan had already sent letters to Warren demanding more transparency and communication, the group sent another letter expressing "lack of confidence in [Warren's] ability to lead and communicate effectively with all key stakeholders." The letter demanded the conference produce documents, video records, communications and minutes of meetings.

The group of players filed a lawsuit against the Big Ten seeking to invalidate the league's postponement of the fall football season and to award damages. The suit alleged that the Big Ten was in breach of contract by not following its governing documents and that the athletes had "the right to expect the Big Ten will follow its governing documents and all of its other rules, regulations and guidelines; will not make arbitrary and capricious decisions; and when a vote on a decision as momentous as cancelling all fall sports is announced, will conduct an actual vote."

A White House representative reached out to Warren about having discussions concerning how the conference could return to playing football as soon as possible. Trump told reporters at the time, "We had a very good conversation, very productive, and maybe we'll be very nicely surprised. They had it closed up, and I think they'd like to see it open, along with a lot of other football that's being played right now." While Trump tweeted that the conference's plans to return were at the "one yard line," sources told ESPN that nothing had changed in terms of answering the Big Ten's medical questions and concerns.

Harbaugh joined parents of his players in Ann Arbor to march and protest the conference's decision. He told reporters at the event he had sent text messages and emails to Michigan president Mark Schlissel but had not talked to him about the postponement. Harbaugh also reiterated his desire to play, telling reporters, "We want to play as soon as we possibly can. And we're ready to play; we could be ready to play a game in two weeks."

Sept. 8: Politicians from six states ask the Big Ten to reconsider its decision


Political leaders from Michigan, Iowa, Minnesota, Ohio, Pennsylvania and Wisconsin signed a letter asking the conference to reconsidernot playing in the fall. The letter stated that recent actions taken by other conferences across the country to start football and other fall sports had "placed the Big Ten, its members and students at a disadvantage." The conference then issued a statement saying it wanted the same thing as the legislators, for sports to continue safely.

Sept. 10: Ryan Day issues a statement about his displeasure with the decision

The Ohio State coach continued to question the communication from the Big Ten since its decision to postpone nearly a month before. In his statement, Day said, "While I understand the Big Ten Conference's decision to postpone the football season because of health and safety considerations, the communication of information from the Big Ten following the decision has been disappointing and often unclear." He went on to say they still had an opportunity to play safely and still compete for a national championship this fall.

Peterson sent a letter to Warren questioning whether the league had "operated in compliance with Nebraska law," and requested all documents and information pertaining to its decision to postpone. Peterson alleged the conference was out of compliance with the Nebraska Nonprofit Corporation Act that says all nonprofits are expected to register within the states they want to conduct business. He went on to allege the Big Ten is operating and conducting business within the state of Nebraska "and/or failing to maintain registration" in the state. Nonprofits doing business in the state that do not register face enforcement action by the attorney general's office.

The medical subcommittee presented new testing programs on Sept. 12, and the presidents, chancellors and the Big Ten'sreturn-to-competition task force met Sunday to discuss the information. The meeting was an opportunity for all three of the task force's subcommittees -- medical, TV and football scheduling -- to present their plans to all 14 presidents and chancellors. That meeting did not end in a vote but was a major step in bringing back the season.

True to form in how this process has gone for the Big Ten, and only two days after the presidents and chancellors met, University of Nebraska system president Ted Carter was caught on a hot microphone saying the conference's decision to reinstate the season would come later Tuesday. Carter was speaking to Bob Hinson, director of the National Strategic Research Institute, before a news conference Tuesday in Lincoln, Nebraska.

Sept. 16: The Big Ten announces it will begin the season starting the weekend of Oct. 23-24

The conference announced a new daily rapid testing program that is set to begin Sept. 30 on all 14 campuses. With the return to play, the conference is adopting significant medical protocols, including daily antigen testing, enhanced cardiac screening and an enhanced data-driven approach when making decisions about practice/competition. 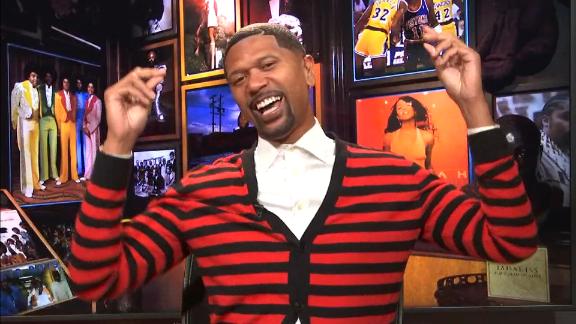 Jalen so happy about the return of Big Ten football he has to dance
Jalen Rose does a little dance to celebrate the Big Ten's plan to start its football season in October. 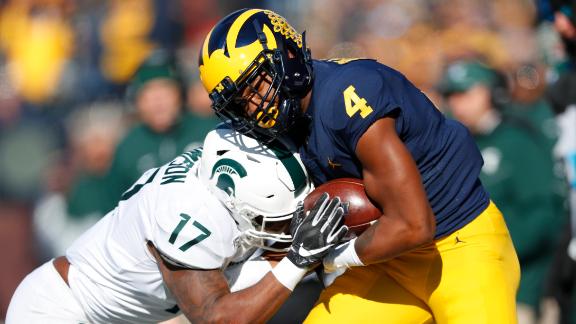 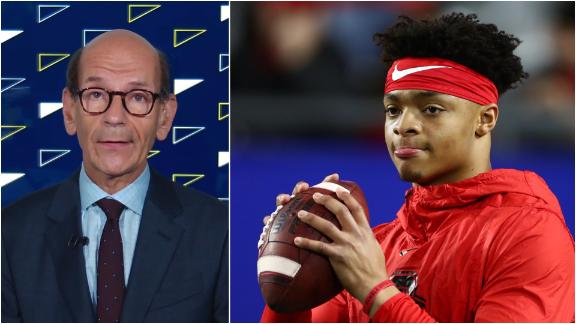