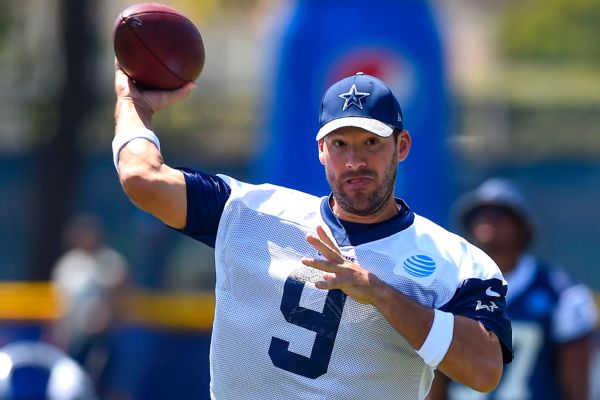 FRISCO, Texas -- For the first time since suffering a compression fracture in his back on Aug. 25, Dallas Cowboys quarterback Tony Romo is on the practice field.

Wearing a blue Cowboys T-shirt, blue shorts and his game cleats, Romo was not in full uniform but he was able to throw passes without any issues during the portion of practice open to the media Wednesday.

Aside from longer throws during pre-practice warm-ups, Romo's throws were anywhere from 5-25 yards in length and had good velocity. He took some turns simulating dropbacks and rollouts. He also alternated with Dak Prescott and Mark Sanchez in throwing passes to the Cowboys' backup receivers and tight ends.

At his news conference, coach Jason Garrett said Romo would not practice Wednesday and was unsure whether the quarterback would do more later in the week.

"We'll just take it day by day," Garrett said. "He's had some good days of rehab, though, lately."

Romo suffered the injury on the third play of the Cowboys' preseason game against the Seattle Seahawks. At the time of the diagnosis, he was given a six- to 10-week recovery period. It will be nine weeks on Thursday.

Romo has been doing resistance training in his rehab for the past two weeks and has been adding to his throwing program over the past few weeks.

Prescott will start Sunday against the Philadelphia Eagles. He has seven touchdown passes and just one interception, helping the Cowboys post a 5-1 record to start the season.

The Cowboys have not stated what they will do at the position once Romo is completely healthy. Owner and general manager Jerry Jones has said Romo is the Cowboys' "No. 1 quarterback," but he has also said they will let it play out.