Trainer to talk to Belmont about strip 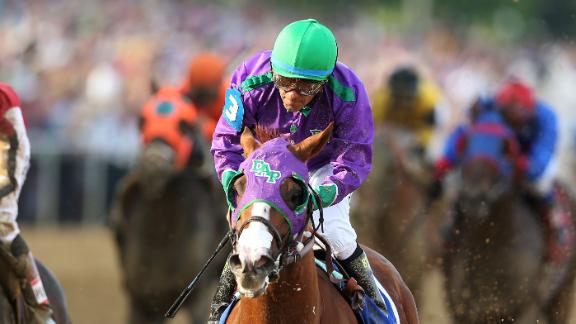 BALTIMORE -- California Chrome's bid for the Triple Crown might be abandoned if New York racing officials do not allow the colt to wear a nasal strip in the Belmont Stakes.

Trainer Art Sherman suggested it was a possibility, although he made no threats about California Chrome passing on a chance to become horse racing's 12th Triple Crown winner.

After meeting with the New York Racing Association stewards (Steve Lewandowski, Dr. Ted Hill and Braulio Baeza) and after receiving a statement from the New York Gaming Commission saying the commission is handing over discretion on this matter to the stewards, Martin Panza, director of racing for NYRA, said Sunday afternoon he reached out to assistant trainer Alan Sherman to say he or Art Sherman simply needs to call the stewards and make a formal request for permission to use the nasal strip. It will then be up to the stewards, with Lewandowski being the deciding vote, if the request is granted.

Alan Sherman, who is Art's son, originally told ESPN's Jeannine Edwards that he will make the request in person on Tuesday when he and the horse arrive at Belmont, but later Sunday, Art Sherman told Edwards that the camp had changed its mind, and that a formal request has already been made.

Among the gaming commission's rules governing Belmont Park is one that states: Only equipment specifically approved by the stewards shall be worn or carried by a jockey or a horse in a race.

California Chrome, the Kentucky Derby and Preakness winner, has worn a nasal strip during his current six-race winning streak after co-owner Perry Martin wanted to try it. Sherman is based in California and said he wasn't aware that using one in New York might be a problem. He said he would talk to New York racing officials and the horse's owners.

Some horses, like humans, wear nasal strips to assist breathing. The colt wears the strip only during races, not training.

At 1½ miles, the Belmont on June 7 is the longest and most grueling of the three Triple Crown races.

"I think it opens up his air passage and gives him that little extra oomph that he needs, especially going a mile and a half," Sherman said. "Anytime you can have a good air passage, that means a lot for these thoroughbreds."

"This guy, Perry Martin, he might not run if they say you can't run with a nasal strip. He's very funny about things like that,'' the trainer said. "I don't know why they would ban you from wearing one. We'll have to cross that bridge when we get there.''

Other states allow nasal strips while racing, and even some jockeys wear them.

"It's something nonmedical that can be beneficial to a workout or a race," California-based trainer Doug O'Neill said by phone. "If you think your horse could use some help with their nostrils, you do it."

Two years ago, O'Neill trained I'll Have Another to victories in the Kentucky Derby and Preakness with the colt wearing a nasal strip. New York officials told O'Neill that his horse couldn't wear one in the Belmont. The issue became moot when I'll Have Another was scratched the day before the race because of a leg injury.

A horse hasn't won the Triple Crown since Affirmed in 1978. Since then, 12 horses have won the first two legs and failed to complete the sweep in the Belmont.

"I can't imagine them being that ignorant that they would do that again," O'Neill said. "New York has gotten a lot better with common sense. It seems like a more rational place now."

The NYRA has put in place several new officials since 2012, including Panza, the former racing secretary at defunct Betfair Hollywood Park in California who now oversees racing operations at Belmont Park, Saratoga and Aqueduct.

The rulebook for Belmont Park that establishes race conditions does not specifically mention nasal strips.

Sherman said California Chrome came out of Saturday's Preakness in good shape, emptying his feed tub after the race.

The colt playfully nibbled on his leather shank outside the barn as his two front legs were washed off Sunday. A worker removed a poultice from each lower front leg, which had been applied under bandages as a precaution to protect the colt's tendons.

The nasal strip could prove insignificant, as did California Chrome's cough that had no impact on his Preakness run. The colt has a small blister in his throat that caused him to cough last week, triggering rumors that he wouldn't run at Pimlico.

No Slowing Down In Quest For Triple Crown
California Chrome's co-owner and trainer discuss the win at the Preakness Stakes and the road to Belmont.