Tristan Thompson not buying that he hasn't earned money 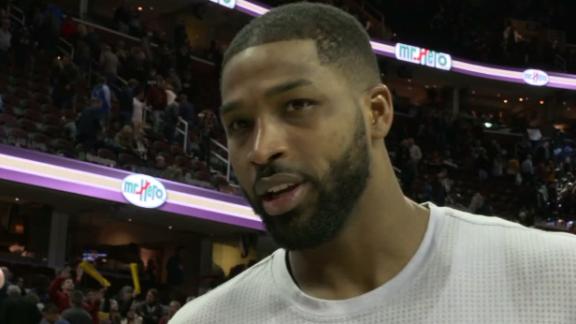 CLEVELAND -- When LeBron James questioned the Cavaliers' commitment to winning last week -- thus questioning owner Dan Gilbert's commitment to spending -- there was a near-universal counter argument to James' claim: His urging the organization to take care of teammates J.R. Smith and Tristan Thompson in free agency the past two summers is a major reason Cleveland is in its current luxury tax bind in the first place.

Following the Cavs' 107-91 rout of the Oklahoma City Thunder on Sunday, Thompson -- who, like James and Smith, is represented by Rich Paul of Klutch Sports -- had something to say about his role in the controversy.

"I earned my money," Thompson told ESPN of his five-year, $82 million extension he signed in 2015. "LeBron's not my agent. I earned my money doing what I do; you can ask anyone around the league. I opened doors for other guys. It's a business, and you get paid what the market value is for you. I got my money and opened up doors for other guys that play hard and do the little things."

It was as good a time as any for Thompson to speak up. He just came off his strongest game of the season -- 19 points, 12 rebounds, 4 steals and 4 blocks (2 of which came on Russell Westbrook) -- as he anchored a Cleveland defense that held the Thunder to 37 percent shooting as a team while Westbrook scuffled through a 7-for-26 outing.

"For me, the way I judge a game is what I do on the defensive end," Thompson said. "That's what my calling is, right? So, making it tough for [Steven] Adams, keeping him from getting a double-double, it's a good game. Obviously the scoring, that's extra, that's a cherry on top, that's a bonus. So as long as I take care of what my duty is every night, everything else is extra."

The call for everyone to do a little extra on a nightly basis was actually Thompson's response to James' screed from last week, when Thompson cut loose a bit on his own, dropping eight curse words Thursday during a media session that lasted just more than seven minutes.

"LeBron is the leader on the team," Thompson said. "He's going to make his comments. At the end of the day, we all got to play better from the top to bottom. Players got to play better, we got to prepare. Everyone. Everyone that's part of this journey -- coaches -- we all got to be better. Everyone has got to take a step forward and just be 1 percent better. So, LeBron's comments is what it is. I really don't give a f---. I just got to keep playing better. We got to keep playing harder. And he's right, we got to all play better. It's simple. You see the horses--- out there that we're doing."

The Cavs gladly rallied around Thompson's play Sunday, which was just as bold as his words.

"It's about time," Kyrie Irving said of Thompson's effort. "It's about time, and he knows it too. Really being our anchor on the back side of the defense. When he's doing that as well as rebounding and contesting shots, he's amazing. He knows what he means on this team, and he needs to play at a high level, especially in that center role, to be the anchor for our defense."

And James, in true form, managed to compliment Thompson while tweaking Cavs' management yet another time in the same breath. "He's the one rim protector that we have, and we need him to continue to do that," James said, taking a thinly veiled shot at the Cavs' roster construction. "Making guys adjust their shots, blocking shots, cleaning glass. You know he's going to clean glass, but when he's active like that -- trying to get shots blocked and things of that nature, it helps us a lot."

The verbal spars between James and the team might continue -- a team source recently pointed out to ESPN that Forbes' estimation that the Cavs lost $40 million last season was actually too low a figure - but Thompson is impervious.

"Every year [there is somebody]," Thompson told ESPN. "Whether it's JaVale McGee, then [Nikola] Vucevic, [Kenneth] Faried, then myself, [Bismack] Biyombo, [Timofey] Mozgov got paid this summer too, extra. It's a trickle-down effect. It's whatever the market value is. So, I'm not worried about that. Whatever the market value is, you got to pay. It's part of the business.

"At the end of the day, I'm going to do my job. That's what it's about. Do my job and do whatever it takes to win and do what my teammates need me to do. I don't need to go out there and try to prove myself or prove my contract. I already earned my keep, but the key is to keep building every day and never be satisfied."