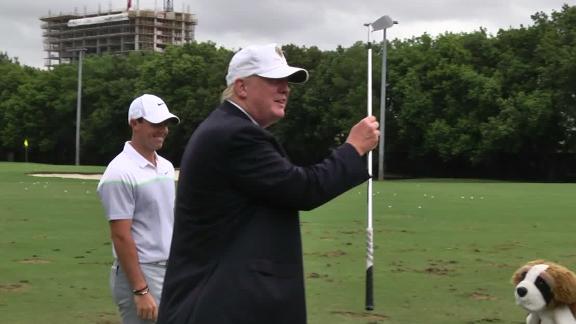 And he used it to hit another shot in the water, then feigned throwing the club in after it.

McIlroy hit his third in the water at the 18th, leading to a double-bogey 6 and a score of 72. He still tied for 9th.

Trump, the financial mogul, who has been very visible this week at the WGC-Cadillac Championship, had a scuba diver retrieve the club Saturday from the pond near the eighth hole, where McIlroy had tossed it in anger during Friday's second round.

"It's unlucky to have only 13 clubs," Trump told McIlroy as he was warming up on the driving range before the final round.

The two chatted for a few moments, and McIlroy put the club in his bag. He had said Saturday that he played the third round without a replacement club but that he would use it Sunday "if needed."

Trump said afterward that he will be getting the club back after the round.

"We'll either donate it to charity or mount it," Trump said. "But I'd really like to mount it [in the clubhouse]. That was a beautiful moment. He did it [threw the club] with such elegance. We'll do one or the other.

"He's a great kid, a great player. Anything he does is news. It showed a human touch. He's a fantastic person."

Trump, 68, is an avid golfer and has been big in the purchase of high-end golf properties, including Trump National Doral and the Turnberry Resort in Scotland, which has hosted four Open Championships.

Somebody wondered how many clubs he's thrown and Trump said: "Don't ask that question. Too many. But none in that lake."

Although the setup of the Blue Monster course is out of his hands and left to PGA Tour officials, Trump acknowledged that he wasn't pleased when J.B. Holmes shot an opening-round 62 -- even though he bettered the next score by four shots and the course average for the day by more than 11.

"It was a great round of golf, but someday they are going to set it up really, really hard just to see what happens," Trump said.

McIlroy is headed to Augusta National this week to play a practice round with his father, Gerry, and New England Patriots quarterback Tom Brady. He is scheduled to play the Arnold Palmer Invitational beginning March 19.

"Game's just not quite there," he said. "I've got a week off now to try and work on it a little bit. Pretty disappointed with how I played overall. I felt it was a little better again today for the most part. Bit of a disappointing finish. Just not quite 100 percent."

Iron Play Rory's Downfall At Doral
World No. 1 Rory McIlroy explained which parts of his game have been lacking this week at the WGC-Cadillac Championship.