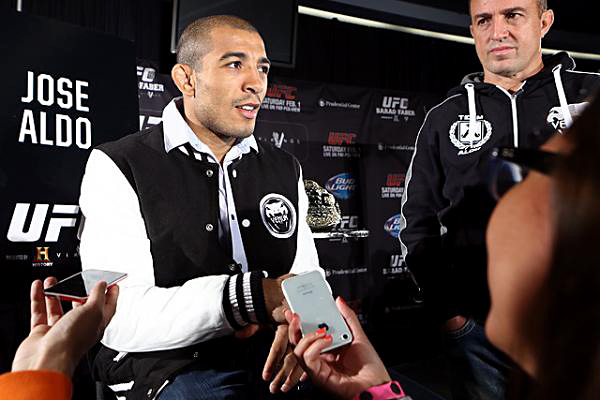 Aldo (26-2) created headlines earlier this month when he abruptly stated he no longer wished to fight for the UFC. The comments were made shortly after the promotion company booked a fight between Eddie Alvarez and Conor McGregor, with whom Aldo has sought a rematch.

Aldo said the meeting went well and there would likely be others. He did maintain, however, he has no current interest in furthering his mixed martial arts career.

"I didn't come here just wanting to cancel my contract," Aldo said in quotes translated by ESPN.com. "I came here because I had a lot on my chest that I wanted to say. And that's what was done. I will follow my own path and UFC will follow theirs. Time will tell what the future holds.

"I came here from Brazil already with ideas firmly fixed in my head. My current intention is to no longer fight. That hasn't changed. That's how I felt when I left Brazil and that's how I feel today."

Aldo's longtime coach and mentor Andre Pederneiras, who accompanied Aldo to the meeting, told ESPN.com they have requested changes to Aldo's existing contract with the UFC that would allow him to compete freely in other martial arts.

According to Pederneiras, who coaches a full stable of athletes at Nova Uniao in Rio de Janeiro, White is supposed to speak to the UFC's new owners at WME-IMG and respond to Aldo's request in the near future.

"He wants to end the contract, but Dana says he can't do that," Pederneiras said. "I know that, but maybe have some addendum written into the contract to do other things like kickboxing, jiu-jitsu or boxing.

"I think Dana was open to that, but he said every time [Aldo] wants to do that, he needs to ask permission. He's not going to do that. If he's fighting MMA, OK, he can't fight MMA in another organization. If he wants to come back to MMA someday, it will be in the UFC. But he doesn't want, every time he takes a fight in jiu-jitsu, to call Dana or send him a letter if he wants to box. We are trying to get an addendum in the contract to separate MMA, so he can compete in other sports any time he wants."

A UFC official told ESPN.com that Wednesday's meeting was "productive" and there would be no further comment at this time.

Aldo declined to go into detail on the reasons he no longer wishes to fight, but Pederneiras said it's directly tied to the aftermath of his loss to McGregor at UFC 194 last December.

That loss, a 13-second knockout, snapped Aldo's streak of seven consecutive title defenses. Based on his resume, Aldo felt he deserved an immediate rematch and a chance to prove the loss was a fluke -- but McGregor went on to fight Nate Diaz at UFC 196 instead.

According to Pederneiras, Aldo felt so disrespected at not getting a rematch, he wanted to walk away from the sport entirely. Pederneiras says he talked Aldo into accepting a fight against Frankie Edgar at UFC 200 on July 9, based on one condition.

"He was waiting for that immediate rematch and it didn't happen," Pederneiras said. "He said, 'These guys don't respect me. I've been champion for so long. I'm the only champion of the featherweight division. If anybody should get an immediate rematch, why not me?'

"After this, Dana and [UFC matchmaker Sean Shelby] called me and asked him to fight Frankie Edgar. I said, 'It's going to be difficult but I'll try.' I talked to him for a month and I convinced him only because we said, 'Dana, he'll fight, but if you want this fight, the next one is with Conor.' And they said, 'Yes.'"

Aldo said he has no intention to reach out directly to WME-IMG, as he feels confident his feelings were well represented to White on Wednesday. When asked if he intends to seek legal means to terminate his contract, he said no.

"If I had no contracts, if I had nothing binding me or had no other negotiations going on, I still wouldn't see myself fighting again. I think I have already done a lot for the sport and I have to go my own way. Of course, I have a contract and I must respect that contract. Like I said, I came here to have a first conversation, start a dialogue, speak face-to-face. It went really well."
Related topics:
sportsespnmmaufcjose aldodana whitefighters
Copyright © 2020 ESPN Internet Ventures. All rights reserved.
More Videos
From CNN Newsource affiliates
TOP STORIES