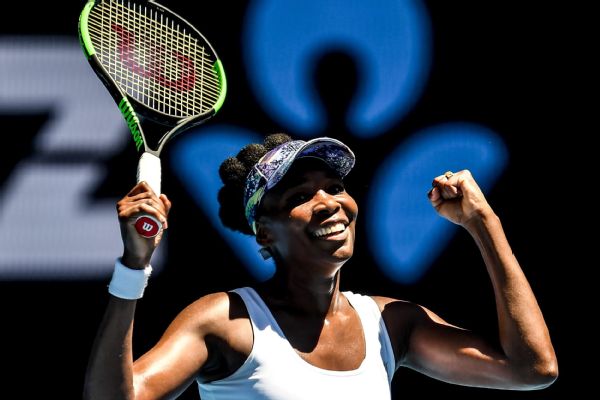 MELBOURNE, Australia -- Amid all of the back-to-the-future, glory-days-revisited hysteria down here, the greatest revelation has been Venus Ebony Starr Williams.

The last time she made the semifinals of the Australian Open was 2003 -- the same year Roger Federer won his first Grand Slam; the same year Australian wild cardDestanee Aiavaturned 3 years old.

On an exceedingly pleasant Tuesday at Melbourne Park, Williams defeated Anastasia Pavlyuchenkova 6-4, 7-6 (3) -- and, 14 years later, soared back into the semifinals.

Her victory produced yet another slice of history:

Williams, at 36, is the oldest woman to reach the final four here in the Open era.

"Oh my gosh, I'm so excited," Venus said in her on-court interview, her voice rising. "I want to go further. I'm so happy to be in a position to go further."

The return for Venus to the Australian Open semis will be in the form of an all-American showdown against Coco Vandeweghe.

"What a wonderful result," said Venus in her postmatch interview. "It's a great win for the U.S. To have that thought that there's going to be at least one U.S. player in the final is great for American tennis.

Swinging for the fences, as always, Venus kept the pressure on the No. 24-seeded Pavlyuchenkova, who was a two-time junior Australian Open champion. The Russian made life difficult for herself, serving nine double faults, two of them in the critical second-set tiebreaker.

Venus, who won her 50th match at the Australian Open, has yet to drop a set.

And to think that a year ago, Venus lost in the first round here, and as recently as three weeks ago, she withdrew from a tournament in Auckland, New Zealand, with a sore right arm. That caused Venus a great deal of anxiety coming into this tournament, she said.

Does Venus think she can win this thing?

"Why shouldn't I?" she said. "I try to believe. Should I look across the net and believe the person across the net deserves it more? This mentality is not how champions are made. I'd like to be a champion, in particular this year.

"The mentality I walk on court with is: I deserve this."

Williams' next opponent is a refreshingly free spirit.

After hitting a dreadful serve in Tuesday's quarterfinal match against Muguruza, Vandeweghe said only partly to herself, "This is like something in a bad novel."

Well, reality was stranger than fiction at Rod Laver Arena, as the 25-year-old Californian stunned the reigning French Open champion and No. 7 seed here.

Vandeweghe, who won the last seven games, has been as hot as the Aussie sun at Melbourne Park in reaching her first career major semifinal.

With Serena Williams in Wednesday's quarterfinals, opposite Johanna Konta, there could be three Americans among the four semifinalists.

The last time that happened at a major was 2002, when Serena, Venus and Lindsay Davenport reached the final four at the US Open.

Unlike many professional tennis players, Vandeweghe, who called herself "a work in progress," speaks her mind.

"Once I got rolling in the second set," she said in her on-court interview, "it was like a freight train. Couldn't stop it."

Her path hasn't been easy. The unseeded Vandeweghe, who took out No. 1 seed Angelique Kerber in the previous round, has now beaten the two women who won three of the four Grand Slams a year ago -- back-to-back. And now, she has won 17 of her past 21 games.

"It's amazing to be in a semifinal," Vandeweghe said. "But, you know, not satisfying. I want to keep going, keep playing. There's more things to do out on a tennis court that I'm hoping to achieve."

Vandeweghe has never been ranked higher than No. 29, but she clearly enjoys the big stage. Incredibly, this was her sixth win over a top-10 player in her past seven matches. The one loss? To Muguruza last summer in Cincinnati. This was the 10th top-10 win of Vandeweghe's career.

"Maybe I play better nervous and scared," she said. "I don't know. I think I don't shy away from a challenge, necessarily. I never have. Growing up, I've always just been wanting to prove people wrong in a lot of different regards. I think it's more I take it as a challenge. I take it as an enjoyable challenge. It's what I want to do. It's where I want to be.

"To face the best players is definitely an accomplishment, to say for myself that I've gotten to the point that I've beat and face these top players."

Was this the performance of a lifetime?

"Sadly, no," Vandeweghe said. "I really wasn't feeling all that great out there."

And then Vandeweghe proceeded to tell the crowd at Rod Laver Arena that she warned her coach, Craig Kardon, to have the toilet paper ready.