Will Muschamp returns to Auburn 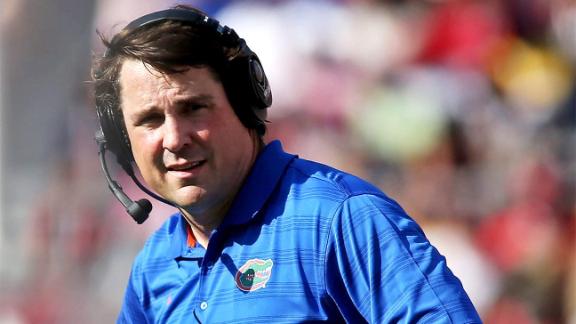 Muschamp agreed to a three-year deal with the Tigers, sources close to the situation told ESPN. The deal is worth between $1.6 million and $1.8 million annually, sources said, which will make him the highest-paid defensive coordinator in FBS.

"I'm excited to welcome Will back to Auburn as our new defensive coordinator," Tigers coach Gus Malzahn said in a statement. "Will is a one of the top defensive minds in college football who has great passion and energy for the game. He is a tremendous addition to our staff."

Muschamp chose the Auburn position after interviewing for Houston's head-coaching job. He was also courted for defensive coordinator jobs at South Carolina and Texas A&M.

"My family, Carol, Jackson, Whit, and I are excited about coming back to Auburn and I look forward to working with Coach Malzahn to win championships," Muschamp said in the statement.

Muschamp will be introduced at a news conference Saturday.

Muschamp coached Florida's final two regular-season games after being fired Nov. 16. He posted a 28-21 record in four seasons during an up-and-down tenure that included an 11-2 record and SEC coach of the year honors in 2012.

The Gators' biggest struggles came on offense, not on the side of the ball that is Muschamp's specialty.

Muschamp's new salary will not affect the $6.3 million buyout Florida owes him after he was fired with three years remaining on his contract, sources said.

Before accepting the Florida job in 2011, Muschamp was the head-coach-in-waiting at Texas and was regarded as one of the top defensive coordinators in the country. His Longhorns defenses led the nation with 119 sacks from 2008 to '10.

He also guided defenses at LSU under Nick Saban from 2001-04, and worked as assistant head coach under Saban with the Miami Dolphins in 2005.

It will be his third stint at Auburn. He worked as the Tigers' defensive coordinator from 2006 to '07 under Tommy Tuberville, and was a graduate assistant there from 1995 to '96.

Information from ESPN's Brett McMurphy and Joe Schad and The Associated Press is included in this report.