Williams: 'Nobody' came to funeral 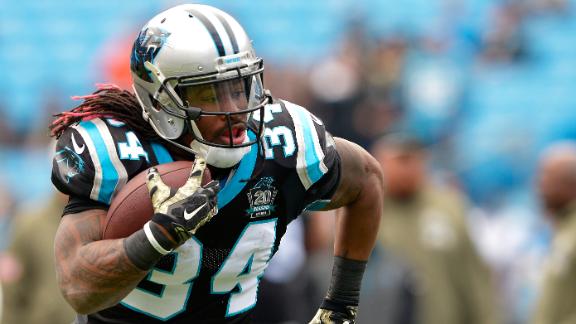 CHARLOTTE, N.C. -- Carolina Panthers all-time leading rusher DeAngelo Williams says as a result of the way the organization treated the death of his mother to breast cancer in May that he wasn't upset when told last week he would be released.

Williams told Charlotte's WBTV, in an exclusive interview that aired Monday night announcing he would be released, that defensive end Greg Hardy was the only member of the organization to attend his mother's funeral in Arkansas.

The funeral was on May 24, 11 days after Hardy was arrested on domestic violence charges in Charlotte. Hardy recently had the charges dropped.

"One player came," Williams told WBTV. "And there is nothing that he can say or do in my eyes that is bad. ... Greg Hardy. All the players around the league, all the players in the locker room, they texted and called. But Greg Hardy showed up."

Williams told WBTV he met with general manager Dave Gettleman and coach Ron Rivera last week. He said that's when they informed him he would be released.

The interview was taped Saturday and aired at 11 p.m. ET Monday.

The Panthers said Williams has not been officially released and did not give a timetable for when that might happen. Williams has one year left on his contract and is scheduled to count $6.3 million against the 2015 salary cap.

Williams said Gettleman and Rivera told him the decision came down to not running the ball enough to keep him and Jonathan Stewart on the roster.

Stewart emerged as one of the league's top backs when Williams missed the final four regular-season games and a playoff game with a broken hand. Stewart is set to count $8.3 million against the cap in 2015.

Along with fullback Mike Tolbert, set to count $3.4 million against the cap, the Panthers have $18 million tied up in three backs with Williams on the roster. That Williams was limited to only six games last season due to injuries and is set to turn 32 in April also were factors in Carolina's decision.

Williams told WBTV he understood that part of the business and "I kind of knew the writing was on the wall."

It's the way his mother's death was handled that bothered him more than being released.

Williams said he called Rivera when his mother died to inform him "she's gone."

"Coach Rivera said, 'I'm sorry to hear that,'" Williams said. "And right after that, Dave Gettleman called. He was like, 'Man, we're praying for you.' I was like, 'I really appreciated it. Thank you so much.'

Williams said team owner Jerry Richardson didn't say anything to him until weeks after the funeral, after his first-person story about his mother was published in Sports Illustrated.

"I wrote the article," Williams said. "I come back and there is a letter from the owner saying, 'I read this story. It's really nice love story between a son and his mom.' That was it."

Williams called Richardson's failure to reach out beforehand "extremely disappointing" but said Richardson did apologize to him in July during training camp.

"I was so upset with Carolina, because for the last five or six years during October she was celebrated," Williams said of his mother and the breast cancer awareness program they helped the NFL begin several years ago. "But then when she's no longer here, let's move on.

"I'm not saying this now because they're releasing me. ... But it stung to know that a place of business that you work for and that you've bled and played through injuries, you did everything you possibly can for this organization to be successful, and then upon your darkest hour they let you handle it by yourself."

Williams told WBTV the entire conversation with Gettleman and Rivera last week lasted around 10 minutes. He said that was the last he's heard from the team.

Gettleman said last week at the NFL combine in Indianapolis that he'd had a conversation with Williams and there likely would be more.

"I spoke to DeAngelo. We had a great conversation. It's confidential. It's between us," Gettleman said. "DeAngelo had a tough season. He lost his mom, who he was very close to. Then came the season and he just couldn't stay healthy. It was really hard for him.

"Then he broke his hand against Minnesota. That's hard. Especially when you're 32. But he finished the season like a pro's pro and like a man's man. I really respect DeAngelo for the way he finished it."

Asked directly if Williams would be a part of the team in 2015, Gettleman said, "I'm going to leave it where I just left it."

Williams has been with the Panthers since they made him the 27th overall pick of the 2006 draft. He has 6,846 career rushing yards and 46 rushing touchdowns, both team records.

He said he doesn't "feel bitter at all." He also said the interview with WBTV was the only one he was doing on his release.

"[Stewart] had the hot hand at the end of the season," he said. "He's a great running back, obviously. I don't feel bitter at all. It's a business. And that business comes back and reminds us year after year -- whether it be Steve Smith, whether it be Jordan Gross, whether it be myself -- it's going to happen to every guy in that locker room, so it doesn't bother me at all."

The Panthers released Smith, their all-time leading receiver, during the offseason last year.

Carolina outside linebacker Thomas Davis, the Walter Payton Man of the Year, reached out to Williams on Twitter shortly after receiving the key to the city of Charlotte during a special ceremony at the city council.